This says it all

Michael Tracey‏Verified account @mtracey  8h8 hours ago
Replying to @mtracey
All that said, the rhetoric around Russia -- treason, foreign infiltration -- is conducive to an unstable person doing something violent.
44 replies108 retweets334 likes

There's no need to say anything else.

Wednesday, June 14, 2017.  The Mosul Slog continues, the use of White Phosphorus gets a little  attention, and much more.

A woman and a child died of food poisoning on Tuesday after hundreds of displaced people fell ill on Monday when they ate food during Ramadan breaking fast meal at al-Khazir-2 refugee camp near the city of Mosul, a medic and a Kurdish official said.
"Unfortunately, a woman and a female child died out of more than 800 cases of food poisoning among the displaced people after eating their Ramadan breakfast the day before," the medical source told reporters.


Emma Graham-Harrison (GUARDIAN) adds, "The food handout was funded by UK-based Help the Needy Charitable Trust, which said it raced doctors and other medical support to the camp as soon as it was told of the poisoning outbreak."

A mass food poisoning at a camp for displaced people near Mosul, Iraq, kills at least 2 and sickens hundreds cbsn.ws/2s6Jlyz 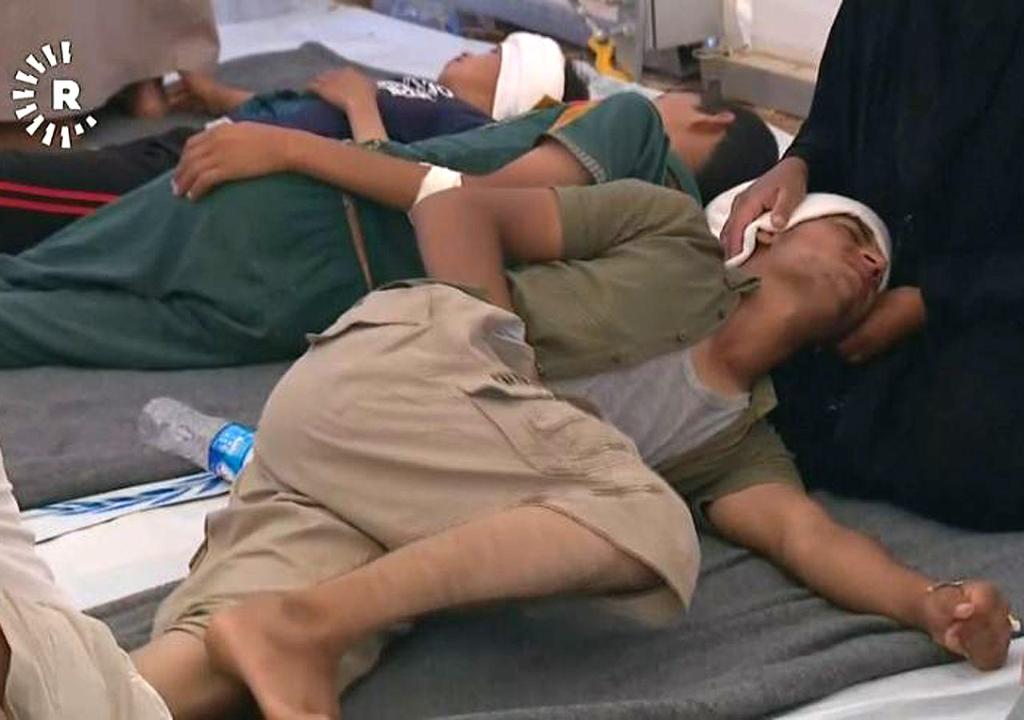 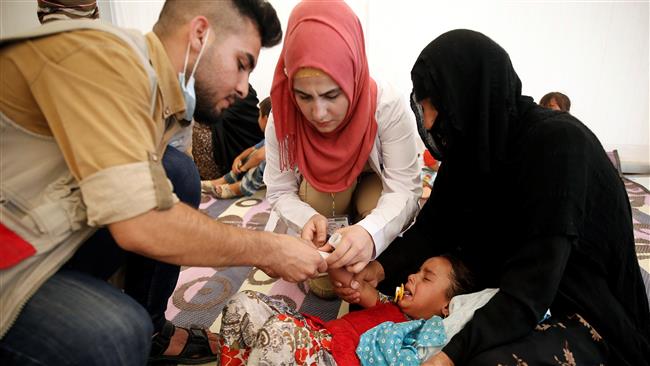 While little is known, accusations are being hurled.  Balint Szlanko and Sinan Salaheddin (AP) report:

Irbil Gov. Nawzad Hadi said the food was prepared in an Irbil restaurant by a local NGO, Ain el Muhtajeen, and funded by a Qatari charity known as RAF. In Saudi Arabia, which has been leading a recent campaign to isolate Qatar, state media quickly seized on the issue with coverage that implied Qatar was poisoning refugees deliberately.


An Iraqi lawmaker who visited the camp overnight also accused the Qatari charity of providing the tainted food.

The refugees are the product of The Mosul Slog -- an operation that's supposed to liberate Mosul which was seized by the Islamic State three years ago.

But the operation was also supposed to last only a few days and it's day 238 of The Mosul Slog.

Its 11 Am is #Mosul Old city extremely fierce clashes on the southern front and the smoke continues to cover the sky. #Iraq


Recently, it's been from White Phosphorus.


The use of artillery-delivered white phosphorus by the United States-led coalition fighting Islamic State (also known as ISIS) forces in Syria and Iraq raises serious questions about the protection of civilians, Human Rights Watch said today. This multipurpose munition should never be used as an incendiary weapon to attack personnel or materiel in populated areas, even when delivered from the ground.
“No matter how white phosphorus is used, it poses a high risk of horrific and long-lasting harm in crowded cities like Raqqa and Mosul and any other areas with concentrations of civilians,” said Steve Goose, arms director at Human Rights Watch. “US-led forces should take all feasible precautions to minimize civilian harm when using white phosphorus in Iraq and Syria.”
White phosphorus munitions can be used for several purposes on the battlefield: as an obscurant or smoke screen, for signaling and marking, and as an incendiary weapon. US forces are using white phosphorus in both Mosul, in Iraq, and in the ISIS stronghold of Raqqa, in Syria. But the rationale for its use by US-led coalition forces is unclear as the coalition does not comment on specific incidents.
Human Rights Watch was not able to independently verify whether the use of the munitions resulted in any civilian casualties. A Raqqa resident living in Beirut told the New York Times that an internet cafe in Raqqa was recently hit by white phosphorus, killing around 20 people.
[. . .]

Footage shot in Mosul, Iraq on June 3 also shows the use of ground-fired projectiles containing white phosphorous. Smoke from ground fires is also visible in the video, but it is unclear if these were ignited by white phosphorus or caused by something else. Since mid-February, Iraqi forces supported by the US-led coalition have been engaged in an offensive to retake densely populated west Mosul.
The purpose of this use of white phosphorus is unclear, but Iraqi Security Forces (ISF) stated on June 4 that it was used to create a smoke screen. According to a US-led coalition comment to media on the use that Human Rights Watch obtained: “While protecting civilians fleeing from the Jamouri Hospital the Coalition used smoke and precision munitions to suppress the enemy and provide cover for fleeing civilians. In conjunction with Iraqi Security Forces, the Coalition used appropriate munitions to suppress and obscure ISIS snipers so that the civilians could reach friendly forces.”
In both Mosul and Raqqa, the US-led forces are using US-made M825-series 155mm artillery projectiles containing 116 felt wedges impregnated with white phosphorus, which ignites and continues to burn when exposed to the air. This is the only type of 155mm white phosphorus projectile in US stocks that can be air-burst. Neither ISIS nor Syrian government forces are known to possess or have used these US-made munitions.
The US-led coalition states that as a matter of policy it cannot publicly discuss the use of specific munitions, but admits to using white phosphorus in its operation in Iraq and Syria. US Army Col. Ryan Dillon, a spokesperson for the US-led coalition in Iraq and Syria, told international media on June 9 that, “in accordance with the law of armed conflict, white phosphorus rounds are used for screening, obscuring and marking in a way that fully considers the possible incidental effects on civilians and civilian structures.”
In the Mosul incident, the projectiles burst very close to the ground in what seems to be an attempt to minimize the footprint of the effects. In Raqqa, videos appear to show the munitions bursting higher in the air, spreading the white phosphorus over a much wider area.
White phosphorus ignites when exposed to atmospheric oxygen and continues to burn until it is deprived of oxygen or exhausted. Its chemical reaction can create intense heat (about 815° C/1500° F), light, and smoke. White phosphorus can thus be used for marking, signaling, and obscuring, but it can also be used as a weapon to set fires that burn people and objects.
On contact, white phosphorus can also burn people, thermally and chemically, down to the bone as it is highly soluble in fat, and therefore in human flesh. White phosphorus fragments can exacerbate wounds even after treatment and can enter the bloodstream and cause multiple organ failure. Already dressed wounds can reignite when dressings are removed and they are re-exposed to oxygen. Even relatively minor burns are often fatal.


The U.S-led coalition, responding to Newsweek ’s request for comment, said it was “looking into” the accusations. But a general, New Zealand Brigadier Hugh McAslan acknowledged late Tuesday that the forces had used the munition in Mosul, but not to target combatants. “We have utilized white phosphorous to screen areas within west Mosul to get civilians out safely,” he told NPR.


Of that admission, Alison Meuse (NPR) notes, "Coalition spokesmen previously have confirmed the use of the incendiary substance in less-populated areas of northern Iraq in the fight against ISIS. But this is the first confirmation that white phosphorus has been used in Mosul."


In the US, media attention has gone to the efforts to round up and deport Iraqi Christians.  Nahal Toosi (POLITICO) explains:

President Donald Trump is facing anger and potential political blowback as his administration ramps up efforts to deport Iraqi Christians, a group he’d pledged to protect from what the U.S. calls a genocide in the Middle East.
Immigration and Customs Enforcement agents over the weekend detained dozens of Iraqi Christians and others to send back to Iraq. Many of them were picked up in Michigan, a swing state that Trump barely won in 2016 and the home of a sizable number of Christians from Muslim-majority countries who backed Trump during the presidential campaign.


We noted the Detroit round ups in yesterday's snapshot.

Bayan Taro thought the 6 a.m. knock was a neighbor asking her or her husband to move their car.
Had she known who was actually at the door, she wouldn't have sent her husband to open it.
Sarkaut Taro, a 53-year-old Nashville filmmaker, padded out in his pajamas, his wife said in an interview on Monday. After a few moments, he called out for his wife.
When she came to the door, she said she saw her husband in handcuffs surrounded by unidentified men and unmarked vehicles.
He was arrested by Immigration and Customs Enforcement — just one of at least 12 Iraqi nationals who've been taken into custody over the past week.
[. . .]
In Nashville's Kurdish community, Drost Kokoye, of the American Muslim Advisory Council , said officers have been knocking on doors and asking questions without warrants, surrounding people with vehicles and going to their workplaces.