Pickle Roll Ups in the Kitchen

Thank you to Ambren for e-mailing me this recipe.

I had never heard of pickle roll ups.

I tried the recipe above (with ham) and loved it.

It's also a low carb recipe -- ham and pickles are basically zero carbs.  So the cream cheese is the only carb ingredient.


I hope you saw Gabriel Black's WSWS piece about tax havens for the super wealthy:

A study released May 28 by University of California Berkeley economist Gabriel Zucman and two Scandinavian colleagues, “Tax Evasion and Inequality,” demonstrates that global wealth inequality is drastically underestimated in official statistics because of how successful the super-rich are at evading taxes.


According to the paper, the super-rich, that is the top .01 percent, hide some 25 percent or more of their wealth. This is primarily due to the exploitation of offshore tax havens that allow them to avoid paying taxes where their income is actually accrued, and where they actually live.


The study demonstrates, yet again, that the super-rich are a law onto themselves, living in a world completely separate from the vast majority of humanity. Earlier this year, Oxfam reported that only eight men control as much wealth as the bottom half of humanity. However, the findings of this new paper suggest that wealth concentration is even higher.


The authors of the paper write, “The many data sets used in this article all paint the same picture: the probability to hide assets rises very sharply with wealth, including within the very top groups. As a result, offshore wealth turns out to be extremely concentrated. By our estimate, the top 0.01% of the distribution owns about 50% of it [offshore wealth].”


It's an important article.

The US bombed a hospital today. A hospital full of sick people & kids & doctors. 488 died in Iraq & Syria. Manchester is part of global war. 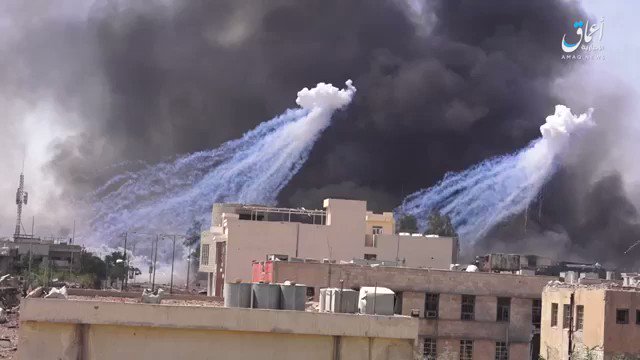 Where's THE NEW YORK TIMES' coverage of that?

They can offer this:


But not White Phosphorus coverage.


Check our archives, they've always had a problem with reporting on White Phosphorus.


Not everyone outlet in the west falls silent.  Australia's NINE NEWS reports:

Iraqi forces have been accused of using the controversial and deadly war weapon white phosphorus in an attack on ISIS-held areas in western Mosul.
An explosion was captured on a Kurdish TV station who were livestreaming on Saturday when Iraqi forces made their move.
Stills from the blast showed it appeared to have the signature bright white plume of smoke which follows a white phosphorus attack, Human Rights Watch told Al Jazeera.

The operation was supposed to last a few weeks.

Not a lot of good things to show for it.


At least 26 bodies of blindfolded and handcuffed men have been found in government held areas in and around Mosul since the operation to retake the city began in October 2016, Human Rights Watch said today.

In 15 of the cases, local armed forces told a foreign journalist that the men were extrajudicially killed by government security forces who had them in custody under suspicion of Islamic State (also known as ISIS) affiliation. In the remaining cases, reported by local and international sources, the sites of the apparent executions – all in government held territory – raise concerns about government responsibility for the killings. A foreign journalist also said that a government official told them that a Sunni Popular Mobilization Forces (known as the PMF or Hashd al-Sha'abi) unit, which is part of the government forces working to retake Mosul, was responsible for the extrajudicial killing of 25 men in their custody and dumping the bodies in the Tigris River.

“The bodies of bound and blindfolded men are being found one after the other in and around Mosul and in the Tigris River, raising serious concerns about extrajudicial killings by government forces,” said Lama Fakih, deputy Middle East director at Human Rights Watch. “The lack of any apparent government action to investigate these deaths undermines the government’s statements on protecting detainee rights.”

Extrajudicial executions during an armed conflict are war crimes and if widespread or systematic, carried out as part of policy, would constitute crimes against humanity.

Iraqi forces, including the Popular Mobilization Forces, are screening and detaining men fleeing Mosul, in some cases in unidentified and informal detention centers where they are cut off from contact with the outside world. The authorities have not released any information on the number of people detained, or being investigated or charged. Given past abuse of people detained by the PMF and other government military and security forces, Human Rights Watch has flagged concerns about detainees’ treatment, including possible executions.

On May 13 and 15, 2017, two groups of aid workers and a foreign journalist said that they saw groups of corpses, 15 bodies in all, by the side of a road between the village of Athba and town of Hammam al-Alil, about 15 kilometers south of west Mosul. The area is entirely under the control of Iraqi government forces. One group said they had driven past the area a day earlier and the bodies had not been there, suggesting they were killed on May 12 or 13.


Local armed forces at the nearest checkpoint told the journalist that they saw Iraqi “security forces” bring the men to the area and shoot them. The journalist observed many bullet casings in the area on May 15. The journalist found an identity card on one of the bodies and confirmed with a contact within the National Security Service, a security body under the ultimate control of the prime minister, that the name was on their government database of about 90,000 people wanted for ISIS-affiliation.

Some 100,000 children remain in extremely dangerous conditions in western sections of Iraq’s Mosul city as fighting between Government and terrorist forces continues, the United Nations children’s agency today reported, warning that “children’s lives are on the line.”
“We are receiving alarming reports of civilians including several children being killed in west Mosul,” said Peter Hawkins, the UN Children’s Fund (UNICEF) Representative in Iraq, in a statement, noting that boys and girls are being killed, injured and used as human shields as the fighting intensifies by the hour.
An estimated 100,000 girls and boys remain in extremely dangerous conditions in the Old City and other areas of west Mosul, he said, calling on all parties in west Mosul to keep children out of harm’s way at all times.
“Attacks on civilians and civilian infrastructure including hospitals, clinics, schools, homes and water systems should stop immediately,” Mr. Hawkins said.


Children's lives remain at stake because the government told them not to leave Mosul when the operation began and waited until late April to finally say otherwise.

Even then, the Baghdad-based government failed to provide a safe passage out of Iraq, leaving thousands and thousands at risk.

In other news, RUDAW reports:

Iraq’s internal incomes in the oil sector alone since the fall of Saddam Hussein’s regime from 2003 to 2016 had reached nearly $722 billion, of which 57 percent of this portion is exported outside of the country with another $112 billion missing.

“We have six precise reports in hand on transferring cash outside of the country, indicating that 57 percent of the cash made in Iraq is sent outside,” Ahmed Haji Rashid, head of the finance committee in the Iraqi parliament, told Rudaw.

“What the government is using now is $115 billion and the private sector retains $58 billion. But $112 billion is still missing,” he noted.

Commenting on committees formed to follow up on the fate of the cash flow out of the country, he explained, “work has been done but courts in this country are not assistive."

Nouri al-Maliki, former prime minister of Iraq and forever thug, enriched himself during his two terms as prime minister and his son also suddenly had a ton of money which was used to buy sportscars and various residences in the west.


Matt Purple (RARE) reminds the Iraq War has been a circle repeat:


That should sound like deja vu. Remember, the reason ISIS was able to rampage across Iraq in the first place was because it was welcomed by Sunnis weary of being abused by Shiite forces under the control of former prime minister Nouri al-Maliki. Now oppression has come to Sunni Iraq once again under the PMUs. Another violent Sunni counter-reaction seems inevitable, and then on we go.


The good news is that the PMUs are caught in the middle of a struggle for the future of Iraqi Shias. The three key figures to watch here are Maliki, back from ignominy and brandishing the PMUs that he helped create; Prime Minister Haider al-Abadi, who understands the PMUs are essential to defeating ISIS but wants to restrain them; and Moqtada al-Sadr, who’s reinvented himself as a populist with a focus on economic issues and wants to disband the PMUs entirely. Iraq is majority-Shia, but its general interpretation of Shiite Islam tends to be less extreme than Iran’s, meaning it’s possible that moderation may still prevail, either from Abadi’s good sense or Sadr’s outsider pressure. The PMUs themselves are also diverse—not all are committed to sectarian suppression.