Tamara is so excited that summer is over and "casserole weather is here!"  She notes this favorite casserole recipe from The Food Network:

Is a big strike coming?  Some think so.  From The Daily Mail:

The US faces the biggest strike ever as 350,000 UPS workers are set to protest over better conditions, even though delivery drivers already earn upwards of $95,000 a year.

Those represented by the Teamsters labor union are demanding air conditioning in the back of trucks, after several workers have been injured or died due to extreme heat, as well as better pay packages and benefits.

If the workers go on strike, it will be the first time the company has since 1997, when employees demanded full-time positions and the union wanted to maintain control over the pension fund.

Labor experts suspect the unionized workers will go on strike sometime during the spring while the contract is being negotiated and it will it affect the whole country.

The 1997 strike lasted 15 days and affected 80 percent of shipments, losing UPS $780million, according to Parcel.

Monday, September 6, 2022.  Moqtada al-Sadr begins his new career as ousted political star, Iraq holds another national dialogue, Jon Stewart gets called out for making an idiot move, and much more.

It is commonly said by Iraqis that theirs is a mafia state. Political actors, armed groups, tribal actors, organised crime and foreign powers collude in the capture of the state, for a variety of often conflicting ends. A Sadrist-dominated system is likely to resemble the current state of affairs, only with fewer players and greater centralisation.

Put differently, in the mafia state of Iraq, al-Sadr’s “revolution” against the corrupt political classes is less Elliot Ness going after Al Capone and more Michael Corleone moving against the other families. Given his organic base, street power and political orientation, al-Sadr is often thought of as a potential agent of change. But relying on or allying with the Sadrists requires a frank recognition of both the opportunities and the threats presented by the movement. Whether in 2003 or 2022, Iraqis’ desperation for a remedy to their country’s ills need not be expressed in credulity towards self-proclaimed saviours.

The whole column rests upon Fanar's belief that Moqtada al-Sadr is just like the fictional Michael Coorleone of THE GODFATHER saga and, thing is, I don't remember Michael being a transvestite.  Similarly, Tallha Abdulrazaq (TRT) argues that Moqtada will always have a place in Iraq.  Yes, but he will he be happy headlining a drag show?

Everyone's bending over backwards to soothe Baby Moqtada before he throws another tantrum.  Moqtada created his own problems and, look around, Iraq goes on without him.

Baby Moqtada didn't get his way so he threatened that all of his MPs would resign from the Parliament.  As with most things Moqtada, the bulk of Iraqis didn't give a damn.  So Moqtada was forced to follow through on his threat.  His cult members resigned.  Now he and they regret it.  So months after they themselves turned in their regisnations and were replaced, they're crying to the judiciary.   MEMO notes:

Lawmakers affiliated with Iraq's Shia cleric Moqtada Al-Sadr yesterday filed a lawsuit challenging the acceptance of their resignation from parliament where they held the highest number of seats, Anadolu news agency reported.

According to the state news agency INA, the Federal Supreme Court set 28 September as a date to look into the appeal.

In June, 73 MPs from the Sadrist movement resigned amid a standoff over the formation of a new government.

There should be no judicial remedy for these fools.  If you're stupid enough to resign on your own, don't come back whining -- it just demonstrates that you weren't mature enough to serve in the Parliament to begin with.  Or, like Patty Hearst in the seventies, are they claiming the quasi-psychiatric defense of coercion?  As members of the Cult of Moqtada, were they victims of Stockholm Syndrome?

And there's a lot of disgust within the Cult aimed at Moqtada.

Our girl Moqtada had a lot of luck in the past.  That may be over.  For example, some are starting to admit what we told you all along.  Sajad Jiyad, at NEW LINES, in an article entitled "The Trouble With Moqtada," offers this reality,  "The Iraqi security forces, under orders from Prime Minister Mustafa al-Kadhimi, did not engage with the Sadrists, even when they were launching rockets at the Green Zone."

Moqtada's bulls**t would never have gotten as far as it did without the go-ahead from Mustafa.  Don't forget that fact and shame on anyone who tries to pretend Mustafa is neutral.  Real protesters were hunted and killed as evidenced by what the government did to The October Revolution both before and after Mustafa assumed his post as prime minister.  But Mustafa allowed Moqtada's Cult to enter the Green Zone, put out an order that they would not be harmed.  So they did what no one had done before, they broke in.  They did so with Mustafa's blessing and, as Iraqis continue to recoil from Moqtada, they need to realize that Mustafa was working hand-in-hand with Moqtada and put out a stand-down order on behalf of Moqtada's cult.  Even now, people rush to prop up Moqtada -- our Queen in exile:

Al-Sadr’s seventh “retirement from politics” since 2013 is merely the latest gambit in a career littered with U-turns. He will lick his wounds and come back fighting as soon as he feels himself on stronger ground. In a statement that hardly sounds like a vanquished force that has withdrawn from politics, Al-Sadr’s spokesman accused the pro-Iran Coordination Framework bloc of rushing to form a government “when the blood of peaceful protesters who were killed treacherously by its militias has not yet dried.”

Yes, he will lick his wounds and come back fighting, why, he's the Judy Garland of Iraqi politics  Maybe he'll next record a live album at The Palace?

That garbage, by the way, was written by a well known liar -- Amal Clooney's mommy.  When not pretending her daughter is in a happy marriage, Amal's mommy likes to write propaganda and fan fiction.  In her mind, Moqtada will return singing Sondheim's "I'm Still Here." 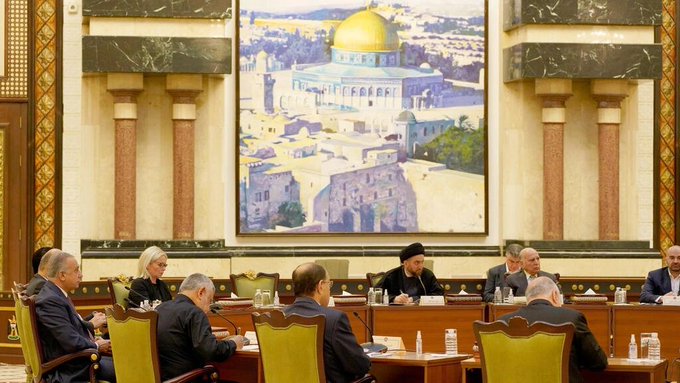 Everyone looks so much more peaceful in the photo -- what a missing Moqtada can do, Amar appears engaged, as does Jeanine Hennis-Plasschaert -- why, even the back of Nouri's bald head appears engaged.

It was the second session for a national dialogue.

Moqtada was left out.  His cult spoke with AFP:

“Blood was spilt, but there is plenty more where that came from,” the 21-year-old Sadr loyalist told AFP. “For every martyr we lose, there are 10 that will come in his place.

“The same way they sacrificed themselves for us, we will stand up for them.”

Nearly 24 hours of fighting erupted on August 29 when Sadr supporters stormed the government headquarters in Baghdad’s fortified Green Zone after their leader said he would resign from politics.

The ensuing battles — the deadliest in nearly three years — followed months of disagreements between Sadr and rival Shiite factions, as the political deadlock has left the country without a new government, prime minister or president since elections in October last year.

After last week’s unrest brought tensions to a boil, Sadr supporters said they were willing to give their lives for their leader.

“I am ready to the be the first of the martyrs,” said Taleb Saad, 60, who said he had been caught up in the violence.

“My wish is to be buried here,” he said, pointing at graves adorned with plastic flowers and large portraits of young men.

I agree, it's a toss up of whom to laugh at more, but I'll go with Taleb Saad who is now "ready to be the first of the martyrs" at the age of 60.  Oh, Taleb, where were you in 2008 when Moqtada needed you so badly for The Battle of Basra?  The Operation Charge of the Knights?

Where were you, Taleb?  Cowering most likely but I bet it was good to pretend to AFP that you were now ready.  Now.  All these years later.  Who but AFP would be dazzled by the boasts of a coward?

Staying on the topic of war, Jason Melanovski (WSWS) writes:

Comedian Jon Stewart honored a member of the notorious neo-Nazi Ukrainian Azov Batallion with a “Heart of the Team” award at the annual Pentagon-sponsored “Warrior Games” held at Disney World in Orlando, Florida, on August 19—28.

Throughout the event, US army veterans and delegations from the armed forces of allied countries compete in various athletic events intended to celebrate the US military. First held in 2010, the games are essentially a propaganda effort by the Department of Defense, intended to  promote militarism and cover up the bloody consequences of the US military’s wars for global hegemony.

The presence of the Azov veteran, Ihor Halushka, was first reported by Alexander Rubinstein for the Grayzone, an outlet that has been backing the oligarchic Putin regime in the war. When questioned by the Grayzone on who funded the presence of a neo-Nazi Azov Battalion member at a Department of Defense-sponsored event, the Pentagon refused to disclose who was footing the bill.

Halushka was not the only Ukrainian far-right element present. Along with US veterans and a team from Canada, 40 veterans from the Ukrainian Armed Forces participated in the games. The Ukrainian team included Yulia Paievska, a prominent former member of another notorious neo-Nazi paramiliary organization in Ukraine, the Right Sector. The Right Sector was heavily involved in the US-orchestrated 2014 coup that toppled a pro-Russian government in Kiev. Since 2018, Paievska has been a member of the Ukrainian armed forces.

In March, Paievska was captured by Russian forces while helping to evacuate Azov members in Mariupol at the Azovstal plant. She was later released in a prisoner swap with Russia. Despite Paievska’s well-known ties to the Ukrainian far-right, the New York Times did a lengthy feature story on her in mid-July, praising her as “a symbol of bravery and sacrifice.”

While accepting a gold medal for Indoor Rowing, Halushka prominently sported an Azov t-shirt. Later, as he was receiving the “Heart of the Team” award from Stewart, Halushka was conspicuously wearing a red-sleeve on his left arm. Photos uncovered by the Grayzone demonstrate that Halusha also possesses a Black Sun or “Sonnenrad” tattoo on his left-arm, which is popular among white supremacists and neo-Nazis worldwide. Either Halushka or his Pentagon hosts must have decided that the neo-Nazi tattoo might hurt the pro-war PR event.

Earlier in May, a white supremacist mass shooter killed 10 Black people at a Tops supermarket in Buffalo, NY while wearing the same Sonnenrad logo tattooed on Halushka’s elbow.

Stewart proclaimed that Ihor, “inspires his team with his personal example and his unique sense of humor. Sgt. First Class Ihor Halushka embodies the spirit and determination that is the heart of Team Ukraine.”

Whether Stewart was ignorant of or indifferent to Halushka’s ties to a violent neo-Nazi organization, his appearance at an event dedicated to promoting the bloody machinery of US militarism is indicative of the far-right shift of an entire layer of very well-paid, Democratic Party-aligned celebrities and pseudo-comedians. 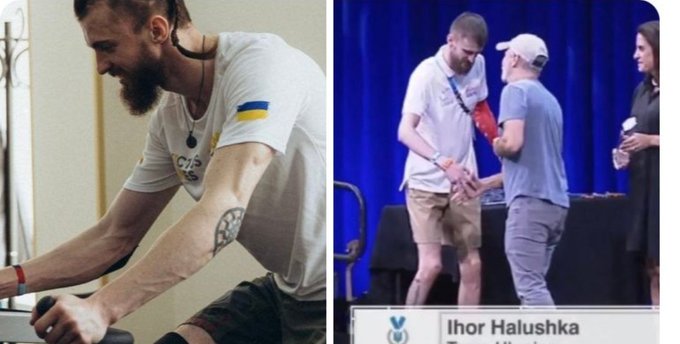 7:58 AM · Sep 2, 2022
When Jon Stewart presented this Azov Battalion veteran with a "Heart of the Team" award, he covered up his neo-Nazi Black Sun tattoo (seen below on his elbow) with a compression sleeve https://thegrayzone.com/2022/08/31/jon-stewart-pentagon-ukrainian-nazi-disney/

I'd guess Jon didn't know a thing about the neo-nazi -- I know Jon.  But I'm not covering it up for him.  Sad, though, when Bono and The Edge went to Ukraine and gave a concert with a neo nazi on stage with them, the same people howling at Jon right now, gave them a pass.  Jon deserves to be called out.  Too bad some were too busy earlier protecting their childhood crush to holld U2's Bono and The Edge accountable.

The following sites updated over the weekend: