I don't cry when some people (RC) lose a job 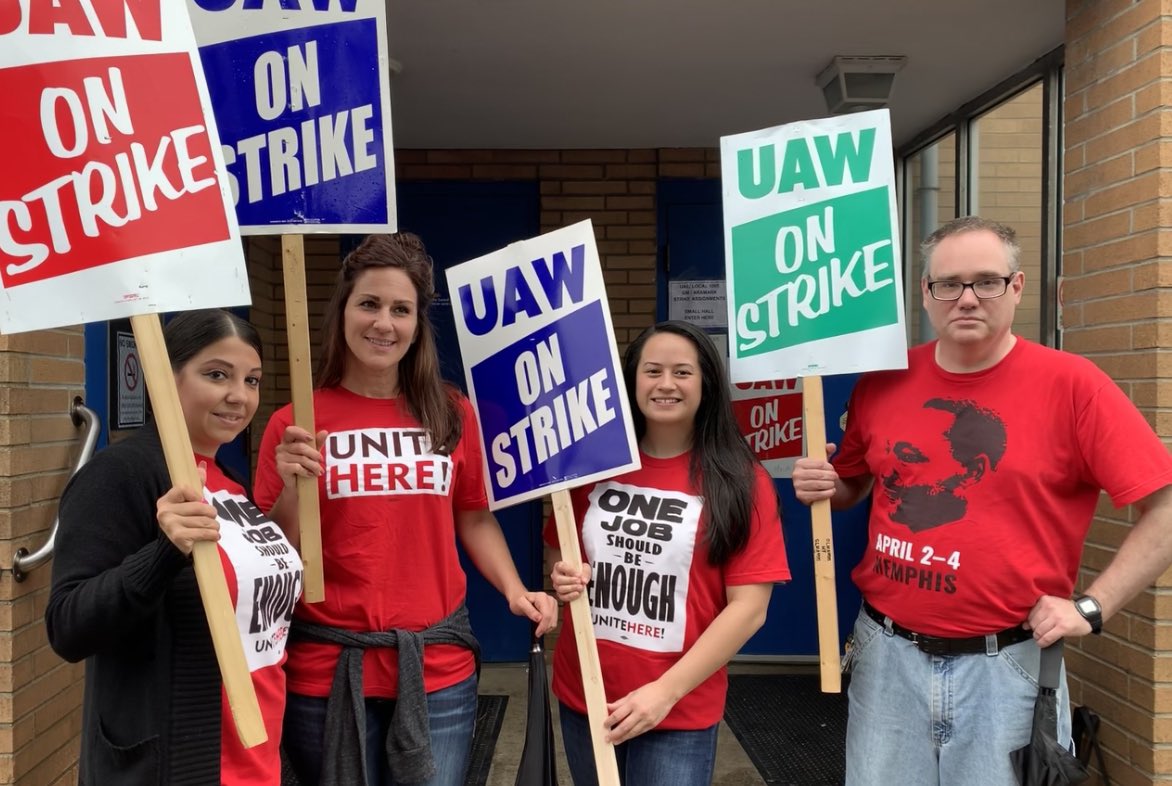 PANA‏ @ProgressiveAPIs 5h5 hours ago
PANA Retweeted Warren Gunnels
The UAW workers are taking a stand for all of us.  This is about more than the autoworkers alone, it's about everything wrong with the U.S. oligarchy.
PANA added,
Warren Gunnels @GunnelsWarren
GM just showed the country why your healthcare should not be determined by corporate bosses. Now, GM: Bring back the jobs you outsourced to Mexico, reopen the plants you have shutdown and treat your workers with respect, not contempt. #NotMeUs  https://www.huffpost.com/entry/general-motors-strike-health-care_n_5d8ced1fe4b0019647a52143 …
0 replies0 retweets0 likes


I support the autoworkers.   I hope you do as well.  They are striking to make a better life for all of us.

But I don't support all 'workers.'  For example, I was thinking I needed to check The Progressive's website to see how they were covering the strike.  I've been meaning to do that for about two weeks now.  Somewhere around 2008, though, the magazine became a joke.

And then it only got worse.

As bad as wack-job Matthew Rothschild became, his replacement -- Ruth Conniff -- was even worse.

Remember when she went on KPFA and explained that in her little corner of the world, no one went to Iraq.  How shameful.  She didn't realize how out of touch she was.

But she destroyed the magazine.  It was one fiasco after another.  Remember when, under Ruth, the magazine merged with the Center for Media and Democracy?  That was going to be huge, right?  And what was it?  Six weeks after the announced merger came the announcement that it was no more?

Ruth is a disaster.

She was an elitist and she thought she was better than everyone.

She went out of her way to attack Ralph Nader for the 'crime' of running for president.

She ran the magazine into the ground.  It was a monthly.  She drove off readers and the monthly moved to a bi-monthly.  It publishes every two months.

That's Ruth for you.

And now she's no longer editor of The Progressive.  I consider that justice -- it was slow, but it finally came.


Starting in the US where the race for the Democratic Party's presidential nomination continues.  War Hawk Joe Biden wants to be president.  And so does his family.  Including his niece who stole over $100,000 and just got a slip on the wrist (see Ruth's "Biden's only tough on crime when it comes to people of color") because, well, "as a Biden."  Joe's word as a Biden is looking even more laughable.


Apparently, Caroline Biden's family didn't use that record player enough at night or maybe they didn't have social workers coming in teaching her parents how to parent -- that's Joe's answer for African-Americans, right?  What's his answer for spoiled White kids in his own family?  Oh, right, look the other way.  Always.

Joe Biden’s brother told executives at a healthcare firm that the former vice president’s cancer initiative would promote their business, according to a participant in the conversation, who said the promise came as part of a pitch on behalf of potential investors in the firm.


The allegation is the latest of many times Biden’s relatives have invoked the former vice president and his political clout to further their private business dealings. It is the first that involves the Biden Cancer Initiative, a project Joe Biden made the centerpiece of his post-White House life following the death of his son Beau.

Biden’s brother, James, made the promise to executives at Florida-based Integrate Oral Care during a phone call on or around November 8, 2018, according to Michael Frey, CEO of Diverse Medical Management, a health-care firm that is suing James Biden. At the time, James Biden’s business partners were pursuing a potential investment in Integrate, according to Frey and court records. Frey, who had a business relationship with James Biden and his associates, had introduced the group to Integrate.

James Biden told the Integrate executives that he would get the Biden Cancer Initiative to promote an oral rinse made by the firm and used by cancer patients, Frey, who said he participated in the call, told POLITICO. He added that James Biden directly invoked the former vice president on the call. "He said his brother would be very excited about this product,” Frey said.
Crony capitalism.

Joe claims wisdom.  His family is unethical and he wants to be president?  His niece stole over $100,000 and she's not going to do time?  That's not fair, that's not fair and equal. That's the Biden corruption that runs through that family.

U.S. Senator Elizabeth Warren on Wednesday edged past former Vice President Joe Biden for the first time in a major national opinion poll for the Democratic presidential primary, making her largest gains among white voters with a college degree.
Warren drew 27% support to Biden’s 25% in a Quinnipiac University poll of Democratic voters and independent voters who lean Democratic, though her lead was within the margin of error.
The results marked a significant shift from Quinnipiac’s prior polls for the Democratic nominating contest to choose a candidate to take on President Donald Trump in November 2020. Biden had been ahead of Warren by double digits since it began polling in March and by 13 points in the same poll in August.


Joe had been ahead.  He had been.  Before people started seeing who and what he was.

And what happens to his niece is an issue  This goes to the whole 1% argument.  And this is not fair -- again, we're talking $100,000.  There are actresses who are in trouble  for using their money and influence to get their children into colleges.  But his niece steals $100,000 and she's not serving time?

If she wasn't his niece, she would be doing time.

Joe wants to be president as this happens and feels no embarrassment.  This goes back to Hunter Biden getting caught for cocaine usage while in the reserves and being allowed to walk when many others would have served time.

This goes to the issue of corruption and his family -- his brother and his son Hunter -- using his name and his positions to make money.  It's unethical.  This is not a new development.  This nothing new.  It did not develop last week, last year or last decade.  These are policies that have been in effect throughout Joe's political career -- in fact, before his career started.

Joe's allowed this unethical behavior to go on and on.  And now he wants to be president.  It is a serious issue and he needs to be asked about it and he needs to answer for it.  Serious issues are not addressed by sitting down with Jimmy Kimmel, for example.  And that's not slamming Jimmy.  He does an entertainment talk show, he has no background in news, his audience is watching for laughs.  The problem is not Jimmy or any other late night talk show host.