What do you think:

Matthew Battle ‏@librab103  8m8 minutes ago
Matthew Battle Retweeted Andrea Mitchell
So the FBI should not open investigations into people running for office because it might hurt that person's chances of winning?
Matthew Battle added,
Andrea Mitchell @mitchellreports
FBI looking at emails from unrelated case but @realDonaldTrump says proves a criminal case. Should Comey do this so close to election?
0 replies1 retweet0 likes


Andrea Mitchell's covered for Hillary from day one.

She's been their friendly go-to.

Yes, we all have a right to know.

If it's uncomfortable for Andrea or for Hillary, oh, we're so sorry.

We're so sorry that the pursuit of justice bothers you.

The press better stop trying to cover for Hillary.

I doubt it will end pretty.

Friday, October 28, 2016. Chaos and violence continue, Turkey's government is not planning to pull their troops out of Iraq, Iraq's Shi'ite militias state they are joining the Mosul operation, and much more.

In Iraq, the focus on Mosul continues and the results are . . .

But remember, no criticism is allowed.  If you offer any criticism, CNN's 'objective' 'reporter' Elise Labott will scream "NO!" in the middle of a press conference -- as she did this week when a reporter referred to the Mosul operation as a slog.

Elise Labott will allow no criticism or questioning.

And CNN will bask in the shame Elise provides them.


Saif Hameed and Maher Chmaytelli (REUTERS) report, "Iraqi Shi'ite militias said on Friday they would launch an offensive against Islamic State west of Mosul imminently, a move which would block any retreat by the Sunni jihadists into Syria but is likely to alarm Iraq's northern neighbor Turkey."

This may or may not alarm Turkey.

Of greater concern should be the issue of the region which is not going to see these militias as 'helpers' or 'liberators' but as attackers and threats to their well being.


Then there's the US government.

These militias are accused of War Crimes.

There's also the concern that Hayder al-Abadi, prime minister of Iraq, has stated that these militias will not take part.


Is there any consistent in any of this?


On that topic, Stephen Gowans (GLOBAL RESEARCH) explores the differences between the US government's views and actions in Iraq versus in Syria:

To recover Ramadi from Islamic State, Iraqi forces surrounded and cordoned off the city. [6] In addition, the US led coalition bombarded Ramadi with airstrikes and artillery fire. [7] The bombardment left 70 percent of Ramadi’s buildings in ruins. The city was recovered, but “the great majority of its 400,000 people” were left homeless. [8]
Iraqi forces also besieged the city of Fallujah, preventing most food, medicine and fuel from entering it. [9] Militias “prevented civilians from leaving Islamic State territory while resisting calls to allow humanitarian aid to reach the city.” [10] This was done “to strangle Islamic State” [11] with the result that civilians were also “strangled.” Inside the city, tens of thousands endured famine and sickness due to lack of medicine. [12] Civilians reportedly survived on grass and plants. [13] Many civilians “died under buildings that collapsed under” artillery bombardment and coalition air strikes. [14]

The current campaign to recover Mosul is based on the same siege strategy US forces and their Iraqi client used to liberate Ramadi and Fallujah. US and allied warplanes have been bombarding the city for months. [15] Iraqi forces, aided by US Special Forces, are moving to cordon it off. “Some aid groups estimate that as many as a million people could be displaced by fighting to recapture the city, creating a daunting humanitarian task that the United Nations and other organizations say they are not yet ready to deal with.” [16]
Writer and journalist Jonathan Cook commented on the utter hypocrisy of Westerners who condemn the Syrian/Russian campaign to liberate East Aleppo from Islamist fighters while celebrating the Iraqi/US campaign to do the same in Mosul. Targeting the British newspaper, the Guardian, beloved by progressives, Cook contrasted two reports which appeared in the newspaper to illustrate the Western heart beating for all except those the US Empire drowns in blood.


Central to Western propaganda is the elision of the Islamist character of the Al Qaeda militants who tyrannize East Aleppo. This is accomplished by labeling them “rebels,” while the “rebels” who tyrannize the cities the United States and its allies besiege are called “Islamic State,” ISIL” or “ISIS” fighters. The aim is to conjure the impression that US-led sieges are directed at Islamic terrorists, and therefore are justifiable, despite the humanitarian crises they precipitate, while the Syrian-led campaign in East Aleppo is directed at rebels, presumably moderates, or secular democrats, and therefore is illegitimate. This is part of a broader US propaganda campaign to create two classes of Islamist militants—good Islamists, and bad ones.


Wednesday, US President Barack Obama's Special Envoy Brett McGurk was asked at a Baghdad press conference about the US involvement on the ground in Iraq.

Brett McGurk: So thanks. Very good question. We have again, a Strategic Framework Agreement with the Government of Iraq. There are multiple aspects of that. There is education, economic support. We work very closely with your government and the IMF to help provide a foundation for your economy in a very difficult economic situation you faced over the summer. So it's a very broad relationship. And, of course, there is a security aspect to that relationship. So anything we do here in Iraq will be at the request of the Iraqi Government. So those will be decisions, ultimately, for the Iraqi Government. And I think we will, obviously, be in close consultations with them about an appropriate role to support your security forces, going forward. But utimately, everything we do here is with the approval of the Government of Iraq.


And what sort of agreement does the government of Turkey have with Iraq?

And the US government refuses to call out this violation of sovereignty -- permission to build that CIA base in southern Turkey at the end of Bully Boy Bush's second term sure paid off the Turkish government.

The Turkish government has refused to remove its troops from Iraq.


Wednesday, Barack spoke on the phone with Turkey's President Recep Tayyip Erdogan and the White House issued this statement:


The White House
Office of the Press Secretary
For Immediate Release


The President spoke by phone today with Turkish President Recep Tayyip Erdogan to discuss the next steps in the campaign against ISIL. The President recognized the contributions of Turkey, our NATO Ally, to the campaign, especially in supporting local Syrian forces who have cleared ISIL from Turkey's border in northwest Syria. President Obama noted the need for close coordination between the United States and Turkey to build on these successes and to apply sustained pressure on ISIL in Syria to reduce threats to the United States, Turkey, and elsewhere. The President welcomed continued dialogue between Turkey and Iraq to determine the appropriate level and form of Turkey's participation in the Counter-ISIL Coalition's efforts in Iraq, and both leaders affirmed their strong support for the sovereignty and territorial integrity of Iraq.  The two leaders agreed on the importance of denying the PKK a safe haven in northern Iraq.


And how did that call work out?

Turkey will continue its involvement in Syria and Iraq, Turkish President Recep Tayyip Erdogan said here on Wednesday, state-run Anadolu Agency reported.
"We are determined to stand by our brothers and sisters, who are fighting against terrorist organizations, through our diplomatic and military might if necessary," Erdogan said at the Presidential Complex.


Ishaan Tharoor (WASHINGTON POST) adds, "Turkish President Recep Tayyip Erdogan said Thursday that he had informed President Obama of Turkey's intent to participate in an offensive in northern Syria. His remarks are a reminder of the strategic conundrum facing the United States, which is working to defeat the extremist Islamic State in Syria and Iraq with both cooperation from Turkey as well as from Syrian Kurdish militias being targeted by the Turks."


FEARS are mounting that Turkish President Recep Tayyip Erdoğan is hell-bent on expanding his country’s territory after giving a string of provocative speeches referencing Turkey’s claim to more land.

The leader’s comments are fuelling speculation that the Middle Eastern nation is intent on land grabbing parts of Iraq, Syria and the Greek islands.
In one recent speech, the 62-year-old said Turkey “did not accept the borders of our country voluntarily” and mentioned the National Pact – a plan made at the end of the Ottoman Empire to conquer the Iraqi city of Mosul.


Meanwhile, in the United States, North Dakota is looking a lot like Iraq.

This military invasion of a sovereign nation is being done on behalf of a foreign oil company.  Say no, from Standing Rock to Iraq.  #NoDAPL 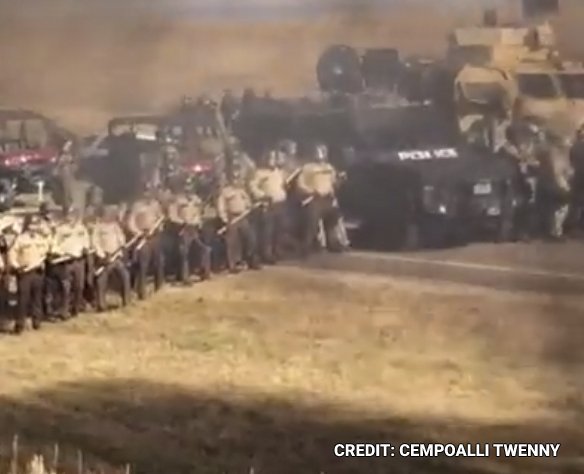 Law enforcements concept of de-esculating a protest, is to dress up like they are headed into Mosul, Iraq to drive out ISIS. #NoDAPL 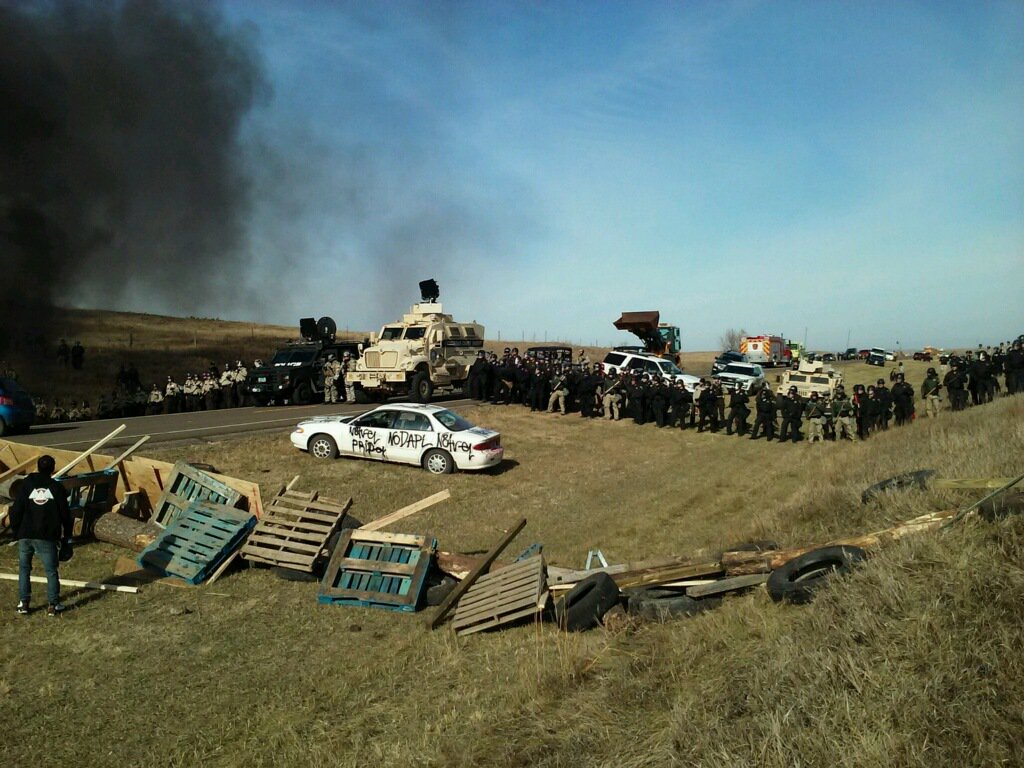