Okay, that has to be the last straw

If you're supporting Hillary and telling yourself that you're left, you've reached a point of no return. 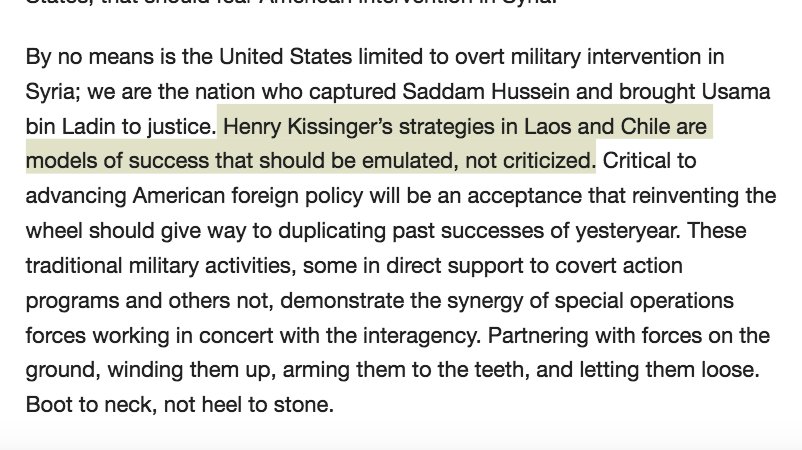 
I don't have time to educate you if you don't already know.

I can simplify that.

The US government plotted to overthrow the democratically elected government of Salvador Allende.

Millions of people were rounded up, many killed.

So don't tell me that Kissinger's policies were good.

They put Pinochet in charge.

They brought decades of suffering to Chile.

You're decision to whore for Hillary does not give you the excuse to rewrite history.

And no one who is truly on the left can ever applaud what the US did in Chile.


The advance on Mosul slowly moves along . . .

Not so liberating: Iraqi village freed from Islamic State, but then things get complicated lat.ms/2eEnnvG

As that inches along, Turkey continues to maintain it can fight in Iraq.

For those late to this story, Turkey has troops in Iraq.

The Iraqi government has repeatedly ordered them to remove those troops.

At least the United States understands the concept of national sovereignty.


The issue came up Monday at the State Dept press briefing moderated by lovely lashes John Kirby (desperately attempting to become an MSNBC star -- no joke, he's angling for a post-administration gig),


QUESTION: The rise in tensions between Turkey and Iraq. After --

MR KIRBY: Between Turkey and?

QUESTION: After Secretary Carter’s visit both Iraq and Syria, what’s the status of the – with tensions? Do you see a potential ultimate agreement?

MR KIRBY: Well, I’d let – I think I’d let each side speak for themselves in terms of where they see the tensions. What’s been important is that there has been dialogue and we’ve said all along, many months ago when tensions over a Turkish military footprint came up, that we wanted to see Turkey and Iraq talk through this and work through this bilaterally.

QUESTION: But did Secretary Carter ease any rise in tensions between them in this visit in particular?


Let each side speak for themselves?

What about national sovereignty, John Kirby?

You know, if he'd spend less time pumping Mika for tips on making it at MSNBC and more time doing his job he might make it to adequate.

Tuesday, the issue was raised again.  Still Kirby failed to stand up for sovereignty.

MR KIRBY: Said is being a gentleman.

QUESTION: I appreciate that. Thank you. So the Turkish foreign minister said today that they could launch a ground operation in Iraq. You’ve talked a lot about how Turkey is a key NATO ally. How does the U.S. feel about that?

MR KIRBY: Well, again, I’m a little reticent to talk about military operations here, but in this case what I’ll – what I would say is that, as we have made clear from the beginning of this fight against [the Islamic State], that all military activity should be coordinated as part of the larger Iraqi effort to expel [the Islamic State] from their cities, their towns, their communities. And any nation’s participation in that effort we want to be done by, through, and with the Iraqi Government’s express permission and coordination.

QUESTION: So Turkey’s involvement without their express permission and coordination would complicate that effort?


MR KIRBY: Well, I’m not going to, again, speculate for what Turkey will or won’t do. But as I’ve again said many times, that any – we would – we believe that any effort outside, done in an uncoordinated fashion, is ultimately counterproductive to the overarching goal of defeating and degrading [the Islamic State] inside Iraq. We want all military activities to be coordinated and with the permission and approval of the Iraqi Government.


Too bad there's not a presidential election going on.

If there was, the press could pin the candidates down as to where they stand on national sovereignty.

Oh, wait, there is a presidential election going on.

Doing the work the press won't do is constitutional attorney Bruce Fein who notes at HUFFINGTON POST:

President Barack Obama’s foreign policy of “Don’t do stupid s[tuff]” has been turned on its head in Iraq. The stupefying stupidity of our continuing military involvement featuring more than 5,000 American soldiers ranks with our carnival of imbecilities during the Vietnam War.


We have no definition of victory.

We are defending a Shiite government dominated by Iran, at war with Israel, hostile towards Iraqi Kurds, opposed by a NATO ally (Turkey), and brimming with corruption.
[. . .]


The United States stupidly invaded Iraq in March 2003 for the juvenile thrill of flexing our military muscles to intimidate the world. But we also made Iran, a state sponsor of terrorism, stronger by destroying its chief nemesis, Saddam Hussein. Thirteen years after our invasion, we stupidly remain in Iraq without any idea of why we are there beyond killing for the sake of killing.


That is the very definition of stupid stuff that President Obama professedly derides.

Let's stay with stupid stuff for a moment.

I have this visual image of 30,000 Iraqi troops tiptoeing through the desert in order to mount the 'sneak' attack on Mosul that Trump wants!
10 replies68 retweets106 likes

He deliberately distorts what Trump says.

I don't agree with Trump on this point (or on any that come to mind -- oh, I agree that Hillary's crooked -- that I agree with).  But his point was that for months they've been saying that the assault on Mosul would start and that this allowed leaders of the Islamic State to leave.

You can agree with his point of view that it should have been a surprise or not.

And don't applaud that.

Even if you're a Hillary Clinton supporter, don't applaud that.

Mehdi did that for Bully Boy Bush throughout BBB's occupancy of the White House.

He would go on THE DIANE REHM SHOW and ridicule opponents to the Iraq War.

So don't think Mehdi lying about someone is a good thing.

He's a suck up who chooses his targets based upon whom the establishment wants to silence.


Ben Norton (SALON) reports that Colin THE BLOT Powell has announced he will be voting for War Hawk Hillary and Powell is one of many Iraq War criminals rushing to support Hillary:

The former senior Bush administration official joins a long list of right-wing leaders who are support Hillary Clinton.
Former president George H.W. Bush, father of the leader under whom Powell served, has also said he is going to vote for Clinton.
Likewise, former vice president Dick Cheney heaped praise on Clinton in a 2011 Fox News interview. He said the then-secretary of state was “one of the more competent members of the current administration,” adding that “it would be interesting to speculate about how she might perform were she to be president.”
Cheney stopped short of endorsing Clinton and appears to have said little about her in this election. Salon sent Cheney multiple requests for comment but did not receive a reply.
Clinton also had a warm relationship with Robert Gates, a former secretary of defense in George W. Bush’s administration and later for Obama’s. Gates admiringly called Clinton a “tough lady” who shared his hawkish politics and “was someone he could do business with,” the Times reported.
Neoconservative war hawks like Robert Kagan, Max Boot and James Kirchick have similarly endorsed Clinton, applauding her foreign policy views.


As Bully Boy Bush might say, that's her base.

Why has debt ballooned? Reckless wars for oil. Tax cuts for the rich. Economic meltdown. Caused by both Dems + GOP. #InvestYourVote

How would you feel if another country occupied US and bombed your family? We need to stop creating enemies. #NoMoreWar #PeaceOffensive

Stein is running on a peace platform, yes, but also a common sense one.

Meanwhile, the US Defense Dept announced this morning:

-- Near Haditha, one strike destroyed an ISIL trench system.

-- Near Kisik, one strike engaged an ISIL tactical unit and destroyed a vehicle.