We will suffer for years because of Joe Biden's stupidity 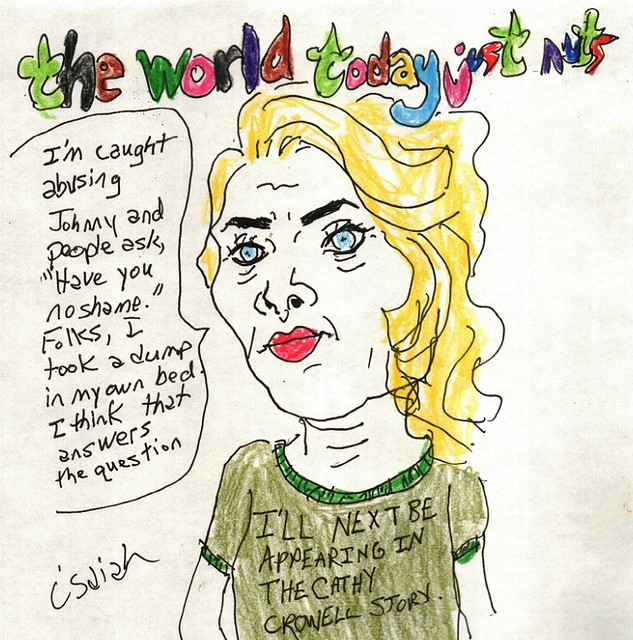 Even someone like Heard whose image is in tatters can take comfort in the fact that at least she is not Joe Biden.  CNN notes:

The Federal Reserve said Wednesday it is raising interest rates by a half-percentage point to get a handle on the worst inflation America has seen in 40 years.

It’s the first time in 22 years that the central bank has hiked rates this much. The decision was unanimous, with all 12 members of the policy-setting Federal Open Market Committee agreeing on it.

And before you say thanks Joe Biden for being so damn miserable in office, there's more.  Fox notes:

With April’s inflation numbers out next week, Fox News contributor and The King’s College executive vice president of business and economics Brian Brenberg warned 40-year high consumer prices will carry on – likely to a recession.

The thing about an increase in, say canned soup, it never goes back down.  It's not the price of gas at the pump.  Food prices go up?  They never come back down.

Thanks Joe Biden for being such an ass and such a fool that you ran for an office you were unqualified to hold.  We will be suffering for years because you are an idiot.

Wednesday, May 4, 2022.  Governments refuse to stand up for their own citizens (while giving their all to starting wars).

Around the world people are in need.  One such person is Robert Pether, a business person who is caught in nonsense between the Iraqi government and the company he works for.  Lured into Iraq over a year ago, he was promptly arrested and put behind bars.  Matthew Doran (Australia's ABC) reports:

Robert Pether, 46, has been locked up in a Baghdad prison since April last year, and an investigation by the United Nations raised concerns he had been "shown torture rooms, blindfolded, insulted and screamed at" while languishing behind bars.

Mr Pether, an engineer, was arrested alongside his Egyptian colleague Khalid Zaghloul while working on the development of the new $1 billion central bank of Iraq headquarters.

"He's been imprisoned in Iraq for over a year," she said clutching a toy rabbit.

"Please, Mr Morrison, can you help him?

"I really, really miss him."

Robert Pether, who lived with his family in Elphin, Co Roscommon, has been held in "dismal conditions" at a prison near Baghdad due to a contract dispute between his employer and the Iraqi government.

thejournal.ie
Efforts continuing to secure release of Irish resident imprisoned in Iraq for the last year
Robert Pether’s family has said that his health is “deteriorating” in prison.
2:54 AM · Apr 27, 2022

Ireland has done more to try to free the Australian native than has his own country's government.  That's only surprising if you haven't been following the persecution of Julian Assange.  The founder of WIKILEAKS is also an Australian citizen.  As US President Joe Biden continues to persecute Julian, the pathetic Australian government does nothing.  The message is clear, if you're and Australian citizens, you are on your own in this world because your cowardly government does not want to make waves to protect you.  They're too busy cowering with their tail between their legs to defend or stand up for their own citizens.  Pathetic and shameful.

Julian exposed War Crimes in Iraq and Afghanistan which is why the US government has persecuted him ever since.  Joe Biden continues the persecution.  He wants Julian to stand trial in the US for the 'crime' of journalism.  This is the same Joe Biden who sat on his fat ass in the US Senate for years after Senate investigators discovered that torture was being carried out in the gulag on Guantanamo.  His oath of office as a senator actually required that he do soething but Sleepy Joe must have been taking another nap because he did nothing.

We also need to remember what was done to Chelsea Manning -- she is the one who leaked the news of War Crimes to WIKILEAKS.  Many things were done to Chelsea to humiliate her and to destroy her while in US custody.  I'm focusing here on one thing only.

Chelsea had not transitioned at that point in her life.

How do you antagonize and humiliate anyone -- let alone a transgendered person?  You hold them in a prison where the guards see them naked all day.  The lie the US government told back then 00 which we challenged at the time (shame others didn't pick up on it) was that Chelsea was a suicide threat and so she couldn't have clothes -- she might try to strangle herself.  As we pointed out in real time, paper scrubs.  If youre afriad someone might harm themselves in your custody, you don't strip them naked and put them on display.  You utilize paper scrubs.

This is the 'caring' US government that 'respects' human rights, the government the UK is preparing to turn Julian over to.

That's Julian's wife Sella speaking on the need to stand with her husband.

The US government is really good at destroying lives in their endless wars and at ignoring the needs of the American people.  It's just not good at democracy or at human rights.

In the war torn country of Iraq, destroyed by the US government and still occupied, KURDISAN 24 notes:

UNAMI also called on “authorities to ensure their protection from intimidation and threats and to fully respect the right to freedom of expression and freedom to impart information.”

In Iraq, journalist are regularly rounded up by security forces, are regularly disappeared.  They risk a lot to try to cover the basic realities.  In the US, most journalists settle for being whores instead and just comfort those in power with puff pieces.  KURDISTAN 24 notes:

The freedom of the press in Iraq is declining, with hundreds of journalists facing "arrests, killings, and disappearance," the Iraqi Observatory for Human Rights outlined in a report released on Tuesday, World Press Freedom Day.

"The freedom of the press in Iraq is much lower than it should be in a country that raised the slogan of democracy nearly 20 years ago," the report charges, pointing out that Iraq has a constitution that guarantees "the right to express an opinion and obliges the authorities to protect it."

"Since 2003, hundreds of journalists and media professionals were killed, arrested, and even disappeared," it said. Furthermore, media headquarters have been raided in response to their coverage or editorial lines.

"From May 3, 2021, to May 2, 2022, there has been an increase in the influence of parties that have an interest in antagonizing freedom of expression and undermining the space for journalistic work in Iraq," the report noted.

Meanwhile, the political stalemate continues.  Iraq held elections October 10th.  All this time later, they are still unable to name a prime minister or president.  And don't look for diplomatic assistance from the US.  Even were that possible, the outgoing Iraq Ambassador remains hostage to Joe Biden's lame duck status.  He nominated a new ambassador to Iraq back in December.  The Senate held confirmation hearings already.  But there's still no vote.  As the political stalemate continues, Chenar Chalak (RUDAW) notes:

The Coordination Framework has requested the Kurdish political parties to come to an understanding and agree on a candidate for the presidency of Iraq, as a part of its 18-points initiative announced on Wednesday attempting to bring an end to the political deadlock that has plagued the country, a week before Muqtada al-Sadr’s political “step-back” nears its 40-day completion.

The initiative from the Iran-backed parliamentary blocs consists of nine original points, in addition to nine further points which it requests all political parties adhere to in order to end the deadlock.

Lauding the role of the President of Iraq, referring to the position as “the protector of the constitution,” the initiative stresses that the person filling the position must be characterized by efficiency and good conduct and behavior, proceeding to urge the Kurdish parties to “make efforts to reach an understanding and agree on a candidate with these qualities and within the established contexts.”

Did you realize that the Kurds were the dominant population in Iraq?  Me neither.  I also didn't realize that they controlled politics.  It's an easy out to scapegoat the Kurdis politicians.  Not accurate, not fair, but it's easy.

Let's wind down with this Tweet from Margaret Kimberley:

I pointed out that democrats could have protected abortion rights with legislation. Their pro-choice stance is a scam to keep you voting for them. You're welcome. #RoeVWade https://blackagendareport.com/democratic-party-betrayal-abortion-and-supreme-court

And she pointed that out last year.