Diet for a Small Planet

Frances Moore Lappe's Diet for a Small Planet is now in its fiftieth edition.

I enjoyed the new book.  Read over it over the weekend.  Some things have been updated for this edition.  Some updates from earlier editions are still in the book.  I think the new edition makes the argument stronger -- that we do not need meat for protein and that a lot goes into producing meat so if we are truly interested in feeding everyone we need to look at alternatives.

I'm less enthused about the recipes.  I'm sure I will grow to love them but I wish that earlier ones had been included.

I don't know if Frances knows this but Diet for a Small Planet is not a used book staple.  Those of us who buy it keep it or give it away.  I've given copies to friends repeatedly over the years.

It's not as though it's easy to find the book in previous editions and some of those recipes will be lost.

I'm trying a recipe tonight and I'll note it tomorrow.

Oh, another thing I like is that it's a soft cover volume.  I've had the paperback edition since one that had a sprial binding (I loved that the best).  So this is a little larger and it stays open a little easier -- good for when you're trying to cook and look at a new recipe.

Don't forget to read Ava and C.I.'s "Media: Don't mistake it for a film worthy of praise" and a number of us sided with Ava and C.I. on Sunday (and should have all along) by insisting that whatever was done go up then and that we not get back together later in the week.  As it was, I was so tired from all of Sunday that I didn't even post last night.

Tuesday, January 11, 2022.  The new year is young but Medea Benjamin has already spouted more stupidity than a person should have a right to.  First . . .
Hassan Ali Ahmed (AL-MONITOR) reports that Speaker of Parliament Mohammed al-Halbusi has the approval of Moqtada al-Sadr.
Huh?
How is that news?
It was already clear on Sunday.  That's when, as things got out of hand and Moqtada was being challenged and Mahmoud Daward al-Mashhadani staged his fainting spell.  Mohammed played along with it.  That was all you needed to know.
It was interesting to read the write-ups on that fainting spell.  First, they never noted how fake it was.  Second, they never noted the fake it was coming from.  Mahmoud was once a prisoner of US forces.  Much later, when he was Speaker of Parliament, he would call Iraqis who killed US troops "heroes" and he would be eased out of the Parliament because his bodyguards attacked a Shi'ite MP.
Bringing Mahmoud in to rule over Sunday's session let you know it had all been planned ahead of time.  As for Mohammed al-Halbusi, he's a made man in Anbar.  And, yes, that is what it sounds like.  Construction was very good for many criminal elements and Mohammed was just one example.  He used his influence to become governor of Anbar Province in 2017 -- this was after the sitting governor was removed (Suahaib al-Rawi) when he began dismissing officials as part of a corruption clean up.  No such concerns with Mohammed who feels he's among friends when he's elbow to elbow with the corrupt.
That's why so many were laughing last August when Mohammed accused his rival Khamis al-Khanjar of selling Sunni land off for profit.
Crooks in the Iraqi government?  Why not, they're in every other government as well.
Which brings us to War Criminal Tony Blair.  THE TIMES OF ISRAEL reports:

A petition to strip former British prime minister Tony Blair of his knighthood due to his role in the Iraq War has gained more than 1 million signatures and the backing of at least one Labour MP.

The petition, posted on Change.org a week ago, accuses Blair of causing “irreparable damage to both the constitution of the United Kingdom and to the very fabric of the nation’s society.”

Blair “was personally responsible for causing the death of countless innocent, civilian lives and servicemen in various conflicts,” the petition claims. “For this alone he should be held accountable for war crimes. Tony Blair is the least deserving person of any public honor, particularly anything awarded by Her Majesty the Queen.”

On January 1, Buckingham Palace announced that Blair had been made a Knight Companion of the Most Noble Order of the Garter, the oldest and most senior British order of chivalry. The knighthood given to Blair, who served as prime minister from 1997 to 2007, was decided by the queen and made without government advice.

Crooked Tony.
Tony Blair claimed £7,000 in expenses for a new roof on his second home, just 2 days before leaving office. 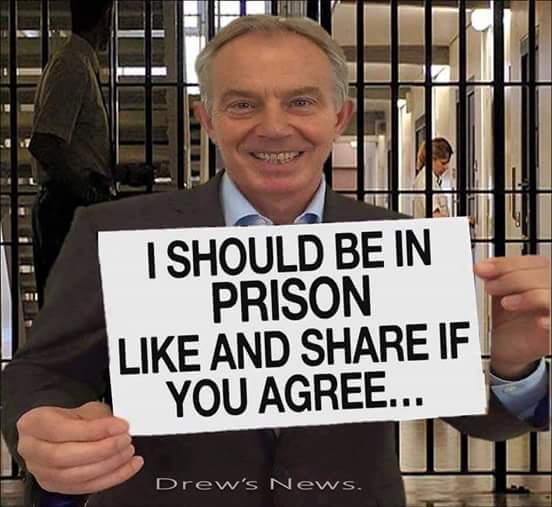 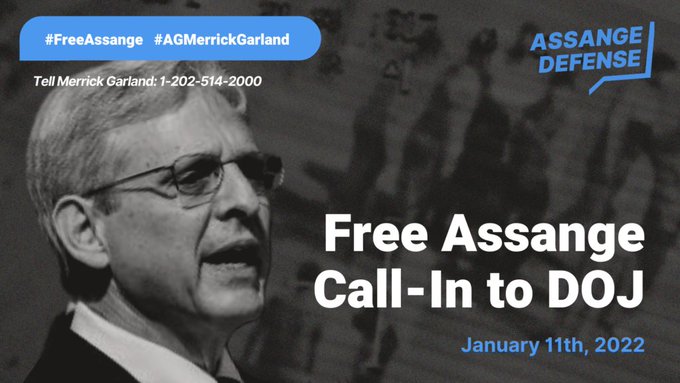 7:50 AM · Jan 11, 2022
What do you think is going to happen from that?  Merrick's going to feel pressure?  Not at all.
Why are you so damn scared to drop this where it belongs?
Joe Biden. He's the one overseeing things.  He's the one Merrick answers to directly (ultimately, Merrrick will answer to the people but that's a ways off -- they usually have to be out of office before they grasp that).  So put it on Joe's doorstep.
Let him know just how many people are watching.  He's not accomplished anything.
Can we all just be honest?  He's accomplished nothing.  If history holds, he will lose at least one House of Congress in the mid-terms.  If history holds, his first year was the year to be bold and pass bold moves.  That time is now over.
He's a useless figure.  And if you'd grasp that, you might grasp how much power a real movement to free Julian could have on Joe who has no legacy to speak of.
2021 was his best year as president.  There's no imporvement.  Not even some break through stem-cell research is going to turn 79-year-old Joe into a charasmatic and powerful leader.  It's over.
The White House staff realizes that.  The mood there is dour.
Smart people are updating their resumes and planning to bail soon because they know it's only going to get worse.  And they grasp that, at some point, news outlets are going to stop trying to prove they're 'tough' and 'independnet' by going after Kamala and finally have to go after Joe himself.
Merrick?
You're not accomplishing anything.
Joe makes the call.  If history tries to land it at Merrick's doorstep, all he has to say is he tried privately.  When you have no real power, you can't take the real blame.
Joe's the one with the power and attempts at holdin gthe US government accountable are laughable until they start being directed at the president of the United States and not an underling.
Staying with the US government, RUDAW reports:
The US Embassy in Baghdad released a statement on Monday welcoming the fifth Iraqi parliament, congratulating the newly elected officials, and expressing hope in the quick formation of a new government.

In the statement, the embassy highlighted the role and significance of the parliament, calling it an integral and inseparable component of Iraq’s democratic process and its national sovereignty.
Hoping for a quick formation?  Hmm.  October 10th elections and it's January 11th right now.  Hmmm.
In other news, PRESS TV reports:

Several roadside bomb attacks have targeted convoys carrying logistical equipment belonging to the US military south of the Iraqi capital of Baghdad and in the country’s southern province of Muthanna, amid strong public opposition to the prolonged presence of American occupation forces on Iraqi soil.

There were no immediate reports of casualties or damage.

Shortly afterward, a bomb attack targeted a logistics convoy of US forces in the town of Adwaniyah.

But remember, Jibberish spouting Joe insists that the combat mission ended for US troops.  Someone please advise the various bombs and drones of this change.
Now let's move over to the latest in news of nitwits.  Medea Benjamin apparently had to team with Nicolas J.S. Davies to write something this stupid:
The good news is that U.S. bombing of those 3 countries has significantly decreased from the over 12,000 bombs and missiles it dropped on them in 2019. In fact, since the withdrawal of U.S. occupation forces from Afghanistan in August, the U.S. military has officially conducted no air strikes there, and only dropped 13 bombs or missiles on Iraq and Syria – although this does not preclude additional unreported strikes by forces under CIA command or control.
"The good news"?? Dumb bitch, when you're talking about civilians being bombed, there's no "good news" and you look more stupid than ever when you try to pimp that the US "only dropped 13 bombs or missiles."

That Medea is what passes for a peace leader in the US goes a long, long way towards explaining why there's no real peace movement in the US.
I wonder if the victims of the bombings feel Medea's spreading "good news"?
The following sites updated:
Posted by Trina at 8:00 PM