Awful headache.  Migraine.  It feels like I need to take the sharp end of a can opener to each temple just to relieve the pressure on either side.  So this will be brief.

Jeff Schuhrke (In These Times) notes:

Coming just three days before Christmas to ensure maximum impact, the action caps a year of intense organizing and protest by Amazon warehouse workers who have been on the frontlines of both the Covid-19 pandemic and extreme weather events.

Organized by the labor network Amazonians United, the walkouts occurred during the morning shifts at the company’s DIL3 facility in Chicago’s Gage Park neighborhood and at the DLN2 warehouse in the nearby town of Cicero.

Miin told In These Times that at his warehouse in Gage Park, 65 out of an estimated 100 workers signed onto a petition demanding a $3‑per-hour raise and safe staffing. The petition was delivered to management a month ago, but the workers never received a response. ​“They’re not taking us seriously, so we’re walking out,” he said.

At the DLN2 delivery station in Cicero, Miin explained that management explicitly promised double-pay for those working on Thanksgiving, but only gave one-and-a-half time pay. He also said that new hires at the facility did not receive a promised $1,000-dollar sign-on bonus.

2021 has been about workers standing up for themselves.

I hope these strikes only increase in 2022.

Tuesday, December 28, 2021.  Reults are certified in IRaq even if the western press can't get the results right or cover the Baghdad protest.

Desmond Tutu has passed away.

The world leader lived his life making a difference.

In February 2004, 11 months after the Iraq War started, CNN reported:

Saying the United States and Britain must regain international credibility, Archbishop Desmond Tutu has urged George Bush and Tony Blair to admit they made a mistake in launching an "immoral war" in Iraq.

The world is a less safe place than before, the church leader said.

"How wonderful if politicians could bring themselves to admit they are only fallible human creatures, and not God, and thus by definition can make mistakes," Tutu said in a speech in London on Monday.

"Weak and insecure people hardly ever say, 'Sorry.' It is large-hearted and courageous people who are not diminished by saying, 'I made a mistake.'

President Bush and Mr Blair would recover considerable credibility and respect if they were able to say, 'Yes, we made a mistake,'" he said.

The nobel laureate criticized the leaders for justifying the war by saying it was necessary to oust Saddam Hussein, rhetoric that has intensified since no weapons of mass destruction had been found.

South African Archbishop Desmond Tutu said Sunday that Tony Blair and George W. Bush should be “made to answer” at the International Criminal Court for their actions around the Iraq war.

Writing in an op-ed published by The Observer newspaper, the Nobel laureate accused the former leaders of the United Kingdom and the United States of fabricating a motive to invade Iraq, namely that it possessed weapons of mass destruction, and said that they had acted like “playground bullies.”

“The immorality of the United States and Great Britain’s decision to invade Iraq in 2003, premised on the lie that Iraq possessed weapons of mass destruction, has destabilised and polarised the world to a greater extent than any other conflict in history,” wrote Tutu. “In a consistent world, those responsible for this suffering and loss of life should be treading the same path as some of their African and Asian peers who have been made to answer for their actions in the Hague.”

I met Desmond Tutu many times over the years.  Once, in Los Angeles, I remember U2 being present.

Lead singer and celebrity Bono, of course, died years ago.  The soulless husk that wanders around now is an embarrassment and a poser.  Why did their last album, SONGS OF EXPERIENCE, flopped so badly.  Of THE BILLBOARD 200 album chart in ten weeks, music listners appalled that, without asking, they'd been 'gifted' with digital copies of the album.  The band's never recovered all these years later.

Desmond lived his life in truth, Bono lived one lie after another.  By ACHTUNG BABY, he was openly cheating on his wife and yet people looked the other way for Saint Bono.  (The gal for the night was selected among the women who crashed that days sound check.)  This looking away only encouraged him and he'd refuse to speak out against the Iraq War.  The poser who pretended to be about people and against war wouldn't speak out against the Iraq War and, to this day, has not.

That's becuase he was cock-knocking buddies with Bully Boy Bush.

That's his buddy, that's his roll dog, a War Criminal.

And no one had any use for Bono anymore.  His santimonous stances were not only prickly, they were exposed as hollow.

By the time he left his 'beloved' Ireland to live in the US -- to avoid paying taxes in his own country, the world knew the real Bono.

To this day, Bono plants open mouthed kisses on Bully Boy Bush.  May he end up Buly's Eva Braun when the two both end up in hell together.

Desmond Tutu lived a life that mattered.  A lot of people used him as a prop and for photo ops to improve their own images but time will out and hucksters like Bono always get exposed.

Celine Alkhaldi and Aqeel Najim (CNN) claim to be reporting when they write:

raq's Supreme Court has ratified the results of October's parliamentary election, dealing a blow to Iran-backed factions who have staged protests against the outcome of the vote.

The results pave the way for Moqtada al-Sadr -- a firebrand cleric opposed to both Iranian and US influence in Iraq -- to decide the fate of the current prime minister, Mostafa al-Kadhimi, who is backed by the United States.
Sadr's party, the Sadrist Movement, was the election's biggest victor, winning 73 of the country's 329 seats. Iraq's Tehran-backed parliamentary bloc lost more than half of their seats -- winning just 17, down from 48.

LIE!  Stupid idots or lying whores?  We'll assume they're ignorant but feel free to drop a rwenty ont he dresser for each of them.

The KDP, the party of the Barzani family in Kurdistan is a political party.  Moqtada's bloc or alliance is not a party.

Moqtada al-Sadr's party did not get the most.  His political alliance did.  If you're too stupid to grasp the difference, maybe you shouldn't be reporting on Iraq -- or anything else.

CNN needs to correct the lying.  But, even more important, stop the 'kingmaker' nonsense.  The election was months ago.  And in all that time, Moqtada's not been able to build a coalition -- in fact, former prime minister and forever thug Nouri al-Maliki has done a much better job than Moqtada of trying to reach out to other blocs and parties.

Nuri al-Maliki is in Erbil and given a warm reception, despite accusing Kurdish leaders of harbouring extremists in the past, cutting off the region’s budget when he was a PM, and to add a bit of cream to this pie, he said Erbil is a base for Baathists and terrorists. #Kurdistan
3:45 AM · Dec 22, 2021

A delegation from the "Coordination Shiite framework" arrives to Erbil. The delegation headed by Nuri al-Maliki. There is now a meeting between Maliki and Masoud Barzani. 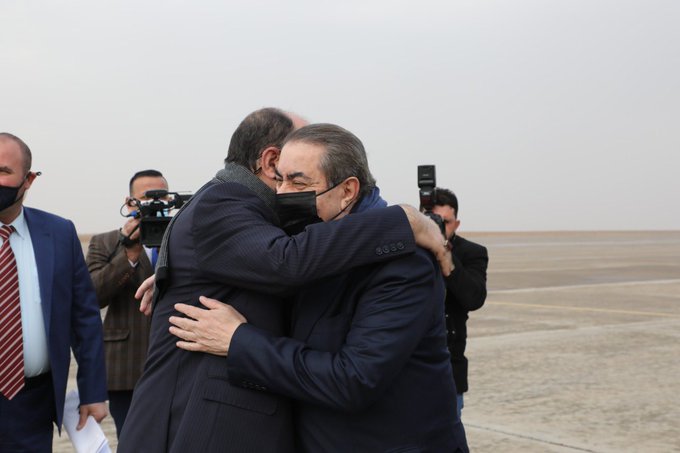 We could offer many more photos of Nouri reaching out but we can't of Moqtada.  Fat boy apparently is too busy eating to maintain his plush figure.  Even those in his bloc are ticked off by Moqtada and his lazy ass.

But, hey, US tax dollars went to Moqtada in August (to get him to proclaim he would be particiapting in the elections) so NYT and other US outlets are comfortable lying.

Many on Arabic social media are outraged.  And protests took place in Baghdad, protests the western media largely ignored.  PRENSA LATINA did report on the protests:

The demonstrations coincided with appeals filed by the head of the Al-Fatah (Conquest) alliance, Hadi Al-Amiri, one of the coalitions that lost more than 30 seats for the next legislature.

Most of the streets in Baghdad were blocked by burning tires and other objects, while troops were deployed to keep the flow of vehicles.

Those opposed to the electoral results sought a correction to the decisions of the Electoral Commission, whom they accuse of manipulating the votes.