That's Krystal and Saagar with Breaking Points noting the strikes taking place across the country.

On Sunday, workers at the agricultural and construction equipment maker Deere & Co. voted by 90 percent to reject a tentative agreement backed by the United Auto Workers (UAW).

The vote was a stunning rebuke to the UAW, which tried to rush through a six-year concessions contract for 10,100 workers without giving them sufficient time to study it. At so-called informational meetings Sunday, workers angrily confronted union officials trying to sell the deal. “Deere and the UAW tried to pull a fast one, but the rank and file fought back,” a worker at the Dubuque, Iowa plant told the WSWS.

Confronting an incipient revolt, the UAW announced it was setting a strike deadline for 11:59 p.m. Wednesday night. Behind the scenes, however, the UAW executives are doing everything they can to block a strike or isolate and defeat a walkout if it is forced to call one.

One can’t spend the entire time saying, “#Iraq’s government are incompetent, they’re thieves, they kill with impunity,” and then turn around and say, “I believe that the elections which they administer are fair.”
6:36 AM · Oct 12, 2021

Shia Muslim cleric Moqtada al-Sadr's party was the biggest winner in an Iraqi election on Monday, increasing the number of seats he holds in parliament, according to initial results, officials and a spokesperson for the Sadrist Movement.

Former prime minister Nouri al-Maliki looked set to have the next largest win among Shia parties, initial results showed.
Iraq's Shia groups have dominated governments and government formation since the US-led invasion of 2003 that toppled Sunni dictator Saddam Hussein and catapulted the Shia majority and the Kurds to power.

Don't you love the garbage that passes for journalism?

The election was an embarrassment.  It was a failure in every way.  So the press tries to distract.  The low turnout was hard to ignore.  So instead we got a 'major' arrest that was nothing -- even if the claims were true -- that tried to crowd out the news of the low turnout  -- news that was still in the news cycle.  Now along comes REUTERS to tell us the possible results.  Still need to be checked.  They transcribe what they were told beautifully but I thought REUTERS was a news service, right?  Not a transcription service.

For over two weeks, we have noted that Dilan Sirwan (RUDAW) has reported: "Iraq’s electoral commission aims to announce the results of the upcoming parliamentary elections on October 10 within 24 hours, they announced on Thursday following a voting simulation."

The elections were Sunday and today is . . . Tuesday.  And they didn't announce a winner, they announced "initial results" late Monday.

The election was a failure in every way.  And with record low turnout, they still weren't able to announce results "within 24 hours."

A failure and REUTERS can't even tell you that because they're too busy checking their stenography to actually report.

If 'initial' results hold (they don't increase and they do not lower), Moqtada al-Sadr's bloc has 73 seats in the new Parliament.  That's an increase of 19 seats from the previous Parliament.  (Moqtada himself does not have a seat in the Parliament, he did not run for office.)  That's if the results hold.  EL PAIS notes that the results are already being disputed:

Kataeb Hezbollah, one of the main pro-Iranian militias, has rejected the election results. In a statement, its leader, Abu Ali al Askari, urges the Popular Mobilization Forces (FMP, the umbrella that groups all the militias) to be ready to defend their “sacred entity”. He also asks the political parties to solve “the stolen votes.” His words would be a tantrum if they did not come from a powerful armed group with a long history of intimidation and attacks, which the United States and other countries consider a terrorist organization.

The leader of Iraq's Fatah (Conquest) Alliance political coalition has dismissed the preliminary results of the of the country’s recent parliamentary elections, describing them as “fabricated.”

“We will not accept these fabricated results, whatever the cost,” the Arabic-language al-Sumaria television network quoted Hadi al-Amiri,  the secretary general of the Badr Organization, a political party close to Hashd al-Sha’abi, as saying on Tuesday.

He added, “We will defend the votes cast for our candidates and voters with full force.”

Separately, the Coordinating Committee of Shia Parties in Iraq rejected the results of the national elections, and raised strong objection over what it described as the High Electoral Commission’s failure to honor its obligations.

The committee is comprised of Fatah Alliance, the State of Law Alliance, Asa'ib Ahl al-Haq political party, Kata'ib Hezbollah as well as other Shia factions.

Hadi al-Amiri, one of #Iraq's most powerful pro-Iranian figures, has rejected the results of Iraq’s elections as “fabricated.”

english.alarabiya.net
Iraqi pro-Iranian politician Amiri rejects election results as ‘fabricated’  | Al Arabiya English
Hadi al-Amiri, one of the most powerful pro-Iranian figures in Iraq, has rejected the results of
6:45 AM · Oct 12, 2021

Leading Shia parties in Iraq have announced their collective rejection of the results in Sunday's parliamentary elections, after the initial evidence appeared to suggest a collapse in their vote share.

The Fatah alliance, which is composed of supporters of the country's al-Hashd al-Shaabi militia movement, in particular denounced the results as "fabricated" while one armed militia faction appeared to threaten violent action in response.

According to initial results released by the Iraqi High Electoral Commission (IHEC), the Sairoun movement led by cleric Muqtada al-Sadr came out ahead with 73 of the parliament's 329 seats, in what had been an election with a record low turnout of 41 percent.

In a statement on Tuesday, Hadi al-Ameri, leader of Fatah, called for a joint response against the election results from other Shia political factions.

"We do not accept these fabricated results, whatever the cost, and we will defend the votes of our candidates and voters with full force," said his office.

Sallon Helene (LE MONDE) notes that Nouri's State of Law, by preliminary results, has won 37 seats while, in the KRG, the Barzani family's KDP is the victor.  This means the PUK continues it's slide into irrelevance.  Possibly all these years of Jalal Talabani's sons flaunting their wealth and homes overseas (including in the US) -- mansions, really, returning to Iraq whenever they wanted to condemn the Kurdish people for attempting to envision an independent Kurdistan, hasn't paid off?  Or maybe the Kurdistan is still repulsed by the Talabanis and their PUK for lying to them and the entire world after Jalal had his infamous stroke and held onto the office of president despite the fact that he was incapacitated -- a detail the Talabanis got around to a degree by posing his non-moving body for staged photographs?
A winner per preliminary counts is former Speaker of Parliament is Mohammed al-Halboussi who, Helene notes, faced a serious challenge from Khamis al-Khanjar.
Shelly Kittleson Tweets:
Though much focus has been #Sadr in #Iraq's elections, parliamentary speaker #Halbusi's (photographed here with me during 1 of 2 interviews I did with him in 2018) party has seen the largest rise in seats. I recently wrote on Sunni parties for
@AlMonitor
: https://al-monitor.com/originals/2021/09/iraqs-sunni-parties-compete-votes-crucial-election 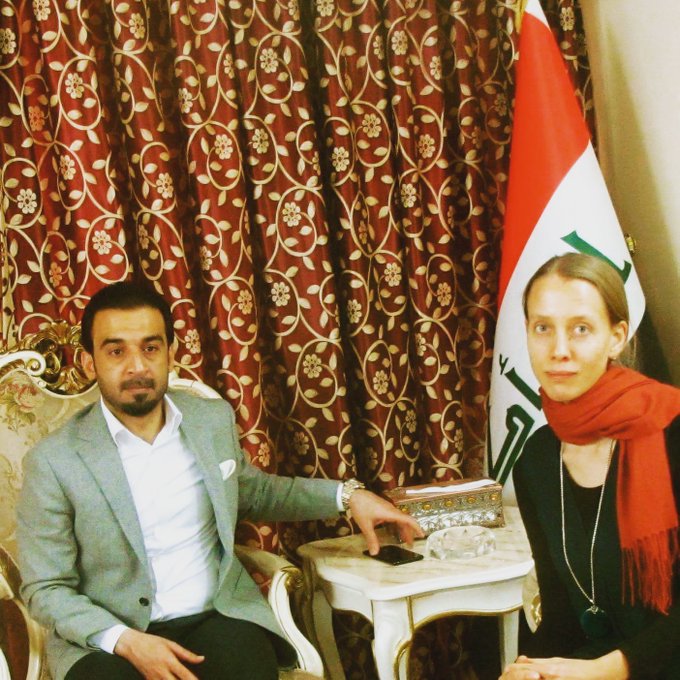 6:31 AM · Oct 12, 2021
In other news, Ray Odierno has passed away.  US Secretary of Defense Lloyd J. Austin III issued the following over the weekend:

Charlene and I were deeply saddened to learn of the passing of General (Ret.) Ray Odierno.

Ray was a teammate, a confidant and a powerful example to me. Mostly, he was my friend. And I will miss him dearly.

My thoughts — like those of everyone who knew him — are squarely with Linda and their children and grandchildren. We know we cannot assuage their grief, but we hope Ray's strong legacy of leadership brings them some measure of comfort.

Throughout nearly four decades in uniform, Ray Odierno served his country with great dignity and courage.  He led bravely in peace and in war.  And he mentored an entire generation of future leaders.

Ray was known for his loyalty — to mission and to his people. He cared deeply about the troops who knew him as "General O," and he and Linda looked after the families of those troops as if they were their own. From training and equipment to mental health and education, the Odiernos remained tireless advocates for the health and welfare of those who serve.

As our 38th Chief of Staff of the Army, Ray also worked to forge what he called an "Army of the future"— a force that was agile, innovative, adaptable, and led by leaders of character and commitment.

The United States Army, indeed our nation, is stronger for his dedication, professionalism, and leadership.  I know that I am a better person for having had his friendship.

On behalf of the men and women of the Department of Defense, I extend my deepest condolences to Linda and the entire Odierno family.

Odierno served in Iraq from 2008 to 2010.  He was the top US commander in Iraq (Lloyd Austin served under him).  He restored morale among US troops and also had a good eye for seeing events others didn't notice.  Prior to the 2010 elections, he had stated that the US needed to plan for what might happen in Nouri lost the election and refused to step down as prime minister.  Nouri did lose the March 2010 elections.  And he did refuse to step down.  For over eight months, it was a political stalemate.  Had a plan been formed when Ray raised the issue, things would have been a great deal different.
He e-mailed this site frequently.  When in Iraq, it was often via his assistant who would open with "The general wishes to correct . . ."  He continued to e-mail after he left Iraq.  I never replied while he was in Iraq.  We took what he said and looked at it and did a correction or clarification if one was required.  After he was out of Iraq, we had many lively exchanges and I was impressed by the fact that the Iraqi people were not forgotten by him.  We disagreed on many things but it was clear in his writing that he cared about the Iraqi people.
If you're new to the site, I avoid private conversations with people who are covered here.  That's reporters, that's whomever.  So I did not reply when Ray Odierno was in Iraq.
Of the US commanders who wrote over the years, he was always clear in what bothered him if something bothered him -- and clear in the one or two times he felt we got something right that others were missing.  It wasn't a vague e-mail that quickly became a testimony to themselves.  Think about the one who got into big trouble with his e-mails -- and that was with his biographer -- and you'll know which blowhard I'm referring to.
When he communicated, his concerns were those serving under him and the Iraqi people.  If he was prone to vanity, he never demonstrated it in e-mails.  Again, we disagreed on many things, but he always came off as someone you'd like to know and spend an afternoon talking with.
The following sites updated:
Posted by Trina at 9:00 PM