It's getting ready to pop

I am so sick of THE NEW YORK TIMES and its lies.  The paper is a menace. It has been that for many, many years -- a point the late Gore Vidal never tired of making.  Patrick Martin (WSWS) notes the latest lies from the paper of a very bad record:

The American intelligence agencies are at it again, instigating anti-Russian propaganda in the US media with reckless and entirely unsubstantiated claims that Moscow is intervening in the 2020 presidential election. As in previous such campaigns, going back to the 2016 elections, the leading role in the McCarthyite chorus is played by the New York Times.

A front-page article in Wednesday’s print edition of the Times carries the headline, “Facebook and Twitter Warn of Russian Meddling.” The article which follows makes it clear that the source of these allegations is not the two social media giants, but rather the FBI, which was itself acting on behalf of the intelligence apparatus as a whole. The Times adds, “Two people familiar with the matter said the influence operation was first detected by American intelligence agencies, including the National Security Agency.”

The article is written in the heavy-handed style typical of these slightly revised handouts from the CIA: ominous assertion is piled upon ominous assertion, without any evidence or even attribution. Thus, “Some American officials are worried about a broad effort by Russian intelligence to use fringe websites, spread conspiracy theories and sow division in the United States.” And again, “Russian intelligence agencies have used allies and operatives to place articles, including disinformation, into various fringe websites.”

As long as the paper can demonize any critique of neo-liberalism, the people in the US can be suppressed.  But, remember, I know about cooking.  And I know what happens when steam builds inside a covered pot.  It can only stay inside for so long before the boiling water is going to pop that lid off.  There's a reason that lids for pressure cookers come with a locking device.   Or as Stevie Wonder sings in

So we're going to have to talk the hair cut.  We avoided it here.  I didn't avoid it offline, we're all laughing at how cheap Nancy Pelosi is.  In the neighborhood, she has a reputation for watering down the drinks at her own gatherings -- not because she's afraid someone will be drunk and impaired on the road home but because she's so damn cheap.

Until she opened her mouth yesterday, that's all it was.  A laugh among those of us who know Nancy about how cheap she is.  Her whole episode could have been avoided if she'd offered to pay a little bit of money and the hairdresser would have come to her.  I don't go to some shop the day of an awards ceremony and get my hair done.  I pay the money and they come to me.  I keep waiting for Jon Peters to do a guest column on this for THE HOLLYWOOD REPORTER -- about how even in the 70s, during the non-pandemic -- hairdressers would go to client's home for an additional fee.

How cheap is Nancy?  The joke currently is that she's so cheap she's planning on being buried with her penny jar.

And none of this would be mentioned here but she had to open her mouth and make it worse.

If you're late to the story, see:

And a quick recap, Nancy can't deliver a needed stimulus package -- one that should have been in place before August 1st when benefits were slashed -- but she can make time for a hair cut.

Again, she could have avoided this if she didn't, as one friend put it, use SuperCuts.  She went in to a salon that was closed.  She went inside despite the fact that our mayor has said no to that.  She could have visited and had her hair done on the outside.  But she wanted to be inside, violation number one.  Violation number two, she's not wearing a mask.

Had that been it, we wouldn't be talking about it today.  I would have worn a mask -- diabetes, back on chemo, and other factors make me a risk.  But if she's not going to wear one, that's on her.

She has said that she didn't know the law.  Any judge would reply, "Ignorance of the law is no excuse."  She has said she was set up?  How?  She got caught.  No one forced her to do what she did.  She made the decisions to do what she did and she's responsible for her actions.  Only she refuses to take responsibility or accountability.

Via CNN, here's her offending and laughable statement:

No, she does not take responsibility.  As many have already noted (many in the area), we all know what the rules are regarding haircuts.  This is not new, this did not pop up last week.

Nancy is in the wrong and she has no excuse.  I honestly thought that when she spoke on the manner, she'd say, "I made a mistake and I'm sorry about that.  I've certainly learned from this humiliating moment and it's might hope that others will be able to learn from it much easier than I have."

I would've accepted that statement.  I wouldn't have applauded it because it doesn't merit applause -- it's the least, the very least, we should expect from a public servant.

This is where we are now.  Adults think they are not responsible for their own actions and that they can blame others for what they do wrong.

Joe Biden, 18 years after his vote for the war, still can't take responsibility.

It's not his fault, he insists, the mistake he made was taking Bully Boy Bush's word.

No, that was foolish.  The mistake you made was voting for the Iraq War to begin with.  Saddam didn't have to disarm because he had no WMD.

We have let Joe and so many others get away with that.  We've looked the other way and pretended that it was okay for them to blame others for their own actions.

It started with an indefensible vote and now it's made its way down to a hair cut.

These things do not happen in isolation.

Nancy will not take responsibility for her actions.

She had attacked others for not wearing a mask.  She is a hypocrite.  She is also an adult -- and then some, she's 80-years-old.  And yet she refuses to take accountability.

We all make mistakes -- every one of us.  That certainly includes me.

If I know I've made mistakes (I probably make many that aren't even brought to my attention), I'll say so.  I'll say so and I'll take accountability and I'll move on.

Admit your mistake, try the best you can to learn from it, and get the focus back on what matters.

That is reflected among the political class with regards to Iraq.

And now, because they've gotten away with it on such a huge issue, Nancy wants to deploy the same tactics on a hair cut.

The event itself, my opinion, was minor.  What made it major and why we have to discuss it here?  Because she refuses to take accountability.

I don't give a damn if it was a 'set-up' or not.  If they laid a trap out for her?  Well she took the actions that made her the focus that she is now.

It's on her and she needs to take accountability.

Shame on anyone who tries to rescue her on this.

You wouldn't let your child get away with this nonsense of avoiding accountability, you damn sure shouldn't let a professional politician -- one who's been in office for far too many years.

Emmanuel Macron is another hideous person holding political office.  A neoliberal who cares nothing about the people he supposedly represents.  The protests and the attacks on the protesters in France have been one of the biggest stories the US press has ignored in the last 12 months.  Macron is a western neoliberal with many friends -- not just Barack.

The French leader is the first western head of state to travel to the country since the new Iraqi government took office four months ago.

He said the nuclear project would be under the supervision of the International Atomic Energy Agency and would create jobs.

There is so much wrong and appalling with that.  First off, the Iraq War was started on lies.  One of the lies was, per Bully Boy Bush, 'we have recently learned that Saddam sought yellow cake uranium from Africa.'  Well if Macron gets his way, the next Saddam the US creates will have access to basic materials in Iraq and won't have to seek it from outside.

Second, nuclear energy is not safe.  It does not become safe.  There is always the chance that an accident can happen or, for that matter, a terrorist attack which turns a nuclear plant into a nuclear bomb.  We don't need more nuclear facilities.  (Yes, I know some alleged 'greens' back nuclear energy -- well there's always at least one whore in every group.)

Third the waste has to be disposed of.  Are we going to send it into space?  Are you going to let your neighborhood be a dumping ground?  Where's it going to go?

Macron works for the nuclear industry -- and anyone else willing to pay him off.  He does not work for the people of France and how dare he go to Iraq, a country that is already suffering, and try to pimp nuclear energy.  Shame on him.  I didn't think he could get anymore disgusting but I was wrong.

In other news, Caleb Weiss and Joe Truzman (LONG WAR JOURNAL) report on talk of a new group in Iraq resorting to violence:

Guardians of the Blood, a purported new militant group claiming to be a part of the so-called Islamic Resistance in Iraq recently published a statement and video claiming responsibility for two Aug. 24 attacks allegedly against a ‘CIA security convoy’ and an ‘American convoy.’

“The heroic mujahideen on the evening of Monday 08/24/2020 unleashed their anger and fire for their revenge on an American military convoy retreating from Camp Taji towards Ain al-Assad base,” Guardians of the Blood said in the statement.

The video, posted on Aug. 30, showed a convoy of large trucks traveling on a busy road. After a few moments, an explosion occurred beside one of the vehicles. The scene then repeated itself before ending.

Additionally, the group said its men were responsible for targeting a “vehicle belonging to American intelligence” between Erbil and Mosul.

#BREAKING Scoop:
@USArmy
Ranger Sgt. Maj. Thomas Payne of
@USASOCNews
will receive the Medal of Honor for a 2015 Iraq raid that rescued 70 prisoners set to be executed by ISIS. President
@realDonaldTrump
will present the award to Payne on 9/11. https://apnews.com/0fd2ac443f7efa26ff99484d1d3d28ca 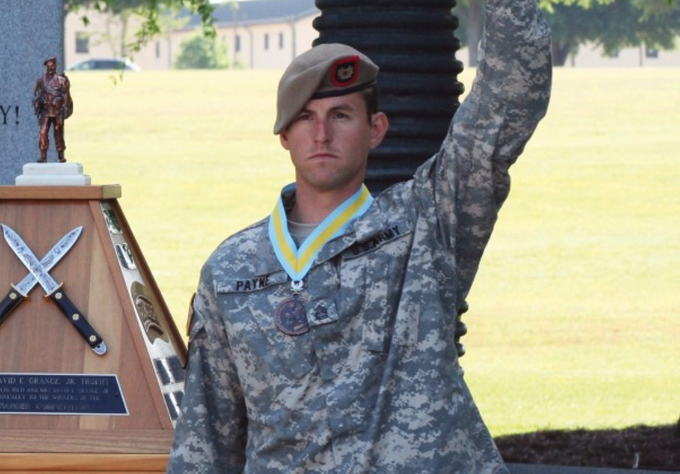 You can find LaPorta's report here.

On September 7, 2020, Julian Assange will leave his cell in Belmarsh Prison in London and attend a hearing that will determine his fate. After a long period of isolation, he was finally able to meet his partner-Stella Moris-and see their two sons-Gabriel (age three) and Max (age one)-last week. After the visit, Moris said that he looked to be in "a lot of pain."

The hearing that Assange will face has nothing to do with the reasons for his arrest from the embassy of Ecuador in London on April 11, 2019. He was arrested that day for his failure to surrender in 2012 to the British authorities, who would have extradited him to Sweden; in Sweden, at that time, there were accusations of sexual offenses against Assange that were dropped in November 2019. Indeed, after the Swedish authorities decided not to pursue Assange, he should have been released by the UK government. But he was not.