Tom Feeley runs Information Clearing House and this is his latest post:

What happens when you point out that both Democrats and Republicans are corrupt and unworthy of a vote for dog catcher not to mention president of a nation living on the blood of smaller nations?  Your financial support will drop by at least 50%

Everybody wants an independent media until it disagrees with the propaganda they have consumed over a lifetime of work and worries that has stolen their ability and desire to find the facts and act on principles rather than react like pavlovian dogs in what we have been conditioned to see as a democratic nation bringing capitalism to the starving masses.

How will this effect our efforts to continue to produce news and information that is not available in mainstream media. It won't!

I would rather walk alone than with a crowd of ill-informed sheep heading for cliff.

If you value the service provided by ICH

If you've got anything to toss in, please consider doing so.  I don't note fundraising.  Most of the people are grifters in my opinion.  Tom Feeley works to get at the truth and doesn't try to be part of an echo chamber.  That is a rare outlet in these days of talking points.

Wednesday, August 26, 2020.  Human Rights Watch calls out the targeting of Iraqi activists, Turkey bombs to death two Iraqi civilians and we take a look at the RNC and at a very xenophobic response to one speech.

We are noting the speech because there are things I do not tolerate.  Those things would include attacking someone because they have an accent.

Malania's English is fine, possibly perfect.  She has subject-verb down, for example. This is not her native tongue.  So great job learning English -- one of many languages that she speaks.

If she didn't speak English well, it would be understandable and nothing to mock, but she speaks English very well.

I've not dealt with Malania here and I've only really noted her in a piece Ava and I did in 2016 about a comedy show -- one we had been looking forward to -- thought the way to represent Malania Trump was to mock her accent.  This was done by a woman of color, a woman who herself had been mocked, a woman we know.  And we were grossly disappointed in that woman.

I don't like Bette, I never have.  I will give her credit when she does something right (she was excellent in season two of THE CANDIDATE, for example) but she's always been too rough and too much of a liar.  I have always spoken out for LGBTQ so it amazed me, for example, when Bette's career was resurrected by DISNEY, Bette pretended not to know any gay people.  She didn't know what went on in those baths she was performing in, for example.  There's a VANITY FAIR cover story of Bette that resulted in everyone laughing at her and hastening the end of her film career as a leading lady.  It was so many lies.

Bette's hard and she's rough and she's street and she's tacky.  And she demonstrated it last night with her Tweet.  She should be ashamed of herself.

The United States is a nation of many immigrants.  Bette spat on every one last night.  What Malania had to say didn't matter to Bette.  She just wanted to mock Malania.

Bette looks hard, tough and mean-spirited.  It's a look she's known for in the industry.

There was no need for it.  Elaine noted Jonathan Turley on two adults terrorizing a small child because he had a MAGA hat.

Where is Joe Biden?

These are his supporters.

Joe and his campaign are at war.  I was asked about that hat incident.  I said get Joe in front of the camera, have him speak to the fact that it was wrong, have him say it's wonderful when any child in America knows who the president is and that we can support who we want in this country.  None of that would have been hard for him or out of character for him.  They attempted to talk him into doing it.  At one point, he was going to and then he decided no, he wouldn't.  It's a shame.  It would have made him seem a lot more caring.  Americans would have applauded it because, outside of the Bette Midlers, who's going to be so low as to support adults terrorizing a child.  (I hope both women are sent to prison, that's what should happen.  They are old enough to know better and they have no excuse for what they did.)

Joe claims he would restore the tone if he were president.  Taking on that incident, calling it out, would go a long way towards backing up that claim.  He probably won't call out Bette Midler's nonsense either.

What she did was hideous.  Not criminal, but it was hideous.  She made a lot of people question themselves -- "Do people think that about me when I speak?"

There is nothing wrong with an accent.

And anyone that has come to the US speaking another language and has learned English needs to be applauded because they learned a foreign language.  Many born in the US know only one language.

Barry Grey (WSWS) calls Malania out with the following:

In an overt appeal to racism, his wife declared, “They’re not satisfied with spreading the violence and chaos into our communities, they want to abolish the suburbs altogether, by ending single-family home zoning. This forced rezoning would bring crime, lawlessness and low-quality apartments into now thriving suburban neighborhoods… So, make no mistake, no matter where you live, your family will not be safe in the radical Democrats’ America.”

Whether you agree with his analysis or not, please note that Barry took on the speech itself, he did not attack an immigrant for having an accent.

What Bette did was vile.

No immigrant deserved that.  It's amazing the xenophobia and racism that Bette and so many others have gotten away with.

I hope I'm making it clear how offensive that was.  In case I'm not, this is from Ava and my "TV: MAYA & MARTY" from June of 2016 and we're referring to Lorne Michaels in the first sentence below:

Melania Trump, for those who do not know, is the latest woman unfortunate enough to be married to Donald Trump.

For some reason, she was mocked by Maya Rudolph in a skit whose 'humor' revolved around the fact that Melania has an accent because she was born in Slovenia.

Mocking someone because of their accent?

Turning them into "the other"?

It's amazing how often, on the left, we drop our beliefs if we think it will help us.  It's why so many will quickly traffic in racism (hello, David Brock) or sexism (Keith Olbermann, you are never forgotten) to attempt a takedown 'from the left.'

It was a disgusting moment.

It was also a puzzling one.

If you needed to do political -- and we honestly do not believe a summer variety show needs to -- skit, last week it would have made more sense to do a skit about Hillary Clinton's e-mails since all of her public statements were rebuked by the report from the State Department's Inspector General.

So a skit on that would have at least passed for timely.

That would be the same McKinnon whose been getting laughs this year and last on SATURDAY NIGHT LIVE for her impersonation of candidate Hillary Clinton.

She just participated in a tasteless skit making fun of the fact that a foreign-born person had an accent.


It was offensive and it wasn't funny -- not even in a so-crudely-offensive-you-laugh-in-shock manner.

Four years later and we're still putting up with this nonsense?

Better days are coming but not fast enough.  As Cass sang, "There's a new world coming."

May we all live to see that new world.

Although Turkey’s military incursions targeting Kurds in Iraq are not new, Baghdad’s response to its latest round of hostilities is unprecedented. Iraq’s newly instated prime minister, Kadhimi, has pledged to reexamine some of Baghdad’s regional relationships. Kadhimi’s political platform centers on the prioritization of Iraq’s sovereignty and condemnation of foreign intervention in the country. He has consistently denounced Iran’s interference in Iraq’s political sphere, as well as the scope of US military presence on the ground.

Although Kadhimi views Turkey’s military presence in Northern Iraq as a threat to its sovereignty, he will likely stop at diplomatic measures to counter Ankara’s violations. Kadhimi is currently grappling with escalating US-Iranian conflict on Iraqi soil, economic collapse, the spread of coronavirus and rebuilding his citizens trust in government. The prime minister cannot afford to completely cut off ties or to wage military action against its neighbor amid this uncertainty. Ankara’s surge in military action in the Iraq’s northern districts is likely intended to test the prime minister’s resolve in countering foreign presence. In fact, Turkey’s foreign ministry announced it would sustain its cross-border operations against Kurds in northern Iraq as long as Baghdad continues to “overlook the militants’ presence in the region.”

#Basra gunmen killed 2 activists, wounded 4- situation in Iraq has reached point where armed groups can shoot members of civ society in streets with impunity. Not sure whether federal gov is even able to rein in violence or ensure justice for victims https://hrw.org/news/2020/08/26/iraq-basra-political-group-targeted 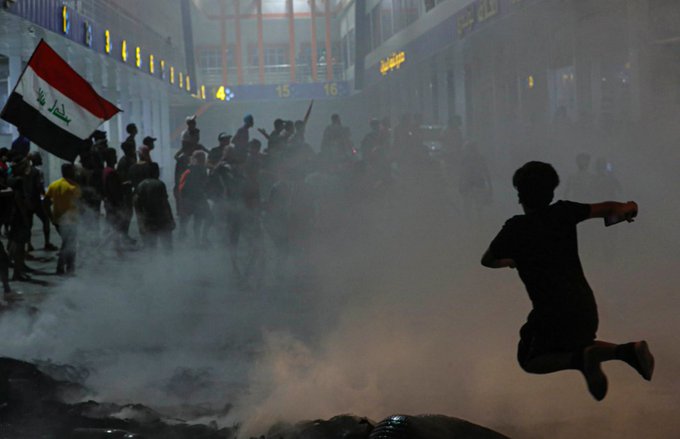 Among the activists killed was Dr. Reham Yacoub.

Anas Bakhash devotes an episode of his program AB TALKS to Iraqi women (there is closed captioning in English).