There is no excuse

Still waiting on full and final results from Iowa.  They still can't get it together.


The day-long delay in the reporting of voting results from Monday night’s Iowa Democratic caucuses is an unprecedented event, even by the sordid standards of American capitalist politics.
For some 20 hours after an estimated 175,000 people had participated in caucus meetings, the Iowa Democratic Party refused to report a single vote, claiming technical difficulties in the app used to report the precinct caucus totals to party headquarters.
When partial vote totals were finally released at 4 p.m. Tuesday, local time in Des Moines, it was for only 62 percent of the nearly 1,800 precinct caucuses. State party chairman Troy Price refused to explain how the 62 percent had been selected, or what distinguished these from the 38 percent not yet reported. He brushed aside repeated questions about when a final count would be ready.
Whatever the specific intentions of the Iowa state party leaders, every action they have taken in the caucus crisis has been to the detriment of Vermont Senator Bernie Sanders and to the benefit of former South Bend mayor Pete Buttigieg. The former naval intelligence officer has been declared the winner of the caucuses by the media because, in the results tabulated for 62 percent of precincts, he placed first in the obscure category of “state delegate equivalents,” the metric highlighted by the state party.
In the same tabulation, Sanders won the most votes, both in the initial count and in the second round after “unviable” candidates—those with less than 15 percent support—had been eliminated. Moreover, much of the unreported vote is from college and factory towns where the Vermont senator posted his best results. It is quite possible that Sanders will also lead in delegate equivalents once a final count is reported.
In previous Iowa caucuses, results were tabulated and made public within two hours of voters arriving at the precinct. The candidates proclaimed the winner in the last four contested Iowa caucuses all went on to win the party’s nomination: Al Gore in 2000, John Kerry in 2004, Barack Obama in 2008 and Hillary Clinton in 2016. But there were no media headlines Monday night and Tuesday morning about Bernie Sanders winning the most votes in Iowa in 2020.
Nor were there blaring headlines about the debacle for former Vice President Joe Biden, once the presumed frontrunner for the Democratic nomination, who finished a poor fourth in the tally reported Tuesday afternoon. Biden may actually finish as low as fifth in the final count, since Senator Amy Klobuchar trailed him by only a small margin.

There is no excuse for it.  None.

Wednesday, February 5, 2020.  Two days later and still no results out of Iowa.


On Monday, Iowans turned out to caucus.  That generally means that late that night the country knows the results.  It's not a day later, it's two.  And the results are still unknown.

Iowa is not a vastly populated state.  It has approximately 3.1 million residents and, of those, about a quarter are children (under 18).  By contrast, NYC has a population of 8.6 million and Los Angeles has a population of 4 million.  Those are cities.

By releasing a partial result yesterday evening, the Democratic Party in Iowa did further damage.  We don't need a news dump for the evening news that was about 71% of the tally.  This is outrageous.

So should the hideous Shadow, Inc who sold the state party the new technology.


We sincerely regret the delay in the reporting of the results of last night’s Iowa caucuses and the uncertainty it has caused to the candidates, their campaigns, and Democratic caucus-goers.
5,364 replies790 retweets1,681 likes


That pinned Tweet?  After mid-day Tuesday, that wasn't nearly enough.  Last night?  You mean two nights ago?  Shadow, Inc should announce that they recognize the harm they've done and they'll be closing their doors before they cause further problems.


Ronald Brownstein (CNN) points out, "The meltdown in reporting results made it extremely unlikely that the full momentum that has often followed a caucus victory would flow to any of the candidates [. . .]"


Responsible call by @nprpolitics colleagues, per @NPRnie: “Various individual Democratic campaigns are releasing their own numbers with estimates of how the Iowa caucuses turned out. We are NOT reporting these numbers, which are hand-picked.” We’ll get you reliable results.
14 replies105 retweets849 likes

Will you, Steve?  You will?  Because this morning, you reported on (here for THE MORNING EDITION segment) partial results.  That's not reliable results.  We still do not know who came in first -- we can't know that with what you termed this morning "some vote totals."


I'm not interested in partial counts.  The only thing I will note is that Joe Biden may come in fourth when the full totals are released.  May not, but he may.  In yesterday's snapshot, I noted he came in fifth in 2008 and appeared to do the same this go round.  If the results hold, he will come in fourth.  That's still not enough to justify his remaining in the race.  He had the biggest name recognition.  He had the easiest press.  He was declared the front runner the moment he announced he was running for the nomination.  Bill Barrow and Brian Slodysko (AP) report:

Joe Biden’s third presidential bid enters a critical stretch after a disappointing finish in the Iowa caucuses sent the former vice president on to New Hampshire with a skittish donor base, low cash reserves and the looming threat of billionaire rival Michael Bloomberg and his unlimited personal wealth.
In New Hampshire on Tuesday, Biden insisted he had a “good night” in Iowa even as he trailed the top moderate candidate, former Mayor Pete Buttigieg of South Bend, Indiana, and the leading progressive, Bernie Sanders, according to initial returns from 71% of precincts. Biden was running fourth, close to Minnesota Sen. Amy Klobuchar, who just days ago polled in single digits.
[. . .]
Biden aides have said for months that he didn’t have to win in Iowa or on Feb. 11 in New Hampshire because he was better positioned in Nevada’s Feb. 22 caucuses, South Carolina’s Feb. 29 primary and a slate of March 3 primaries with more than a third of Democrats’ national delegates at stake on a single day.
That never meant, however, that Biden could sustain a bad showing in Iowa and New Hampshire.

"This is a very disappointing finish for Joe Biden," NPR's Mara Liasson observed this morning and noted that this was low even after his campaign had attempted to lower expectations and she noted that some had been saying that  "he really had to come in a close second to in order to raise the money to keep on going."


Not a single poll in Iowa had @JoeBiden performing as badly as he did. They were off, in most cases, by nearly 10%.

We think it shows that Biden’s polling is badly inflated by landline polls and that polling for Biden also misses new voters, young voters, and independents.
74 replies277 retweets1,597 likes

Shaun may very well be right.  However, there may be more to it.  It's also true that historically what this usually means is that people who are really not paying attention and don't plan to vote often say they will be voting when called on the phone for polling.  In other words, you're put on the spot by a pollster and you go with the first name you know while pretending you'll be voting when you actually don't plan to show up.  That really sounds like Joe's base.  Smart campaigns always prepare for that possibility if they're seen as the front runner.

The War in Iraq cost nearly $2 trillion, roughly $8,000 per U.S. taxpayer, representing 9 percent of the national debt.
The current cost to the federal government for conflict zone operations in Iraq is an estimated $1.922 billion, including increases to the base budget in funding from the U.S. Department of State and United States Agency for International Development (USAID), homeland security, reenlistment bonuses, healthcare costs for active-duty and war veterans and accrued interest, according to a new report from The Cost of Wars project.
Without a war tax and few war bonds, direct war spending by the Pentagon resulted in interest payments of about $444 billion, the report estimated. The author warns even if the fighting stopped today, and the Trump Administration pulled out of all ongoing fights in the "Global War on Terror," those cumulative interest payments would continue to rise. If all war spending stopped today the existing war debt would "rise ... to $6.5 trillion by 2050," according to the report's estimates.


While the report does estimate that amount of interest on the debt, they do not attempt to estimate the costs of treatment over the coming years for the veterans of the war.

In Iraq, the protests continue.


The revolution never die, we made it, and will not give up. 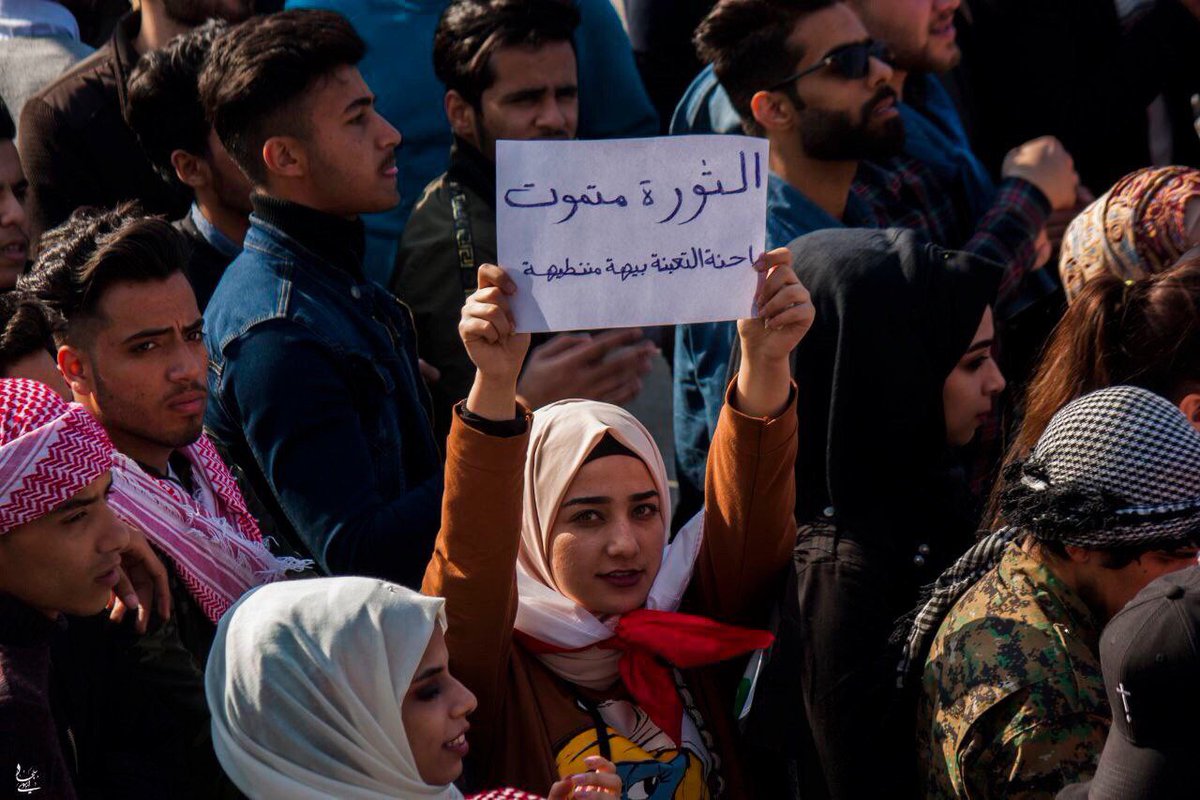 
#Iraq journalist Muntadhar al-Zaidi, who became famous for throwing shoes at President Bush at a 2008 press conference, answers questions on the protests and the contemporary situation in Iraq
0 replies0 retweets0 likes


#IraqProtest #iraq_Protest #iraqprotest #Iraqi_demonstration| Demonstrators inside Tahrir come out with big number of demonstrators against Sadr attitude towards and Calls for resignation of #Mahamad_Aalawi_Tawfiq a new iraqi PM.
/> 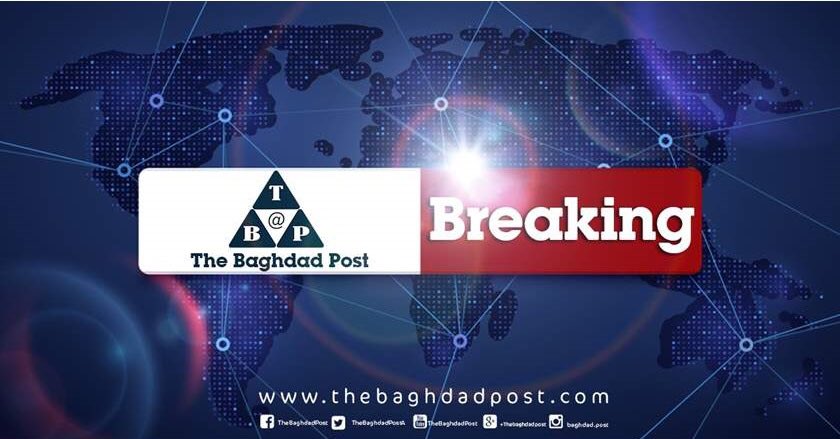 
Is it true?  I have no idea.  Did anyone worry about that when the US was making this deal with Iraq?  Uh, we did raise the issue here.