That makes two servings and each serving is 56.2 carbs.

Dropping the wheat couscous from the recipe, will lower the amount of carbs; however, 56.2 is about the desired amount (for women, for men, it's a little more) when it comes to lunch or dinner.


Wednesday, August 1, 2018.  Despite four years of failure and the Iraqi people rejecting him at the voting booth, the US government is attempting to install Hayder al-Abadi for a second term as prime minister.


A new month begins and yet Iraq still has not formed a government.


Iraq is living this anarchy since 2003. It is irritating that some analyst think that there was some level of stability in Iraq. Since 2003 Iraq is a failure state, chaos and disorder is the norm.
#Iraq
#IraqProtests
0 replies0 retweets3 likes


Where are the adults?  You hold an election, you form a government.  In 2010, it took eight months for Iraq to form a government and this only happened by overturning the votes with the US negotiated Erbil Agreement.  Brett McGruk was the lead on that.  And now he's back in Iraq.


What's he doing?  What we've said he was doing.


.@brett_mcgurk meets with President Barzani for the 3rd time since May 12 elections.
Reports have been circulating in Iraqi media outlets that the #US is strongly pushing for Abadi's second term in office. McGurk wants to convince the Kurds to support the plan.
#Iraq #Kurdistan 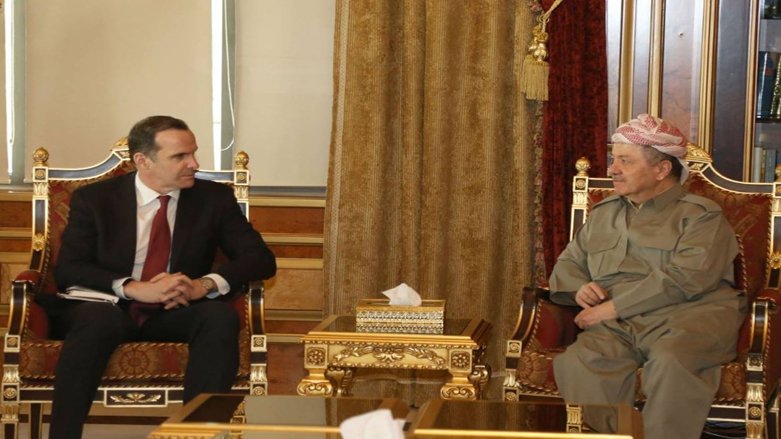 Hayder al-Abadi came in third.  Third.  This is just like when the Iraqi voters said no, in March, 2010, to a second term for thug Nouri al-Maliki and Brett and The Erbil Agreement gave Nouri a second term -- which created the rise of ISIS among other things.

Despite blood being already on their hands, the US government is eager to trash the election results again.

Grasp that and grasp that the incessant caterwauling never ends in the US over claims that the Russians must have interfered in the 2016 presidential election.  As usual, it's narcissism on display.  Me-me-me, only I matter!

So it's outrage over the belief that Russia might have interfered but it's silence over the fact that we interfered in Iraq's election in 2010.  The after effects of that 2010 action led to the rise of ISIS, led to the deaths of many.  And yet the Alyssa Milanos, Patty Arquettes and Debra Messings never express any outrage over that.  By their actions, they make clear that it's okay for the US to interfere in the elections of other countries.

Hayder al-Abadi is a failure.

The Iraqi people said so.

To yet again overturn their will?

Let's stop pretending we want democracy in Iraq.  In fact, let's let the country save millions by not even carrying out a vote if the US government is not going to respect the results or the will of the people.  Just come out and publicly appoint the puppet.  It would be a lot more honest.


PM @HaiderAlAbadi: It is the duty of the government to deliver good services to all Iraqis, maintain security and safeguard Iraq’s stability

Barack Obama picked you and put you in place and you were weak and useless for the Iraqi people.

Hayder is a failure.


Protests are taking place in Iraq.


Clean water and electricity?  Those are not outrageous demands.  Those are basic needs.  Hayder had four years and he has failed to deliver.


And he's done nothing to combat corruption which was a major issue before he was put in place by Barack and what was the leading issue in the May 12th elections.

Iraq brings in billions from oil and yet the people live in poverty and jobs are in short supply.


Iraq has raised more than $700 billion from oil since 2005, but almost the entire amount has been spent, the central bank announced Tuesday.
"A total of $703.11 billion, or 99.5 percent of the amount, has been spent," it said.

Since Prime Minister Haider al-Abadi declared victory over the Islamic State group last December, marking an end to decades of conflict in Iraq, social grievances have boiled over in a series of protests.

And there's no victory over the Islamic State.  It's carrying out attacks pretty much daily in Iraq today.  Just this week, Margaret Griffis (ANTIWAR.COM) penned, "Fresh Anti-ISIS Operations in Kirkuk, Diyala; 34 Killed in Iraq."


Protests continue in Iraq.  Patrick Cockburn (INDEPENDENT) summed them up, "Part of the wave of demonstrations sweeping across central and southern Iraq, they demanded jobs, electricity, water and an end to the mass theft of Iraq’s oil wealth by the political parties."


#Basra now
Protests in #Basra near Qurna oil field 1, This field is one of the largest oil fields in #Iraq
Via: @hasanenalhijaj
#Irak #Insm_iq


#Basra now
Protests in #Basra near Qurna oil field 1, This field is one of the largest oil fields in #Iraq
Via: @hasanenalhijaj
#Irak #Insm_iq 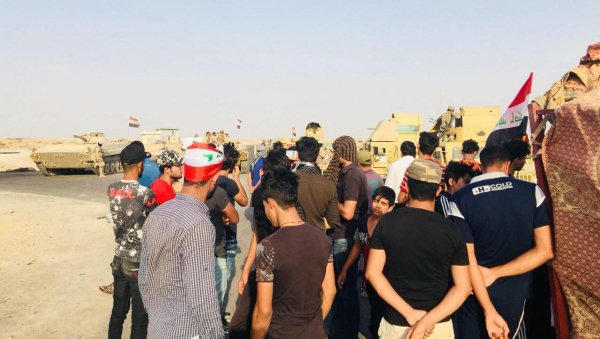 There are no jobs, clean electricity and water are in short supply, ISIS remains operating in Iraq, what has Hayder accomplished in four years?

Not a damn thing.

At least 675 people were killed in Iraq during the month of July. Another 807 were wounded. The number of injured exploded in July due to protests over jobs and services in the southern provinces. About half of the fatalities belonged to Islamic State militants being killed in fresh operations. In June, 772 were killed or found dead, and 294 were wounded.