We can have Medicare for all

Who is keeping us from getting Medicare for all?


Justice Democrats‏Verified account @justicedems  22h22 hours ago
If most House Dems don't support #MedicareForAll, then what the hell does the party stand for? 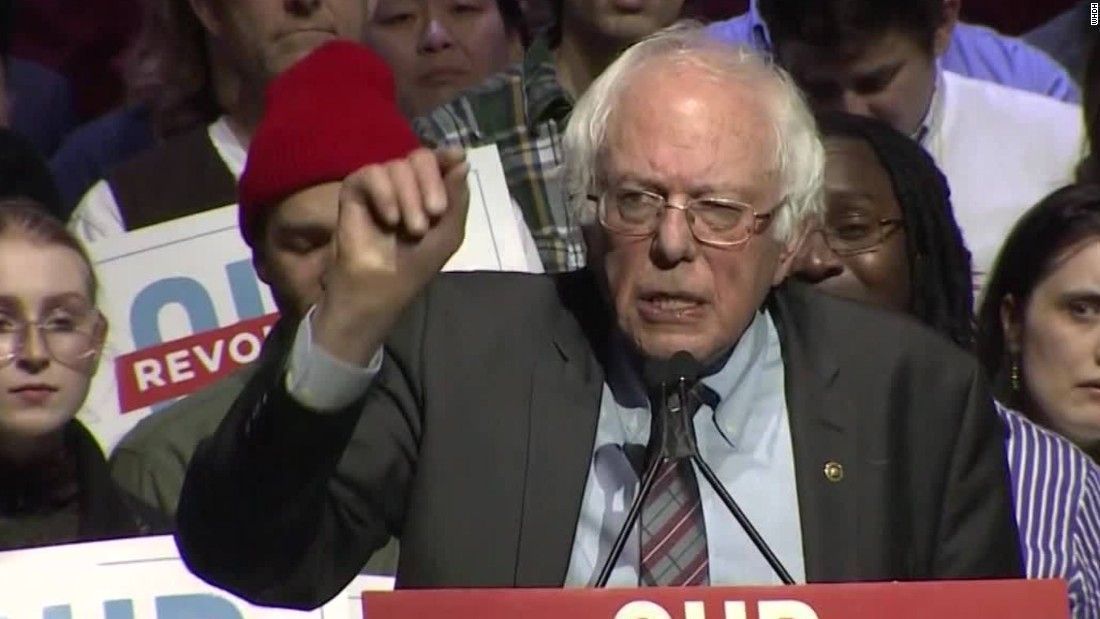 We need to force them to stand for it.

We need to demand.

Hillary doesn't give a damn about you.

If she did, she wouldn't have supported Medicare for all (she opposed it).

All these idiots running around sobbing over 'poor Hillary' -- who is a rich and out of touch person.

Health Over Profit‏ @H_O_P4E  2h2 hours ago
This looks like national consensus to us! Ok @realDonaldTrump - are you with the people? 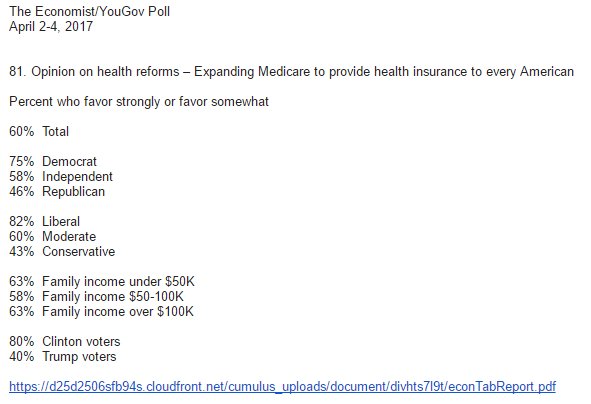 Its what we want.

It's what other countries have.

So why can't our government deliver it to us?

Because we won't demand it.

We won't make it clear that we have to have this.

When we're willing to fight for it -- and not hollow politicians -- then we can have this.

It's time we fought for ourselves and stop worrying about Queen Hillary.

Thursday, April 6, 2017.  Chaos and violence continue as some agitate for even more war.

We're not doing a "Syria snapshot."  Enough Americans have walked away from Iraq, we will keep that our focus for as long as I continue to write here.   But we will note that there is no proof that warrants a war on Syria.  The drums of war are pounding yet again.  Betty said it all with "We don't need another war" and Trina made a good point in "On Mia Farrow and other War Hags:"


There is no compelling reason for war.

That's why she lied about Woody Allen.

And she and the others pimping war need to be called out.

They pretend to care but they don't care about people, they just want war.

Mia was calling on war on the Sudan before she picked up the cause of Syria.

That's what we should call those people, War Hags.

War Hags?  Love that title.  It's also the group that's been dubbed "The Cruise Missile Left."


prominent set of commentators claiming to speak from the left
have aligned themselves with the national leadership in support
of an aggressive military interventionism and projection of
power abroad. This is by no means a genuine left—that
is, one that opposes the powerful in the interest of the non-elite
majority. I call them a “cruise missile left” (CML)
because of their alignment with power and their eager support
of external violence, which is a very important component
of their intellectual labors. One of their cohort, Christopher
Hitchens, even explicitly lauds cruise missiles themselves—“precision-guided
weaponry”—which he finds “good in itself,”
but especially admirable when decimating the forces of evil
that are the official targets (“Its a Good Time for War…,”
Boston Globe,
September 8, 2002).


CMLs often designate themselves the “pragmatic,”
“rational,” and “decent” left and they
spend considerable energy attacking their erstwhile comrades
for failing to keep in touch with the U.S. public, for “reflexive
anti-Americanism” (Todd Gitlin), for “genuflecting
only briefly—if at all—to the [9/11] dead”
(Marc Cooper), for “refusing to acknowledge that the
country faced real dangers” and has a right to defend
itself (Michael Walzer), and for not crediting U.S. policy
with successes when it attacks and removes bad men from power
(Michael Berube et al.), among other leftists’ failings.


CMLs are of course welcomed by the mainstream media, because
they not only support the elite political agenda, they attack
its real left critics with great vigor and with the credibility
of alleged leftists who have escaped “the politics of
guilt and resentment” (Walzer, “Can There Be a Decent
Left?,” Dissent, Spring 2002). Marc Cooper recently
published a second article in the Los Angeles Times
that focused on the recent failures of the peace movement,
attributed to the influence of a left faction “steeped
in four decades’ worth of crude anti-Americanism,”
although why he and the “decent left” haven’t
successfully stepped into the breach and revitalized the movement,
Cooper never makes clear (“Protest: A Smart Peace Movement
is MIA,” LAT, September 29, 2002). CMLs even speak
of the “Chomsky-left” as a generic class of leftists
who are extremist, angry, reflexively anti-American, etc.,
and attacking Chomsky is a favorite outing for CMLs. This
helps improve their access to the mainstream media, where
in addition to garnering publicity they are relatively free
from critical response.

One problem with the CMLs is that, not really being on the
left, they have lost sight of what the left is all about.
The left’s criterion of success is not the extent to
which it is listened to or heard, irrespective of message
content; it is its success in getting a left message across
(and on some issues, like “free trade,” and the
merits of overseas military ventures [except in the heat of
battle and under a furious elite propaganda barrage], the
“radical left” is far closer to mainstream opinion
than is the “decent left,” and it is listened to
on those issues by ordinary citizens when they can be reached).
On issues where it is in a minority position, a real left
does not abandon its position in order to be acceptable. Marc
Cooper objects to the left’s “scold mold” and
its “alienation from its own national institutions,”
and Gitlin calls on the left to be “practical—the
stakes are too great for the luxury of any fundamentalism.”
One can readily imagine the Cooper, Gitlin, Walzer, Berube,
and Hitchens equivalents of the 1850s explaining to the abolitionists
that they must tone down their message and alter or even drop
their anti-racist and anti-slavery message given the “political
realities” and public sentiment. But then, as now, a
genuine left focuses on the struggle against basic exploitative
and unjust policies and structures—it does not give up
its radical educational and organizing role in order to win
transitory victories and gain access and approval from the
mainstream. Most certainly it does not join militaristic bandwagons
and support wars against distant small targets on the grounds
of the evil being attacked in some particular case.

You should also refer to the BLACK AGENDA RADIO interview with Sara Flounders -- where she discusses how some of our so-called friends betray us every time on war.


Groups worked together to sell the Iraq War and they're doing the same with Syria.

I fought in Iraq for 18 months.  To no avail. Country is worse now than before. We need to stay out of Syria. Let them fight for themselves.

They LIED about Iraq & Libya & they are LYING about Syria. No more foreign wars, they only serve the interests of internationalist cliques!

Same neocons who lied us into the Iraq war are at it again.

There are lots of news stories, lots of big debates. They all pale in comparison to the horror of Syria.   wsj.com/articles/trump…

171 days since the operation began and still it drags on.

In June of 2014, the Islamic State took control of the city.  Finally, in October of last year, the Baghdad-based Iraqi government began a plan of action.

That's been the claim.

But the mission's goal has not been to protect civilians.

The March 17th US airstrike is said to be responsible for the death of hundreds of civilians.  Molly Hennessy-Fiske (LOS ANGELES TIMES) reports:

Iraqi officials said Wednesday that they had removed nearly 300 bodies from the site of an apparent airstrike in west Mosul, the largest civilian death toll since the battle against Islamic State began more than two years ago and among the deadliest incidents in decades of modern warfare.
More bodies were being removed Wednesday as the U.S.-led coalition investigated whether it was responsible, Iraqi officials blamed Islamic State, and the injured continued to suffer.
The attack came after government officials urged residents at the start of the Oct. 17 offensive to stay in their homes. Responsibility for the deaths has been disputed, as has the number killed.


They told them not to leave their homes.

And they're still telling the civilians that.


And what's being done?

Iraq's military on Wednesday urged residents to shelter in their homes in jihadist-held areas of Mosul, where its bid to oust the Islamic State group has taken a heavy toll on civilians.
Iraqi forces are battling to recapture west Mosul from IS, killing and wounding hundreds of civilians and pushing more than 200,000 to leave their homes.

The government has encouraged residents not to flee during the fighting -- a policy aimed at easing ease the burden of widespread displacement but which can heighten the risk of injury or death for civilians.


Despite the infamous March 20th strike that left 100s of civilians dead, that's still what they tell Mosul residents?  Don't leave?
They refuse to create a corridor for safe passage to get the civilians out of Mosul.
The Mosul Slog is not about helping Iraqi civilians.
That should be clear by now.

Stop pretending this is about saving the civilians of Mosul.

There have been some calls to compensate relatives of those who died on March 17, 2017, but while the Coalition has not pronounced itself on that particular issue, there can be no compensation for what has happened. The Coalition has stated that its "goal is and has always been zero civilian casualties" and that "ISIS will continue to cause massive human suffering".
But that statement in and of itself barely conceals a massive contradiction, which is, and always has been, at the heart of US policy in Iraq. The US and others have long maintained that ISIL deliberately puts civilians at risk. As early as December 2015, former US President Barack Obama said that ISIL fighters "hide behind civilians, using defenceless men, women and children as human shields".
That being the case, the US had every reason to expect that its decision to destroy entire buildings to eliminate small numbers of snipers would result in massive civilian casualties. The Coalition's carefully constructed strategy was bound to lead to the current outcome.
The US' sanctimonious self-image does not fit well with its own sordid history of involvement in Iraq. The US has become so involved in Iraq's modern history that its footprint can be found everywhere. ISIL may be an outgrowth of radical ideology that was born elsewhere, but it was the United States which supported late Iraqi President Saddam Hussein in the 1980s and which imposed a deadly embargo throughout the 1990s, turning Iraq into fertile ground for those same ideas to grow.
Iraqi security forces have systematically tortured and abused detainees, for which they are rightly condemned. But the United States firmly encouraged the practice in the post-2003 era, by allowing its own forces to torture detainees of its own.

Tellingly, however, in recent years, US officials have simply shrugged when asked to pressure Iraqi officials to engage in prison reform, attributing the problem to cultural values, oblivious to its own role in perpetuating this inhuman practice.

BREAKING
Helicopter of Iraqi forces shot down & it's crew killed by IS fighters above Al Gabat area on the left side of #Mosul city.

And the best our corporate media can do is talk about a "change of tactics" -- thanks, NPR.

The entire missions is built on a false premise.

That government is no better than the Islamic State.

You can be against ISIS and still note that hideous history of the Iraqi government.

Iraqi PM Abadi agreed with a Kurdish delegation yesterday, 5 April, to “remove the obstacles that prevented the activation of Article 140”

For all the talk of rule of law from the State Dept -- under Bully Boy Bush, under Barack Obama and now under Donald Trump -- the US is very selective about which rules and which laws they highlight and back.

Some are excited that Abadi's made a promise.

Those fools don't remember that Nouri al-Maliki made the same promise publicly and then went back on it.

Believe Article 140 will be implemented . . . when it gets implemented -- and not before then.