2016 was the year the press was exposed

I would agree with this.

Mitt Romney was treated poorly by the press.

I didn't vote for Trump.

But as C.I. tried warning in Octoer at THE COMMON ILLS, they were overplaying their hand and creating sympathy for Trump and a backlash.

They really did create that.

But what's worse is that they showed the country what many had thought or feared -- that they weren't impartial.

They come in with an agenda and have a huge problem being honest about that or about anything.

They're shaping the 'news.'

And they should have been fired for what they did in 2016.

Wednesday, February 1, 2017.  Chaos and violence continue as does selective outrage.


A problem so many elected Democrats (as well as figure heads) are having in resisting or 'resisting' Donald Trump is that the only thing worse than the smell of fear is the smell of rank hypocrisy.

Pelosi to Yemeni refugee: "Your family is suffering because our president is reckless" cnn.it/2jT3qDj
32 replies276 retweets284 likes


Nancy Pelosi should have been dumped as House Minority Leader the minute she became that.

Another reason she should have been dumped?  She's a hypocrite whose public statements are embarrassing.

But most importantly, she has betrayed the voters repeatedly.

Who took impeachment off the table?

In 2006, who said give us control of one house and we'll end the Iraq War?

Nancy Pelosi -- and America gave the Democrats control of both houses of Congress in that 2006 mid-term election.

They have no ethics.

Many sold out their ethics in the last 8 years to avoid calling out then-President Barack Obama.

Some, of course, never had ethics.

No, I don't mean she slept with Gloria Steinem.  (At least, not as far as I know, but good for them if they shared a moment.)

Just as Henry Kissinger is vilified by those of us on the left (except Gloria Steinem -- but, hey, she slept with Mort too, remember?), Maddie is vilified as well.

You have to wonder how she fails to grasp that reality?

She is hated around the world.

If she truly wanted to help the Democrats, she would shut up because she would know that anything she says only hurts whatever cause she's supposedly trying to help.

You can't kill children -- half a million -- and pompously say -- on TV -- that the cost was worth it and expect to be seen as a humanitarian.

I seriously have to wonder if those little voices in Mad Maddie's head whispering to her "Speak up!  Weigh in!" aren't actually the ghosts of Lee Atwater and Murray Chotiner?


An Iraqi woman has died.

Elderly green card-holder who'd lived in US since 1995 dies in Iraq after being refused reentry to US fox2detroit.com/news/local-new…
57 replies1,044 retweets595 likes


We're noting Garance because she's not a drama queen -- this incident has resulted in many drama queens grabbing their tiaras and crawling out of the woodwork.

It's not unheard of.

From the video report, which is not a medical report, it appears she would have gone at any second.


The son says, "I really believe this in my heart, if they would have let us in, my mom, she would have made it and she would have been sitting right here next to me.  She's gone because of him.”

These are the heartaches that happen every day with immigration.

I'm really happy for so many of you that this is novel and new.

How fortunate you are to have never been exposed to the heartaches that so many Americans experienced when they became Americans.

Heart ripping stories -- much worse than the 75-year-old woman's -- are a reality.

But good for you that you've been so sheltered and protected -- and, yes, uncaring -- that this is your first encounter with a hardship.

A woman dies of natural causes and you're horrified.

Is it because there's a video?

Is it just because Donald Trump is president?

I just know you weren't horrified or marching for the Ashraf residents.  Their deaths weren't by natural causes.  And their deaths were due to the US government.


A quick recap. Approximately 3,400 people were at Camp Ashraf when the US invaded Iraq in 2003.  They were Iranian dissidents who were given asylum by Saddam Hussein decades ago.  The US government authorized the US military to negotiate with the residents.  The US military was able to get the residents to agree to disarm and they became protected persons under Geneva and under international law.  When Bully Boy Bush was in office, they were protected and remained at Camp Ashraf.  That all changed when Barack Obama was sworn in as US President in January 2009.


After Barack became president, it was one attack on the residents after another.   July 28, 2009 Nouri launched an attack (while then-US Secretary of Defense Robert Gates was on the ground in Iraq). In a report released this summer entitled "Iraqi government must respect and protect rights of Camp Ashraf residents," Amnesty International described this assault, "Barely a month later, on 28-29 July 2009, Iraqi security forces stormed into the camp; at least nine residents were killed and many more were injured. Thirty-six residents who were detained were allegedly tortured and beaten. They were eventually released on 7 October 2009; by then they were in poor health after going on hunger strike." April 8, 2011, Nouri again ordered an assault on Camp Ashraf (then-US Secretary of Defense Robert Gates was again on the ground in Iraq when the assault took place). Amnesty International described the assault this way, "Earlier this year, on 8 April, Iraqi troops took up positions within the camp using excessive, including lethal, force against residents who tried to resist them. Troops used live ammunition and by the end of the operation some 36 residents, including eight women, were dead and more than 300 others had been wounded. Following international and other protests, the Iraqi government announced that it had appointed a committee to investigate the attack and the killings; however, as on other occasions when the government has announced investigations into allegations of serious human rights violations by its forces, the authorities have yet to disclose the outcome, prompting questions whether any investigation was, in fact, carried out."  Then they were moved to Camp Liberty which hasn't offered any additional protection.   There, the attacks continued, starting with an attack on February 9, 2013.  TREND NEWS AGENCY noted 10 dead and over one hundred injured.  PRENSA LATINA reported, " A rain of self-propelled Katyusha missiles hit a provisional camp of Iraqi opposition Mujahedin-e Khalk, an organization Tehran calls terrorists, causing seven fatalities plus 50 wounded, according to an Iraqi official release." More attacks followed including June 15, 2013 -- ALSUMARIA reported a mortar attack on Camp Liberty which left 4 of the former Camp Ashraf refugees dead and twenty-two people injured (16 were Iranaian and Ashraf refugees, 6 were Iraqi).

These deaths were the fault of the US government.


But throughout Barack's first term nothing was done to protect them.

And nothing was done to relocate them.

I love those clutching the pearls over Donald being in violation of a court order.

In 2010, a federal court ordered Secretary of State Hillary Clinton to assess the status of the residents of Camp Ashraf (her husband's administration had put them on a terrorist watch list in the 90s).


She defied that order.

Congress then told her that she must make a determination in 180 days.  Those days came and went with Hillary still in defiance.

A federal appeals court has ordered Secretary of State Hillary Clinton to make a prompt decision on whether to remove an Iranian dissident group from the State Department's list of foreign terrorist organizations.
The United States Court of Appeals for the District of Columbia gave Clinton four months from Friday to deny or grant Mujahedeen-e-Khalq's request for removal from the list, or the court would issue a so-called writ of mandamus and remove the group itself.

"We have been given no sufficient reason why the secretary, in the last 600 days, has not been able to make a decision which the Congress gave her only 180 days to make," the court said in its ruling. "If she fails to take action within that (four month) period, the petition for a writ of mandamus setting aside the (foreign terrorist organization) designation will be granted."

Grasp that during this, the residents were being attacked by Iraqi forces.


Grasp that people were kidnapped from the camp.

Grasp that relocation was impossible while these residents were on a US terrorist list.

But Hillary resisted and defied.

And all the people protesting in January were no where to be seen.

To speak out in defense of the group was to be suspect.  Not just insulted but suspect.

Ed Rendell was persecuted for his defense of the residents.  I was 'unofficially' asked by the Justice Dept what my role was?  Patrick Kennedy was smeared.

All because the administration wanted to make the issue disappear.


It took courage to defend the residents.

And there family members and friends of the community in the US -- many in California -- who showed great bravery by protesting.  They'd show up for Congressional Committee hearings dressed in yellow.  California members of the House of Representatives stood with the Ashraf community.

Finally, with mere days left to comply with the latest court order, Hillary did something:

Office of the Spokesperson
Washington, DC
September 28, 2012
The Secretary of State has decided, consistent with the law, to revoke the designation of the Mujahedin-e Khalq (MEK) and its aliases as a Foreign Terrorist Organization (FTO) under the Immigration and Nationality Act and to delist the MEK as a Specially Designated Global Terrorist under Executive Order 13224. These actions are effective today. Property and interests in property in the United States or within the possession or control of U.S. persons will no longer be blocked, and U.S. entities may engage in transactions with the MEK without obtaining a license. These actions will be published in the Federal Register.
With today's actions, the Department does not overlook or forget the MEK's past acts of terrorism, including its involvement in the killing of U.S. citizens in Iran in the 1970s and an attack on U.S. soil in 1992. The Department also has serious concerns about the MEK as an organization, particularly with regard to allegations of abuse committed against its own members.
The Secretary's decision today took into account the MEK's public renunciation of violence, the absence of confirmed acts of terrorism by the MEK for more than a decade, and their cooperation in the peaceful closure of Camp Ashraf, their historic paramilitary base.
The United States has consistently maintained a humanitarian interest in seeking the safe, secure, and humane resolution of the situation at Camp Ashraf, as well as in supporting the United Nations-led efforts to relocate eligible former Ashraf residents outside of Iraq.

Even then, re-settling dragged on.

And the US government wasn't rushing to welcome these residents.

As early as 2009, Democrats and Republicans in the House were talking about the need to protect the residents.


How can you not be aware of that?

How can you not be aware that the Iraq War continues.

Press Release: A total of 403 Iraqis killed and another 924 injured in acts of terrorism, violence & armed conflict in #Iraq in January 2017 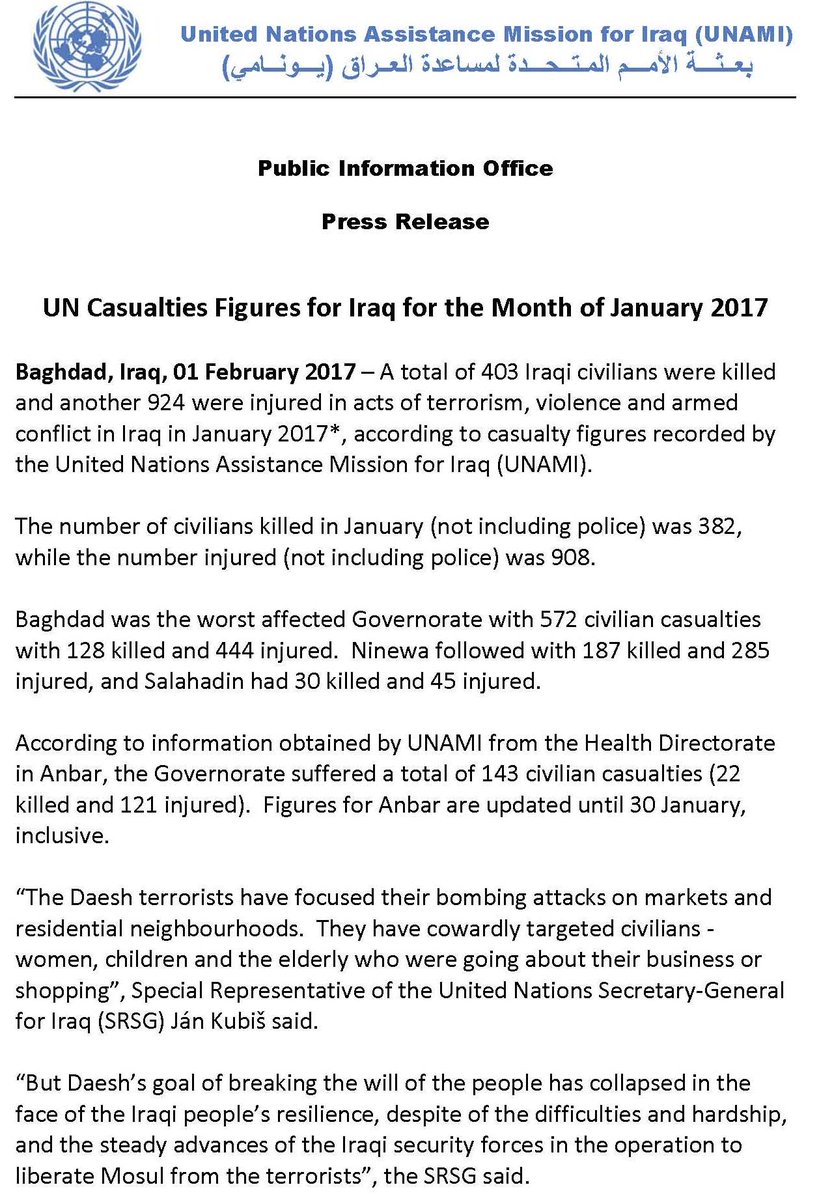 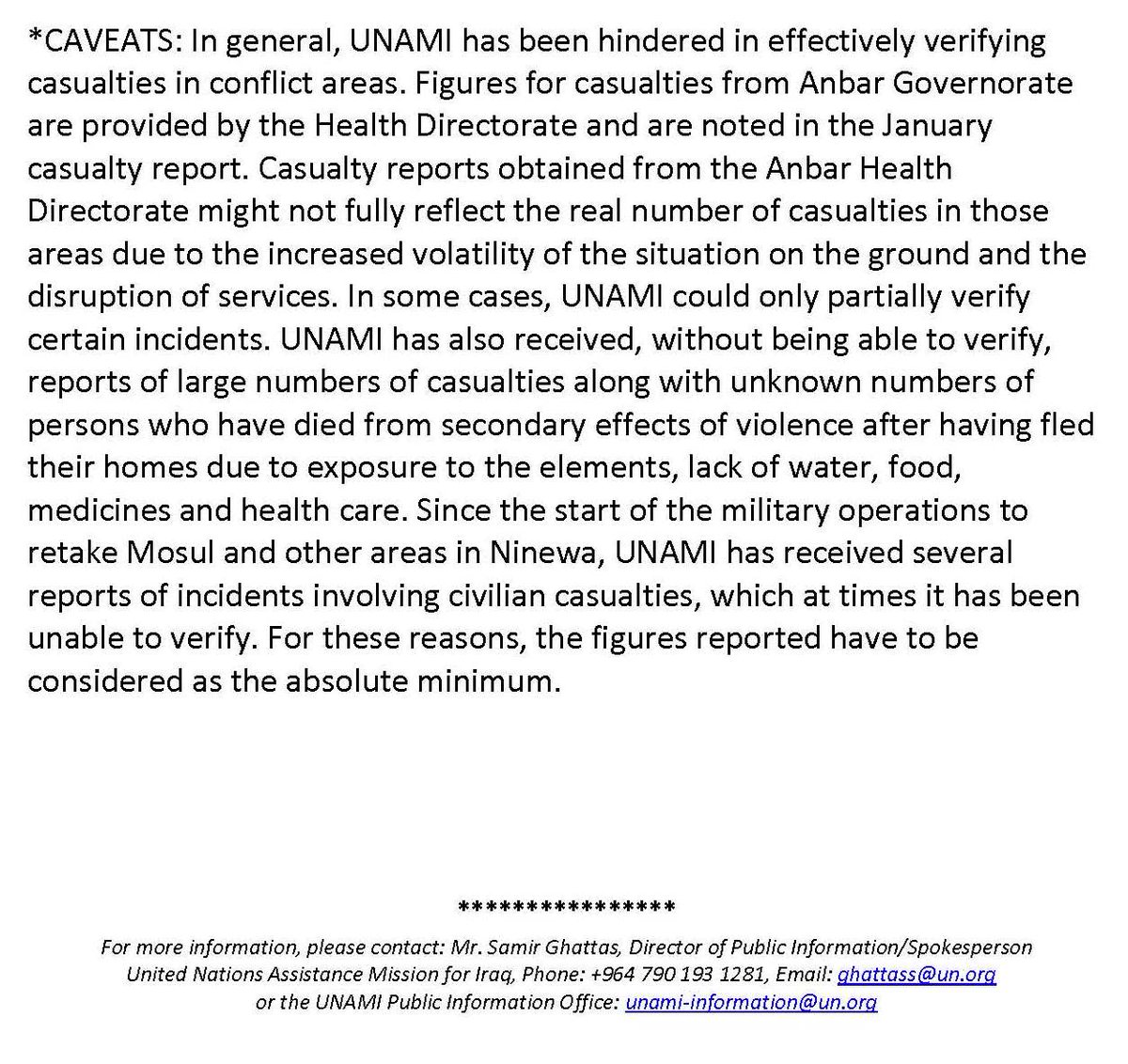 Just out:  UN casualties figures for #Iraq for the month of January 2017.
Press Release here:  bit.ly/1l6zGD1
0 replies4 retweets1 like 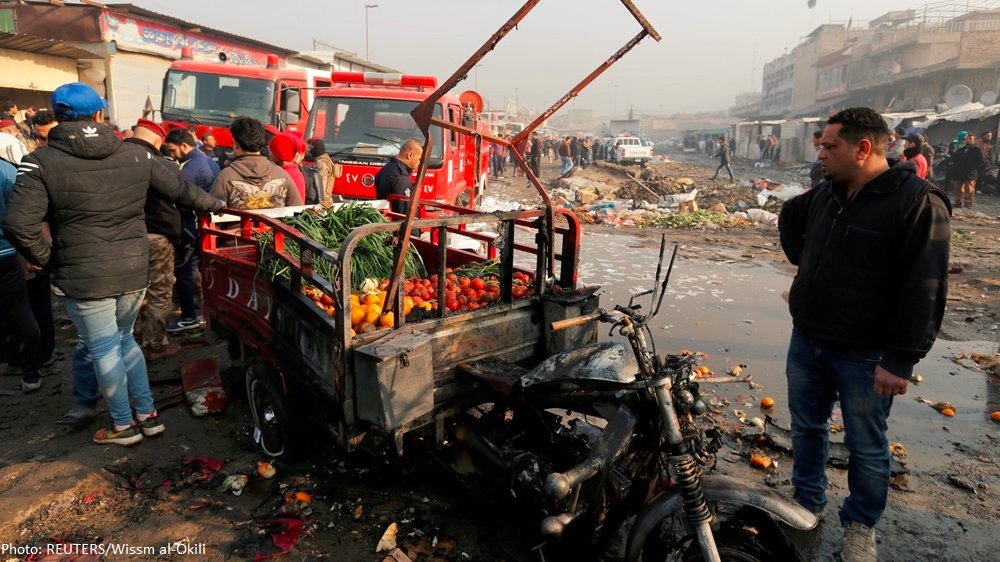