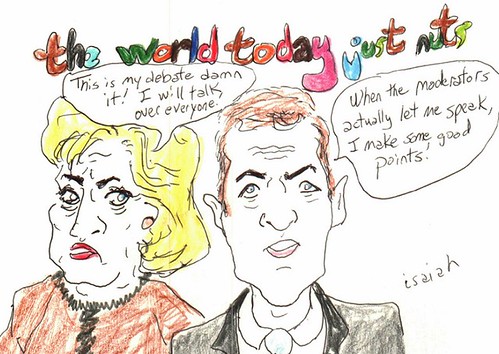 That's  Isaiah  cartoon "Who's Debate Is It Anyway?" covering the Democratic Party debate and specifically Martin O'Malley and Hillary Clinton.

I thought O'Malley came off well in the debate -- the only one noting the need for diplomacy and the need for the US government to respect the law and stop pursuing regime change all over the world.

So today is Christmas.

If you have young children in your homes, I hope Santa visited.

But I have at least twenty e-mails from readers who complain about visiting -- specifically.

To Jackson, you are right.

He's the only one I'm saying that about.

His friend Monica was supposed to come over at eleven and they were going to go have a Christmas lunch together.

She got all pissy because she's an idiot (from the e-mail), a fifty-year-old woman kidding herself that K-Pop (I kid you not) is not just the new thing but the new thing for her.  So she go t mad about another friend insulting K-Pop and just decided to blow everyone off including the Christmas lunch with Jackson.

He's right to be furious.

If you're mad because someone told you they couldn't come -- told you ahead of time -- get over it.

If you throw a fit, you're going to tick off whomever.

Grasp that a lot of people are being pulled in various directions.

By all means, let the person know they were missed but don't guilt them and certainly don't gripe at them.

Wednesday, December 23, 2015.  Chaos and violence continue, the Ramadi effort has already hit a snag, the Islamic State is popular in Mosul, Barack Obama finally weighs in on the persecution of Iraqi Christians, and much more.

Susanna Capelouto and Hamdi Alkhshali (CNN) note, "Iraq's military is just a half-mile away from the ISIS-held government compound in Ramadi in Iraq's battle to retake the city from the terrorist group, the head of Iraq's joint forces said on state television."  Maher Chmaytelli (REUTERS) adds, "Iraq's army chief was quoted on Wednesday as saying he needed only days to drive Islamic State from Ramadi, the city whose fall in May exposed the weakness of the Baghdad government and dampened hopes of restoring control in the north and west."


But the march to success, as has repeatedly been the case so far, hit a bit of a snag.

A new push by Iraqi forces to retake Ramadi appeared to stall Wednesday in the face of resistance from Islamic State fighters, a day after government troops made quick progress toward the center of the strategic city just 60 miles from the capital.
By Wednesday afternoon, Iraqi forces had paused within 800 yards of a former government compound in the city center that they are aiming to recapture, said Gen. Talib Sheghati, head of Iraq’s Joint Operations Command which coordinates with the U.S.-led coalition battling Islamic State.


The Iraqi forces vastly outnumber the Islamic State in Ramadi.

But even that's not apparently enough to get them to press forward.

This morning,  Falih Hassan and Kareem Fahim (NEW YORK TIMES) reported that even more Iraqi troops are being sent to Ramadi (yesterday, there were 10,000 -- for the 350 Islamic State fighters) and that, according to US military spokesperson Col Steven Warren, "there had been no significant developments in the battle to reclaim the city."


All of those forces, a bridge via the US and bombings from war planes?

Strikes in Iraq
Attack, bomber, fighter and remotely piloted aircraft conducted 24 strikes in Iraq, coordinated with and in support of Iraq’s government:

-- Near Huwayjah, one strike struck an ISIL tactical unit.

-- Near Sinjar, one strike struck an ISIL tactical unit.

-- Near Sultan Abdallah, one strike struck an ISIL tactical unit and destroyed an ISIL fighting position.

-- Near Fallujah, one strike destroyed an ISIL bunker.

-- Near Tal Afar, one strike struck an ISIL tactical unit.


Those war planes, bombing non-stop since August -- of 2014!  And achieving so little -- so little that some might even argue they've achieved nothing.

in the terminal where dreams
let so many tickets through
when strangers look in faces
and see somebody there they knew
you might meet me tomorrow
as all the lights are blooming green
and you're feeling a little lonely,
a little sad, a little mean
remember a place
inside of that hotel
where you could do anything you want to do
you couldn't tell
If it's more trouble than it's worth
ah, this is more trouble than it's worth
-- "Living It Up," written by Rickie Lee Jones, first appears on her album Pirates


More trouble than it's worth?

June 19, 2014, US President Barack Obama insisted that Iraq's crises required a political solution.  But he's refused to address that issue.  He's poured everything into a military approach and ignored diplomacy.


And there's been no real advance.


Even if Iraqi forces were to reoccupy all of the areas now controlled by IS and the Syrian city of Raqqa – now its unofficial capital – was liberated, without serious reform a group like the IS and all the chaos it causes will just re-emerge from the ashes, warns says Zaid al-Ali, an Iraqi lawyer and author of the book The Struggle for Iraq's Future.

"Without serious security sector reform and serious justice sector reform in Iraq there is absolutely no point engaging in any of these initiatives," says Ali, also a visiting lecturer and fellow at Princeton University.
Instead of dealing with the threat of Islamic State militants by undertaking military and police operations based on good intelligence, Iraqi forces were randomly rounding people up, arresting them and forcing them to pay bribes to get out.
"The justice system is equally shambolic … in most cases the most senior leadership of [IS] get away scot free while the people who cannot afford to pay bribes are left behind," Ali says.


The government's persecution of the Sunnis is why the Islamic State got its foothold in Iraq to begin with.  As world governments ignored the targeting of Sunnis, the only group that appeared to stand up for them was the Islamic State.


Research published by IIACCS, a reputable polling firm in Iraq, shows that support for ISIS among residents living in Mosul, the nation’s second-largest city, has steadily increased since it fell to the terror group 18 months ago. The survey also found that residents’ doubts about the Iraqi Army, and about the aggressive anti-ISIS air campaign led by the United States, are lingering.
Nearly 40 percent of people surveyed said ISIS represents their views and interests. That’s up from just 10 percent in June 2014, the month the militants seized control of the city. Around 34 percent of participants said that they now support the Islamic State’s self-declared caliphate and 39 percent would like jihadists to maintain control of Mosul.

You have to address the root causes.  If you don't, you will never defeat the Islamic State.

With Christmas falling this year a day after Prophet Mohammad's birthday, the city of Baghdad is holding Christmas celebrations in a sign of brotherhood with Iraq's hard-pressed Christian community.
Fireworks will illuminate the Tigris river every night of the week and a 25-metre (82 feet) Christmas tree has been set up in Zawraa public park. In Zayuna camp, in the east of the city, children listened to Christmas carols on Wednesday and danced with Santa Claus to Iraqi songs.


And about there, reporting ends and whoring begins.

They're all whoring.  One outlet after another.

The Islamic State, we're told has destroyed life for Christians in Iraq.

They apparently believe news consumers are so stupid that they can't remember a year ago or two.

Every year, the press has reported how difficult things are for Iraqi Christians.

Long before the Islamic State emerged, the troubles were via Shi'ite militias.


Barack has long been accused of avoiding the persecution of Iraqi Christians -- among others.  But this year, he issued a statement.

The White House
Office of the Press Secretary
For Immediate Release

Statement by the President on Persecuted Christians at Christmas

During this season of Advent, Christians in the United States and around the world are preparing to celebrate the birth of Jesus Christ.  At this time, those of us fortunate enough to live in countries that honor the birthright of all people to practice their faith freely give thanks for that blessing.  Michelle and I are also ever-mindful that many of our fellow Christians do not enjoy that right, and hold especially close to our hearts and minds those who have been driven from their ancient homelands by unspeakable violence and persecution.
In some areas of the Middle East where church bells have rung for centuries on Christmas Day, this year they will be silent; this silence bears tragic witness to the brutal atrocities committed against these communities by ISIL.
We join with people around the world in praying for God’s protection for persecuted Christians and those of other faiths, as well as for those brave men and women engaged in our military, diplomatic, and humanitarian efforts to alleviate their suffering and restore stability, security, and hope to their nations.  As the old Christmas carol reminds us:
The Wrong shall fail,
The Right prevail,
With peace on earth, good-will to men.


So there you have it, when he can't blame the persecution on the Islamic State, he has nothing to say.  When he can blame it on IS, he rushes to finally weigh in.

Congrats are in order for Shaima Qassem Abdulrahman! The 20-year-old student was recently crowned Miss Iraq, becoming the first to receive the honor since 1972. But as her country is facing some turmoil, Shaima’s win comes with several death threats for her involvement with the competition. Despite the scary circumstances, the newest Miss Iraq is hopeful that her title will have a positive affect on all Iraqi women.

Kate Storey covers the for ELLE here.  Faisal Al Yafai (THE NATIONAL) finds the whole thing to be a sham and offers:


It is a country where, while young Iraqis walk down a catwalk, it is still unsafe for women (and men) to walk down the street.
Where the number of women in work has plummeted since the US invasion. Where female political representation, though mandated by law, is contorted by political parties. Where the legal system cannot provide justice for the crimes committed against women by both Iraqis and Americans.
It isn't clear how any of those issues will be progressed by young girls wearing nice clothes and parading on a stage in front of judges. Nor is it especially clear how their doing so constitutes a “celebration of life”.