I did not know about the nurses striking in Vermont until I read Mike Ingram's WSWS article today.  Here's the opening:

Nurses at the University of Vermont Medical Center (UVMMC) in Burlington held a 48-hour strike last week after months of negotiations for a new contract stalled with no agreement between management and the union. Nurses are demanding increased wages and an end to understaffing, which has led to exhausting shifts for hospital workers and dangerous conditions for patients.
The Vermont Federation of Nurses and Health Professionals (VFNHP) called a vote to authorize a two-day strike if its demands for a 24 percent pay increase over three years was not met before the July 9 expiration of a three-year contract.
In a June 13 vote, nurses overwhelmingly supported the strike call with 1,311 of the 1,800 union members voting 96 percent in favor of a walkout. The two-day strike began July 12 after last-minute talks failed to bring about an agreement. The action received widespread support from workers across the state.
UVMMC proposed a 13 percent pay raise over a three-year contract. The union is demanding a 13 percent across the board increase for registered nurses in the first year and a 4.75 percent increase in each of the next two years. The union is also demanding a $15 minimum wage for all hospital workers. According to UVMMC, there are currently 900 of the 8,000 hospital employees who are paid less than $15 an hour.
Nurses are also demanding increased staffing levels. The hospital routinely uses hundreds of so-called “travel nurses” who work at UVMMC on 13-week stints to cover for staff shortages, which are in large part are due to nurses leaving the hospital in search of better pay and conditions.

As I've noted, I am an RN.  I'm in Big Mass and I hadn't heard about this.  Vermont's not that far from me.  It's another reason to appreciate WSWS which remains one of the few outlets that covers issues that actually matter to our lives.

You can contrast that with the corporate media represented by Borzou Daragahi: 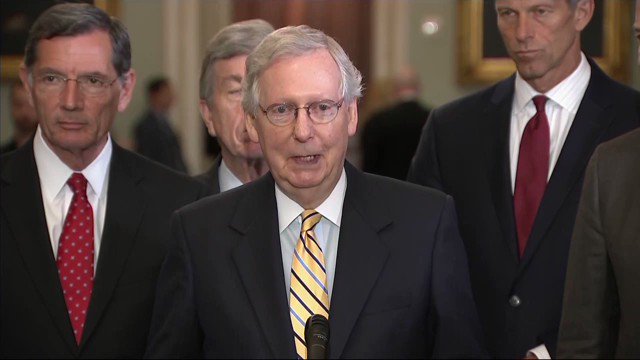 1:09
POLITICOVerified account @politico
"We value the NATO treaty [and] we believe the European Union countries are our friends and the Russians are not," McConnell said Tuesday.
5 replies6 retweets17 likes

For those who don't grasp what he's saying, he's referring to where someone is appointed -- in England, it might be the son of a king -- and they are in charge.


Iraq's going to hell but all the corporate whore like Christiane Amanpour can do is have hissy fits on air because Donald Trump has upset their status quo.  How sad. But she's been sad and stupid for years.

In fairness to the whore, most say CNN lost interest in Iraq when they could no longer spin on CNN MARKETPLACE MIDDLE EAST (that show ended in 2007). Which would explain why even Sunday's CONNECT THE WORLD (with guest host Lynda Kinkade) "a very special CONNECT THE WORLD" (Lynda insisted) that focused on . . . The World Cup.

Yes, yes, please give us the news we need, CNN.  Please let's celebrate the whorish and the awful trash that they serve up day after damn day.

CONNECT THE WORLD?  No, distract the poor sap who thinks they're going to get news by tuning into CNN.

The world is watching Iraq, even if the US isn't.  Bel Trew (INDEPENDENT) notes:

At least three protesters have been killed and dozens injured in Iraq, after week-long rallies against soaring poverty gripped the oil-rich but neglected south of the country.
On Sunday, security forces fired into crowds in Samawa town, 170 miles south of Baghdad, killing at least two people, when a mob stormed a courthouse.

It followed the death of another protester last Tuesday in Basra, Iraq’s second largest city, where the rallies first erupted.

If his facts are a little shaky, he's reporting from Israel.

The death toll is far greater.  IRAQI SPRING MC has been noting it repeatedly.  Here's ALJAZEERA:

Protests have spread to more Iraqi cities after a week of violent demonstrations in the oil-rich city of Basra where at least seven people were killed, dozens wounded, and hundreds arrested, police and activists said.

And ALJAZEERA updates the death toll to eight in this video report. 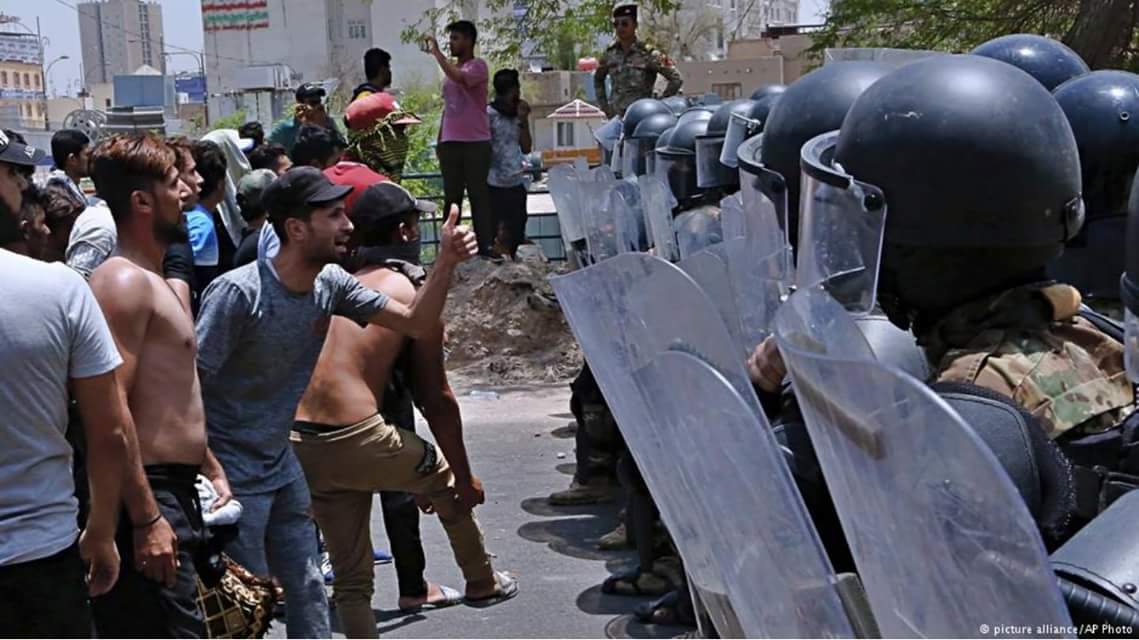 ALL IRAQ NEWS reports prime minister Hayder al-Abadi met with a delegation from Najaf today and he insisted that the Iraqi government respected the right of the people to protest.


Sunday, 3 protesters were killed in Samawah with fifty more injured.  Maysan province saw twenty-three people injured.  Curfews were imposed, social media sites were blocked and the internet was taken down in some areas.

Who is behind the attacks on these protesters?

It's Hayder.  Hayder al-Abadi ordered the attacks.  These attacks started on Saturday.


#BREAKING: Now, #Iraq|i Army Counter Terrorism units are using machine guns to suppress pro-#MoqtadaSadr armed protesters in #Basra, #Iraq. They are protesting due to #WaterCrisis after #Iran decided to not sell water to #Iraq due to #WaterCrisis in #Khorramshahr. #BasraProtests


The media could not be played.


#BREAKING: This is most recent video from #Basra which shows #Iraq|i Army counter terrorism unit deployed from #Baghdad using machine guns to scare #BasraProtests protesters & disperse them. Pro-#MoqtadaSadr media are falsely claiming these are #Iran|ian forces or militias!!


DAVID GREENE, HOST:
Let's turn now to Iraq. The most widespread protests since 2003 are sweeping through the southern part of the country right now. Demonstrators have been gathering for a week. They are demanding jobs, also better services. And in response to this, the Iraqi government has sent army and counterterrorism troops. NPR's Jane Arraf has been monitoring these protests, and she joins us from Amman, Jordan.
Hi, Jane.

GREENE: So why are these protests happening, and what is the timing of them here?

ARRAF: Well, first of all, this morning in Basra, it's 115 degrees.

ARRAF: And the temperature's rising. It is hot. And so imagine you're sitting in that degree temperature, and you turn on the tap, and all you get is salty water, and then the electricity goes out. And they've been dealing with this for 15 years since the U.S. invaded Iraq and promised them better lives, and they just haven't got it. So they've been demonstrating.

ARRAF: At this particular one, which is outside government offices in Basra, they're calling for the downfall of the Iraqi government. Now, that's something you hear a lot, but these protests are so widespread, they're a little bit different. One of the demonstrators, Haider al-Halfi (ph), who describes himself just as citizen, lists the reasons that they're out there.


ARRAF: Now, he's saying that employment has increased; there are no public services. He said they want what the rest of Iraq has. And another demonstrator says they want dignity. And when you're talking about young men, what they mean by dignity a lot of times and in this case is they want jobs.


ARAB WEEKLY explains the job situation, "The oil sector accounts for 89 percent of the state budget and 99 percent of Iraq’s export revenues, but only one percent of jobs, as the majority of posts are filled by foreigners.  Officially, 10.8 percent of Iraqis are jobless, while youth unemployment is twice as high, in a country where 60 percent of the population is aged under 24."

Where are the jobs?

A protester told AP, "I will not leave my place here until I get all my rights. The government lies to us, they always give us such promises and we get nothing." Noel King observed on NPR's MORNING EDITION, "They're demanding jobs and better services. And in response to these protests, the Iraqi government has sent army and counterterror troops into the south."


Let's be clear what's going on because it is a War Crime but it's also supposed to mean that -- per the Leahy Amendment -- the US cut off all aid and assistance.  Hayder's using weapons supplied by the US and training conducted by the US to attack the Iraqi people.

A protester tells Sofia Barbarani and Naser Al Wasmi (THE NATIONAL), "They are firing live ammunition and teargas."  And why are the rallies spreading?  Barbarani and Al Wasmi explain, "Demonstrations in southern Iraq are not unusual in scorching summer weather, but they boiled over last Tuesday, when security forces opened fire, killing one person and wounding five."

This is what the War Whores of CNN and elsewhere are ignoring.

Why?  Well, they're whores and they don't do very well about calling out the US government.  Oh, they can whine about how Donald Trump upset their delicate sensibilities but they're not going to call out official US policy, they never really do.

So most Americans don't know what's going on.

They certainly didn't hear about it from Goody Whore or her hideous DEMOCRACY NOW! which couldn't even note Iraq in a headline today.  Amy Goodman doesn't give a damn about Iraq.  She only used it to bilk PACIFICA -- a public radio network that begs for donations -- out of millions.  Amy got rich off the Iraq War.  That's the truth.


XINHUA notes that today was the 9th day of protests and that, today, the protests spread to Baghdad:

In Baghdad, demonstrators rallied in Tahrir Square in downtown the capital, raising Iraqi flags and confirming their solidarity with demonstrators in the southern cities of the country.

The protestors raised banners and placards, urging the security forces to stop using violence against the demonstrators who demand their rights of better public services.

Some banners read "No to violence against demonstrators" and "Public services are rights guaranteed by the Constitution for all Iraqis."


"The demonstrators pledged to continue to protest until the government meets their demands," Ali Akram, one of the protestors, told Xinhua.

REUTERS has a photo essay of the protests here.

REUTERS also notes, "Local officials said demonstrations have not affected crude production in Basra, whose shipments account for more than 95 percent of OPEC producer Iraq’s state revenues. Any disruption could have a severe impact on the country’s limping economy and push up global oil prices." BLOOMBERG rushes to reassure with, "Iraq is pumping oil at normal levels even as protests spread across the southern region from where OPEC’s second-biggest producer exports most of its crude, according to a government spokesman."


Well maybe if the protests upset the oil supply, CNN, DEMOCRACY NOW and so many others can finally discover the protests and the Iraqi government's violent reaction to them.

In other violence, the US Defense Dept announced today:

Strikes in Iraq
There were no reported strikes conducted July 10-15 in Iraq.

On July 9, coalition military forces conducted a strike consisting of three engagements against ISIS targets near Diyala. The strike engaged an ISIS tactical unit and destroyed two ISIS motorcycles, an ISIS-held building, an ISIS vehicle and an ISIS supply cache.