I don't get the nostalgia

Ian56‏ @Ian56789 14h14 hours ago
The Obamas created Slave Markets in Libya after turning it into a Failed State by overthrowing Gaddafi. Soooo "Liberal" https://www.theguardian.com/world/2017/apr/10/libya-public-slave-auctions-un-migration …

Slavery in Libya.  That's because of Barack.

We could offer many more examples.

They were interested in trying to rig history.  Not record history, rig it.

So they covered for him over and over while he killed people repeatedly.

He's about as worthless as any other person who's held the job.

At least with him, we're not pretending he's a genius and so wonderful.

And laughed about his drone use -- making a 'joke' about going after the Jonas Brothers which was as appalling as Bully Boy Bush's joke about "those WMD have to be somewhere."

Barack was not a friend.

Maybe if you're a xenophobe, he was.

But the world lived in terror throughout his two terms.

So quit kidding that it was wonderful for everyone.

I don't get this nonsense of how great it was -- it was only great if you buried your head in the sand.


CJR reminds that a large number of journalists were killed last year. 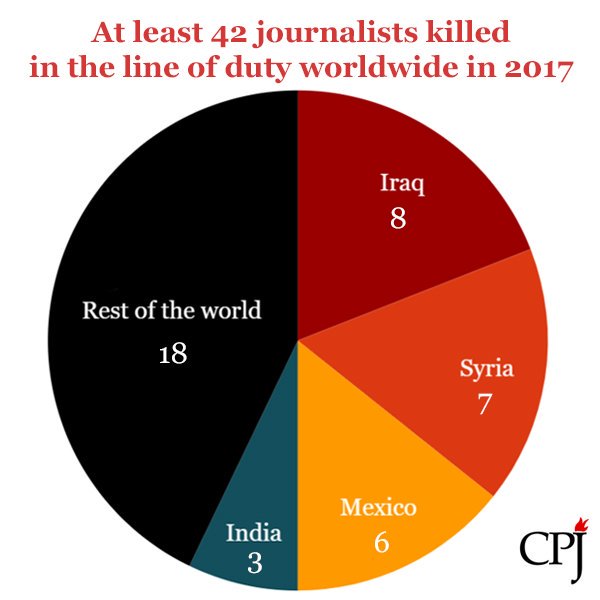 
The most deaths took place in Iraq.

The 8 killed are here.

Over at David Brock's bordello, Oliver Willis tries to start a conversation.

The difference between me and many of you is I can't forgive or overlook the transgressions of these righties. The last 20 years laid the groundwork for today. I don't care how anti Trump someone like Bill Kristol is, Iraq still happened. Those people are still dead.

This leads to a lop-sided conversation because there are so many problems with Oliver's statement.

Hillary's support for the Iraq War, for example, was rooted in her support for Bill Kristol.  They share many beliefs which is why he's been an adviser to her (as well as to Barack Obama) and why he backed her in 2016.

But Oliver wants to pretend that didn't happen.

His followers can be even more obtuse.

They think Kristol and Trump are on the same page.  Nope.  That's why Bill didn't support Donald.  They have their tribal beliefs, they just don't have facts.

It's a shame that Oliver's followers are so misled and confused.  I'd tell them Hillary is Little Miss Scoop Jackson but I know that'd fly over their heads as well.

As inane and ahistorical as Bob Somerby, you get a Willis follower whining about the way Bill Clinton was treated.

They have no conception of reality.

They show up as drive-by e-mails whenever we note the Kurds and whine that things that happened in the past just didn't happen or they'd know about them.  For example, we regularly observe that you can't discuss the US government's relationship with the Kurds seriously without referencing the Pike Report which the US Congress produced but then quickly decided not to release.  It was leaked to the press and, February 16, 1976, The Village Voice published Aaron Latham's "Introduction to the Pike Papers."  Latham explained:

In 1972, Dr. Henry Kissinger met with the Shah of Iran, who asked the U.S. to aid the Kurds in their rebellion against Iraq, an enemy of the Shah.  Kissinger later presented the proposal to President Nixon who approved what would become a $16 million program.  Then John B. Connally, the former Nixon Treasury Secretary, was dispatched to Iran to inform the Shah, one oil man to another.
The committee report charges that: "The President, Dr. Kissinger and the foreign head of state [the Shah] hoped our clients would not prevail.  They preferred instead that the insurgents simply continue a level of hostilities sufficient to sap the resources of our ally's neighboring country [Iraq].  The policy was not imparted to our clients, who were encouraged to continue fighting.  Even in the context of covert action, ours was a cynical enterprise."
During the Arab-Israeli war, when the Kurds might have been able to strike at a distracted Iraqi government, Kissinger, according to the report, "personally restrained the insurgents from an all-out offensive on the one occasion when such an attack might have been successful."
Then, when Iran resolved its border dispute with Iraq, the U.S. summarily dropped the Kurds.  And Iraq, knowing aid would be cut off, launched a search-and-destroy campaign the day after the border agreement was signed.
A high U.S. official later explained to the Pike committee staff: "Covert action should not be confused with missionary work."


That is the root and start of a relationship where the US government repeatedly used and misled the Kurdish people and repeatedly lied and broke promises.  And we've noted it repeatedly over the years and the typical Willis follower shows up to 'explain' that we must mean the Church report by Frank Church and . . .

No, you uninformed fools, I know what I'm talking about because I'm not the fool who believes media criticism started with Bob Somerby.

I also don't believe it started with Nora Ephron but I know her work at ESQUIRE -- and the essay she published in MORE that ESQUIRE refused, the one about the Pike Report -- was more important than everything Bob's ever written combined.


"Our movement and people are being destroyed in an unbelievable way, with silence from everyone.  We feel, Your Excellency, that the United States has a moral and political responsibility toward our people, who have committed themselves to your country's policy."
That could have been written last week to President Bush by Massoud Barzani, leader of the devastated Kurds.  It was, in fact, written by his father, the legendary Gen. Mustafa Barzani, to Secretary of State Henry Kissinger on March 10, 1975.
It was a cry of anguish to the United STates government, which three years earlier had organized a Kurdish insurrection against Saddam Hussein as a favor by President Nixon to the shah of Iran, only to abandon the Kurds to destruction when the Iranian and Iraqi leaders settles their border dispute.
The letter will be found in the suppressed 1976 report of the House Select Committee on Intelligence, headed by then-Rep. Otis Pike, D-N.Y., which had investigated the misdeeds of the CIA.  The House of Representatives, at the urging of President Ford and the CIA, voted to suppress the report, of which I had a draft.  To this day, the draft in my possession contains the only public record of the betrayal of the Kurds and to this day, the Pike Report has not been released, although accounts of it have appeared in the press.


A lot of liars in the US media don't want you to know about what happened.

In September, when the Kurds were being attacked and the US government refused to come to their aid, a lot of liars in the press looked the other way.

Would Daniel Schorr?  Probably, he was never known for honesty or for courage.  (That's why he fingered Lesley Stahl, after all -- don't ask Bob Somerby, he won't know.  He can watch a lot of MEET THE PRESS, he just can't handle historical.)

When the Kurds, last fall, refused to follow US orders and stop the push for independence, some felt they were foolish.

It's the smartest thing they ever did.

Since Nixon, they've been lied to and misled by the US government.

The US government is not their friend.

The US government has always used them and always lied to them.

Since 1973, the US government has pretended to support their independence -- always telling them, at the last minute, the time isn't right.

When is the time right?

43 years later, last September, they were still being told they'd have to wait.


Kissinger infamously declare the lies weren't part of "missionary work" and apparently many agree that you can lie to the Kurds over and over and it's fine and dandy.


$7 trillion.  That's the current estimate costs for the Middle East wars.  That does include the expected costs that veteran healthcare will add to the total.

President's first tweet of the day spotlights infrastructure and ridicule of U.S. funds spent in Iraq and Syria.

This will be a big week for Infrastructure. After so stupidly spending $7 trillion in the Middle East, it is now time to start investing in OUR Country!

Over the weekend, a number of outlets -- especially in the Arab world -- whined -- yes, I use that term intentionally -- that the US government, under Donald, is saying it won't foot the bill for reconstruction in Iraq.

Sorry but the Iraq War has continued year after year and these same outlets have not called that out or called out the bombings -- the daily bombings -- that began in August of 2014.

Defeat of ISIS in Iraq Caused $45.7 Billion in Damage to Infrastructure, Study FindsThe U.S.-backed military campaign that defeated Islamic State militants in Iraq has resulted in $45.7 billion in damage to the country’s houses, power plants, schools and…

Did you miss the realities in real time?

It's past time that the US government spent money on the US infrastructure.


Donald's Tweet needs to be read in that context and in the context of what is taking place in Kuwait.

Saudi Arabia to reopen its consulate in Basra for the for first time since 1990 as #Iraq, #Saudi ties continue to strengthen. 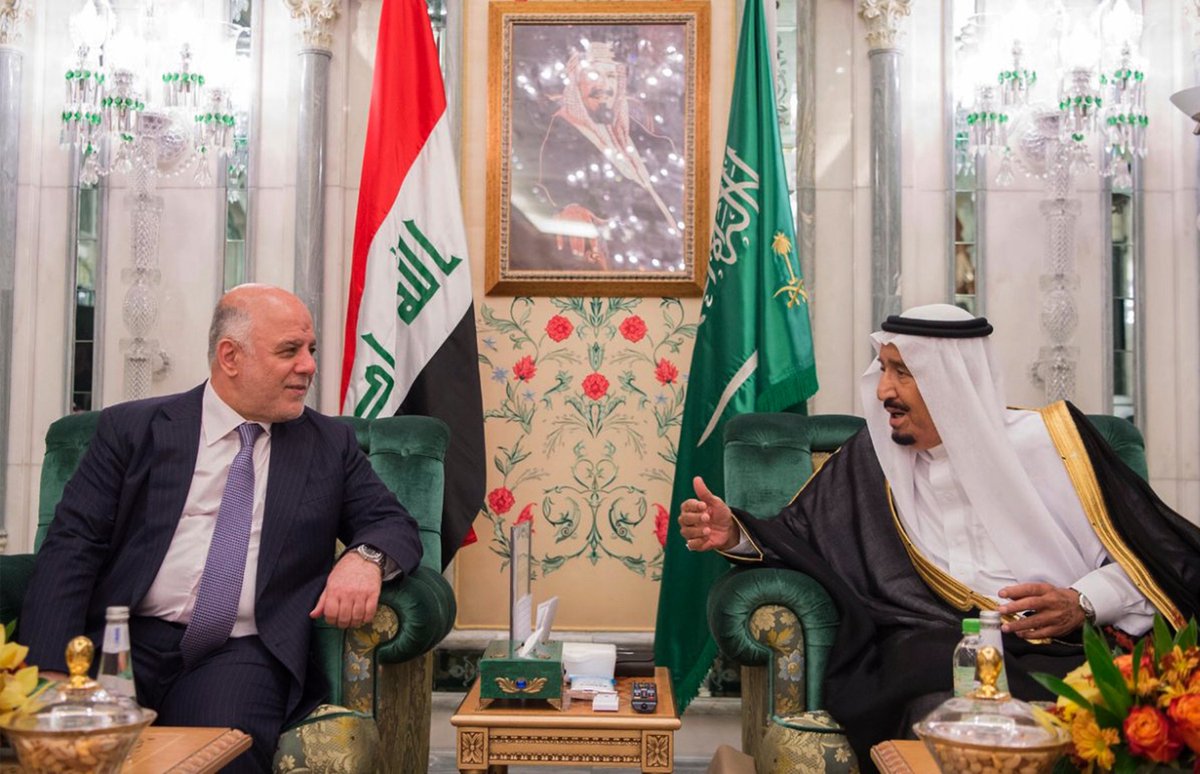 
Heading to #Kuwait for meetings with our entire 74-member global @coalition to defeat #ISIS. This will be the largest gathering to date as our coalition continues to grow and strengthen. Intensive focus on stabilization in #Iraq & #Syria, and combatting ISIS’s global networks.


Information and knowledge only work if you apply them.