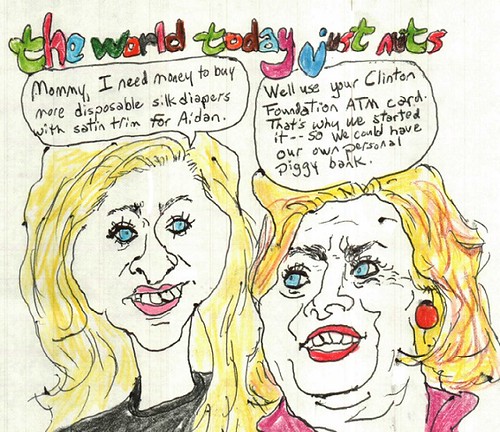 Isaiah's THE WORLD TODAY JUST NUTS "The Clinton Piggy Bank."  In earlier times, the Clintons would be ashamed of themselves to have their greed and corruption revealed in public.

Hillary's so corrupt that apparently it doesn't even matter to her.

From one fraud to another fraud: ObamaCare.


More than six years after it was signed into law, and nearly four years after it began operation, the Affordable Care Act (ACA) is increasingly acknowledged to be a disaster. The viability of the scheme it authorized is openly being called into question, even by its proponents. The Obama administration’s signature domestic “achievement” stands exposed as a plan concocted by and for the insurance companies and corporate America to slash their costs and increase their profits.


As the World Socialist Web Site explained as early as 2009, the health care “reform” that is popularly known as Obamacare establishes a framework for the insurers, the corporations and the government to drastically reduce the health benefits available to low- and middle-income individuals and families.


This was always the aim of the legislation. The gutting of benefits and increase in costs for working people are not the unfortunate outcomes of a well-meaning but misguided effort to provide “near-universal, quality health care,” as President Obama claimed at its inception. As the New York Times, an early, fervent and continuing supporter of Obamacare, recently acknowledged, referring to the barebones government health program for the poor, “[T]he reality is that a typical Obamacare plan looks more like Medicaid, only with a high deductible.”


Under the ACA’s “individual mandate,” anyone without employer-sponsored coverage who is not covered by Medicare or Medicaid is required under threat of a significant tax penalty to purchase private insurance. Today, large numbers of people are struggling or unable to pay the exorbitant premiums demanded by the private insurers for their shoddy plans, while those who do are forced to self-ration care for their families under the weight of sky-high out-of-pocket costs.

And not only to those who can't afford it have to self-ration, they also get hit at the end of the year with a penalty tax when they do their tax return.

ObamaCare is a failure.

That's only surprising if you didn't grasp that the country needed Medicare for all.


Tuesday, August 23, 2016.  Chaos and violence continue, a robot will be sent into Mosul to fight the Islamic State, the Shi'ite militias plan for a post-Islamic State Iraq, Hillary Clinton Tweets about Iraq (no, she's not getting honest), and much more.

So Hillary has the woman's husband killed and then wants to act as though the $35,000 is the larger crime?

There is no 'moral' ground for Hillary to stand on.

She's a War Hawk and a liar.

She and her cult of liars have tried to water down her vote (and ignore her support) for the Iraq War.

Some, comfortable in the knowledge that Elizabeth Edwards is dead, try to trot out the lie that Hillary was only voting for what she hoped was a UN resolution that would follow.

Elizabeth called it a lie when she was alive noting that her husband John Edwards did that but that Hillary was supporting war regardless.

Clinton explained to the Council on Foreign Relations in December 2003, “I was one who supported giving President Bush the authority, if necessary, to use force against Saddam Hussein. I believe that that was the right vote….I stand by the vote.” Of course this was in the immediate aftermath of the invasion of Iraq and subsequent capture of Saddam Hussein, a time when one could still justify support for a war that, just a few years later, proved to be politically unpalatable, to say nothing of it being an egregious war crime, as we all knew from the beginning.


And Hillary was not perturbed in the slightest at the hundreds of thousands of women and children whose lives were irrevocably destroyed by the war and its aftermath, one which is still being reckoned with today.

Or as Cindy Sheehan puts it:

The bottom-line is that the Democrat nominee is already a devoted war criminal and the Republican nominee attracts scary support but No Lives will Matter (except the lives of the 1%) to whichever one of these two scoundrels "wins" in November.


Hillary's war killed a woman's husband and Hillary wants to whine that the widow then lost money?

Maybe she did.  I don't know and I have no reason to doubt the widow.

But I also have no reason to listen to Hillary Clinton on 'loss.'

And I gave her a chance.

Check the archives.  In 2008, I was able to say, "Okay, maybe the Iraq War vote was a mistake like she (weakly) says."  But then she went on to become Secretary of State and her war streak isn't a streak, it's her full body.

And she's got no higher ground to stand on from which to point at others.

Frank Erickson wonders to the editors of the DULUTH NEWS TRIBUNE, "How do those who are going to vote for Democratic presidential nominee Hillary Clinton excuse away her support for the Iraq War? "

They ignore the reality that she did nothing to help Iraqi women -- even when a friend and colleague was asking her to do something very minor.

They minimize or ignore her innate secrecy, her disregard for public consent and act as though it's just e-mails.

If Democrats are actually worried about foreign hackers, why aren't they concerned that #HillarysEmails were on an insecure private server?


And there's the whole smarmy nature (and illegal nature) of how Hillary used her post as Secretary of State to enrich The Clinton Foundation.  Rosalind S. Helderman, Spencer S. Hsu and Tom Hamburger (WASHINGTON POST) report:


A sports executive who was a major donor to the Clinton Foundation and whose firm paid Bill Clinton millions of dollars in consulting fees wanted help getting a visa for a British soccer player with a criminal past.
The crown prince of Bahrain, whose government gave more than $50,000 to the Clintons’ charity and who participated in its glitzy annual conference, wanted a last-minute meeting with Secretary of State Hillary Clinton.
U2 rocker and philanthropist Bono, also a regular at foundation events, wanted high-level help broadcasting a live link to the International Space Station during concerts.
In each case, according to emails released Monday from Hillary Clinton’s time as secretary of state, the requests were directed to Clinton’s deputy chief of staff and confidante, Huma Abedin, who engaged with other top aides and sometimes Clinton herself about how to respond.

No wonder she hasn't held a press conference in over 260 days -- she thinks she can ride it out.

She doesn't want to be shown answering questions she has no answers for.

It's not just e-mails.

Barack Obama turned the Iraq mission over to the State Dept in October of 2011.  It collapsed less than a year later because Hillary refused to answer basic questions from Congress.  Gerry Connolly and Gary Ackerman -- both Democrats -- were among those demanding how the money was going to be spent, why money was being wasted on a program the Iraqi government said they didn't want and would not participate in, etc.

The State Dept refused to answer the questions.

She is an enemy of transparency and that's there in her hidden e-mails, it's there in her refusal to release transcripts of her speeches to Wall Street fat cats and it's there in her time as Secretary of State -- four years in which she refused to have an Inspector General -- didn't want the oversight.

And this attitude doomed whatever Barack's plans for a State Dept mission in Iraq would be.


If you believe in Barack, I guess you have to blame Hillary for his refusal to end the Iraq War because if she'd done the mission she was tasked with, maybe the Iraq War would be over.

But she screwed it up like she screws up everything.

Her secrecy and lies always doom her.

And they may have doomed Barack's plan to end the Iraq War.

Instead, the Iraq War continues.

Yesterday, the US Defense Dept announced:

-- Near Bashir, a strike destroyed an ISIL checkpoint.

-- Near Haditha, a strike struck an ISIL tactical unit and destroyed a fighting position.

-- Near Qayyarah, a strike struck an ISIL tactical unit and destroyed a mortar system, a vehicle, five assembly areas, a supply cache and a front-end loader and denied ISIL access to terrain.

-- Near Ramadi, two strikes struck an ISIL tactical unit, a vehicle and a boat and damaged a fighting position.

-- Near Sultan Abdallah, a strike struck an ISIL security headquarters.

And these bombs fall on populated land -- meaning civilians are at risk.

Meanwhile, the Shi'ite militias that Prime Minister Haider al-Abadi brought into the government are planning for a post-ISIS Iraq which they intend to rule.  Adnan Abu Zeed (AL-MONITOR) reports:


On July 26, the Iraqi government announced that the Popular Mobilization Units (PMU) will be converted into “an independent military formation affiliated with the armed forces’ commander-in-chief.” The Shiite force was formed in June 2014 in response to religious calls to take up arms against the Islamic State (IS).
Iraqi Prime Minister Haider al-Abadi’s decision sparked an uproar among Iraq’s Kurds and Sunnis. On Aug. 14, the Kurdish news site Rudaw collected the opinions of analysts and ordinary citizens, all of whom criticized the move as a step toward forming a parallel military force.
Other reports claimed that the government’s decision to take control of the PMU, which participated in the liberation of Salahuddin, Ramadi and Fallujah and are planning to join the battle for Mosul, reflects “a plan to establish a guard similar to Iran’s Revolutionary Guard Corps.”

The Islamic State has now occupied Mosul for over two years.

And still occupies it.


Clara Strunck (DAILY STAR) reports that they will be using a robot to combat ISIS in Mosul:


The car-sized tank can be directed from up to a kilometre away and has four cameras on board that feed information back to the laptop operator.
It is designed to conduct highly specific attacks while the "driver" sits in safety further away.
According to reports in the Baghdad Post, the tank will be used to liberate an ISIS-held town and has been named Alrobot – Arabic for robot.

The Islamic State has controlled your city for over two years and your 'brave' answer is to fight it with a robot?


No wonder Mosul's been occupied for two years and counting.