Sanders offers nothing but exhaust fumes

And, of course, the Shade of Cockburn is right. Pull the Sandersmobile into the garage for inspection, pop the hood and you’ll soon discover the vacuous truth: no engine, just an exhaust pipe, pumping out rhetoric. So much talk, so little action. The deeper you look at Sanders, the less substance you see.

The real problem with Bernie is that he won’t allow you to suffer illusions. Obama was a neophyte, with hardly any record, except the ominous warning signal that flashed when he picked Joe Lieberman as his senatorial mentor. It was easy to inhale the aroma of hope and become momentarily intoxicated. Bernie has a 40-year record as a politician. He is what he is. To say what he is and what he has done is not to imitate Cassandra at the wall, predict the flames of the future, but is more akin to the task of Tacitus combing through the dusty annals, year after year, of a politician who promises one thing and delivers, time and again, something else entirely.

These are the times when I wish the psycho-historians were still active to put the Liberal-Left onto the couch. The left-wing of the Democratic Party has been abused since at least the Jackson campaign, but the decades of abuse by the party establishment only draw them tighter into the grip of the abusers. They are constantly on the hunt for the Good Father and they see him in the strangest incarnations: Dennis Kucinich, Mario Cuomo, Paul Wellstone, Barack Obama. They are so desperate to be accepted, to be loved, to be coddled, that they remain completely blind to the fact that they are about to be tasered back into submission.


I'm too old to keep falling for this crap.

The fake-asses who pretend they're about change but keep supporting policies that harm America.

If the Democratic Party wants to serve America and return to at least the basics of FDR, I'm interested.

Saturday, August 8, 2015.  Chaos and violence continue, protests return to Iraq in a big way, Haider al-Abadi hails them as an early warning sign, Ayad Allawi calls for the security forces to respect the right of peaceful protests, Turkey continues bombing northern Iraq, Haider al-Abadi compares and contrasts Turkey with Iran, and much more. 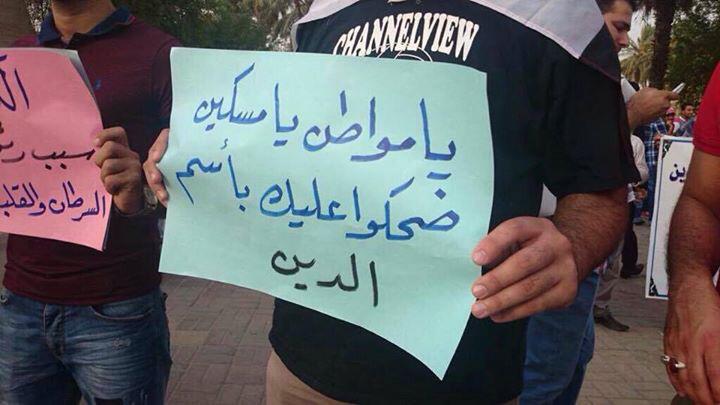 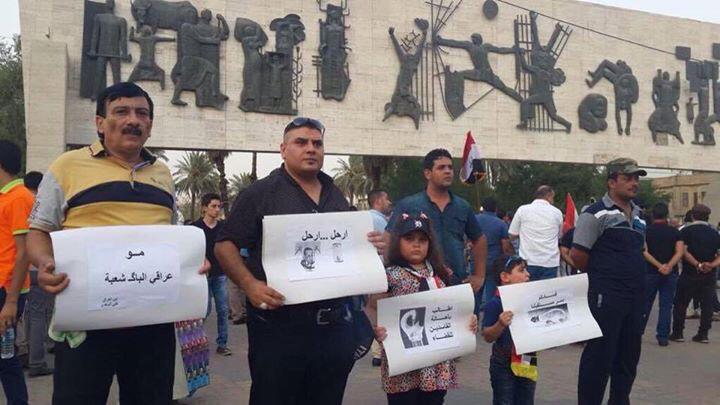 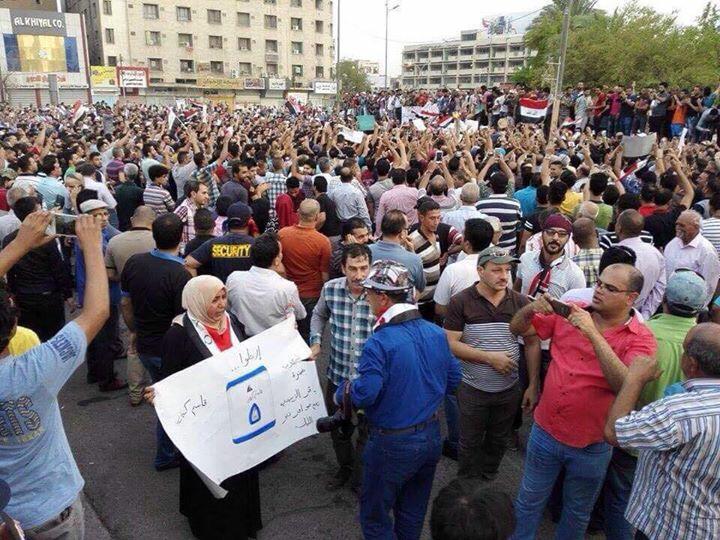 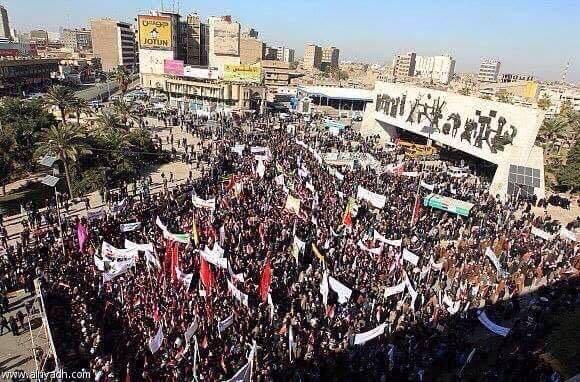 
The protests took place in may parts of the country recalling the last wave which kicked off in December 2012 and lasted through January 2014.

Back then, Nouri al-Maliki was prime minister.

They did not have new complaints.

And while it's true that citizens of Basra had already taken to the streets last month to protest, these complaints go further back.


They are among the complaints Iraqis made when they kicked off the December 2012 protests.

These grievances were real and genuine and they remain unaddressed.

Nouri al-Maliki may be 'gone' (as Mike noted recently, it's hard to call him gone when he is now one of three vice presidents of Iraq) and Haider al-Abadi may be the new prime minister -- for approximately a year now -- but the grievances remain.

Also a grievance in the protests that kicked off in January of 2011.

To stop those protests, Nouri al-Maliki insisted if the protesters would leave the streets, he would end corruption in 100 days.


In a statement at his website, Grand Ayatollah Sheikh Basheer Hussain Najafi declares the cancellation of the card system will have negative consequences.  If corruption was a problem, the statement notes, then this is an indication that the anti-corruption campaign failed.  The Grand Ayatollah is calling for an explanation and says it is needed quickly.

The anti-corruption campaign is a failure?  That may refer to when Nouri grew nervous as Iraqis took to the streets in large numbers at the start of 2011.  As February was winding down, Nouri was making many promises to try to hold on as prime minister.  The Iraqi people had many demands and many justifiable complaints.  There was the lack of jobs, there was the lack of public services (dependable electricity, potable water, etc.), there was the many 'disappeared' who had vanished in Iraq's 'justice' system.  There was also the issue that they had voted and nothing had changed.  Despite the outcome of the March 2010 election (Iraqiya came in first, Nouri's slate came in second), their votes were overridden.  Nouri remained prime minister.  Jalal remained president.  Why did they even vote?  (This was stated in word in speeches and to reporters and also in signs carried.)  Nouri was spinning like crazy.  And give him 100 days, he'll address corruption, he'll address jobs, he'll pull the moon from the sky and waltz it across Baghdad.

100 days came and went and nothing.  Nouri plays kick the can with every problem.  That means he refuses to address it.  He kicks on down the road for a later time that never comes.  He hopes to exhaust his rivals and he hopes to exhaust the Iraqi people.  That has been his pattern since 2006.

He made those promises as the Arab Spring or 'Arab Spring' was sweeping the region and various rulers feared the people might run them out of office.

Iraq was ignored by the US cheerleaders for the Arab Spring (that would include Corrente which laughable claimed to be live blogging it).

But the protests in Iraq were rooted in genuine complaints and grievances and when the protests returned in December 2012, it was interesting to watch the Corrente types continue to ignore it -- even when protesters were attacked by government forces, even when Nouri had them attack reporters covering the protests (Corrente, like the New York Times, ignored this -- NPR and the Washington Post were two US outlets that covered the attacks).

It came and went.

All that happened was that Adel Abdul-Mahdi departed his post.

The Islamic Supreme Council of Iraq member was one of Iraq's two vice presidents during Nouri al-Maliki's first term -- Tareq al-Hashemi was the other.  He and al-Hashemi were named vice presidents for a second term in November 2010.  Later a third vice president was named.  Iraq dropped back down to two vice presidents after the national protests and Nouri's promise to meet the demands and to address corruption in 100 days.  When Nouri failed to do so, Adel Abudl-Mahdi announced he was resigning and cited the government's inability to address the needs of the people or the corruption.

The protests have returned.

And, as All Iraq News notes, the Iraqi Parliament has issued a statement supporting the protests on the issue of the lack of electricity.  Also supporting the electricity protests?  Vice President Ayad Allawi.  Alsumaria notes this and that he's called for the security forces to respect the right of peaceful protest.


The reason the protests have returned is because Haider al-Abadi has done nothing to address these and other concerns.


Alsumaria reports Haider al-Abadi is calling the protests "an early warning sign" and insisting that austerity policies must be followed.

Well that's what the International Monetary Fund (IMF) imposes and that's why you never should take their dirty, blood money.  Once you do, they own you.

Iraq never needed some billions from the IMF.

Dirty men like the State Dept's Brett McGurk stroked their dirty dicks to orgasm over the IMF loan and cowards like Antonia Juhasz refused to speak out.

Iraq brings in billions from oil each year.  It is not Ethopia.

It's annual budget is enough to make every Iraqi citizen a millionaire several times over.


The IMF loan was never about helping Iraq.

It was about controlling Iraq.

The clerics in Iraq who warned about it were ignored.

Betty says this site was the only one to call out the IMF deal in the US.  I hope that's not the case but I honestly am not aware of anyone calling out the deal.  (If you did, the e-mail is common_ills@yahoo.com and we will gladly note you.)

Haider al-Abadi was not installed last year by the White House because he was someone who would fight for or protect the Iraqi people.

He is as corrupt as Nouri.

Like Nouri, he is a Dawa Party member and he also was part of Nouri's State of Law coalition and Arabic social media has been filled with video of the two men giddy and giggling over shared secrets.

Anyone could have been.

But Nouri was so corrupt and so out of control that Iraq could not survive a third term.

The people of Iraq needed to know that there was a chance at change in some way or form.

And he has failed to change anything.

Which is why people are again taking to the streets.

People, of course, include reporters and they staged a sit-in today in Baghdad calling for Article 14 of to be repealed.

Protests also took place in northern Iraq's KRG where protesters gathered before the KRG Parliament to lodge their objections to the Turkish war planes dropping bombs on the region.


On the first day of the new month, UNAMI releases their death toll figures for July.