Salads in the Kitchen

Bill e-mails with a problem.

He buys lettuce but usually when he gets around to making a salad, either the tomatoes are bad or he's forgotten them so he just uses the lettuce on a sandwich instead.

But you don't need them to make a salad.

Chop up the lettuce and add other things to it.

You can add carrots and radishes, for example.

You can slice an onion into rings and add that.

If you're someone who has to have a tomato taste for it to be a salad and you have no tomatoes?

Kraft makes a great vinaigrette from sun dried tomatoes.  You can add that to a salad to get a tomato taste.

But there are many ingredients you can add (including bell peppers and banana peppers).  So think beyond the basics.

Thursday, March 3, 2016.  Chaos and violence continue, efforts to prop up Haider al-Abadi continues, Moqtada al-Sadr claims death threats against him, Brett McGurk visits Iraq, a former ally of Hillary Clinton's makes an immunity deal with the FBI, and much more.

Her e-mail scandal continues to haunt.  And a new development has many people talking -- a former employee has made a deal to testify with the FBI to talk in exchange for immunity.   Judge Andrew P. Napolitano (WASHINGTON TIMES) offers his analysis which includes:


It is fair to call this a scandal because it consists of the public revelation of the private and probably criminal misdeeds of the nation’s chief diplomat during President Obama’s first term in office. Mrs. Clinton’s job as secretary of state was to keep secrets. Instead, she exposed them to friend and foe. The exposure of state secrets, either intentionally or negligently, constitutes the crime of espionage. For the secretary of state to have committed espionage is, quite simply, scandalous.
We are not addressing just a handful of emails. To date, the State Department has revealed the presence of more than 2,000 emails on her private server that contained state secrets — and four that were select access privilege, or SAP. The SAP emails require special codes in order to access them. The codes change continually, and very few people in the government have the codes. SAP is a subcategory of “top secret,” and it constitutes the highest level of protected secrecy, for the utmost protection of the government’s gravest secrets. It is unheard of for SAP-level data to reside in a non-secure, vulnerable venue — yet that is where Mrs. Clinton caused four SAPs to reside.
Mrs. Clinton’s allies in the State Department have perpetrated the myth that the 2,000 emails were recently upgraded to reflect their secret contents. That is untrue. The emails possess secret status by virtue of their contents, not because of any markings on them. Mrs. Clinton had a legal obligation to recognize state secrets when she saw them, no matter their markings or non-markings. On her first day on the job, she swore under oath that she recognized and understood that legal obligation and she promised to comply with it. She did not comply.

Hillary Clinton is a psychopath and a war criminal, [who said] “we came, we saw, he died,” mimicking Julius Ceasar and laughing hysterically after Colonel Kaddafi, my former client, was sodomized with a knife and beaten to death. She’s a certified psychopath and war criminal.

The Justice Department has granted immunity to the former State Department staffer who worked on Hillary Clinton’s private email server as part of a criminal investigation into the possible mishandling of classified information, according to a senior law enforcement official.

The official said the FBI had secured the cooperation of Bryan Pagliano, who worked on Clinton’s 2008 presidential campaign before setting up the server in her New York home in 2009.


First he said he would invoke his Fifth Amendment rights but now the IT specialist, who set up Hillary Clinton's controversial private email server, is ready to cooperate with the FBI.
In doing so, Bryan Pagliano, 39, has been granted immunity by the Justice Department as it continues its criminal investigation into whether or not the current Democratic Presidential candidate mishandled classified information.
The immunity deal has many observers commenting.  Chris Cillizza (WASHINGTON POST) offers:


The kindest possible reading of this news for Clinton is that Pagliano was simply nervous to talk about how -- and why -- he had set up the email server, and granting him immunity lets him speak freely without any concern that he might get into trouble.
Maybe. But it's my strong impression that the Justice Department doesn't go around granting immunity to people unless the person getting the immunity may be able to shed light on an important part of the investigation. After all, if Pagliano a) knew nothing or b) did nothing wrong, why would he need immunity to talk to the FBI?

Though many are making similar conclusions, not all observers are.  Matt Zapotosky (WASHINGTON POST) notes:

That is because the line between what is classified and what is not is “not inherently obvious,” and charging the former secretary of state would require prosecutors to prove that she knew what she was handling crossed that line, said Barry J. Pollack, a white-collar criminal defense lawyer at Miller & Chevalier who defended convicted CIA leaker Jeffrey Sterling

“If something has not been deemed classified, you’re asking a person to intuit how somebody else would make a subjective decision and hold that person responsible for the fact that they didn’t anticipate that somebody else might view the document as classified,” he said. “It’s almost a Rorschach test. Different people view it differently.”

Despite the above and so much more, the media chorus is for . . . Senator Bernie Sanders to see his campaign as over.  The independent or 'independent' US media has taking to singing the same song over and over as David Sirota notes;


Again, the call is for Sanders to read the writing on the wall.


In earlier times, in better times, it would be the one accused of not protecting state secrets who the media would be insisting end their campaign.

Today, the US Defense Dept announced/claimed/insisted:


Strikes in Iraq
Attack, fighter, ground-attack, and remotely piloted aircraft conducted 21 strikes in Iraq, coordinated with and in support of Iraq’s government:

-- Near Baghdadi, a strike struck an ISIL tactical unit.

-- Near Habbaniyah, a strike destroyed an ISIL anti-air artillery piece.

-- Near Ramadi, three strikes destroyed an ISIL vehicle, an ISIL front-end loader, an ISIL bed down location, and an ISIL petroleum, oil and lubricant truck.

-- Near Sultan Abdallah, one strike struck an ISIL tactical unit and destroyed an ISIL fighting position.


Task force officials define a strike as one or more kinetic events that occur in roughly the same geographic location to produce a single, sometimes cumulative, effect. Therefore, officials explained, a single aircraft delivering a single weapon against a lone ISIL vehicle is one strike, but so is multiple aircraft delivering dozens of weapons against buildings, vehicles and weapon systems in a compound, for example, having the cumulative effect of making those targets harder or impossible for ISIL to use. Accordingly, officials said, they do not report the number or type of aircraft employed in a strike, the number of munitions dropped in each strike, or the number of individual munition impact points against a target.


ALSUMARIA reports a Baghdad mortar attack has led to twelve dead and wounded.  The news outlet also notes a home invasion south of Baghdad left 1 man and 2 women dead and that an armed attack in Muqdadiyah left at least one person injured. 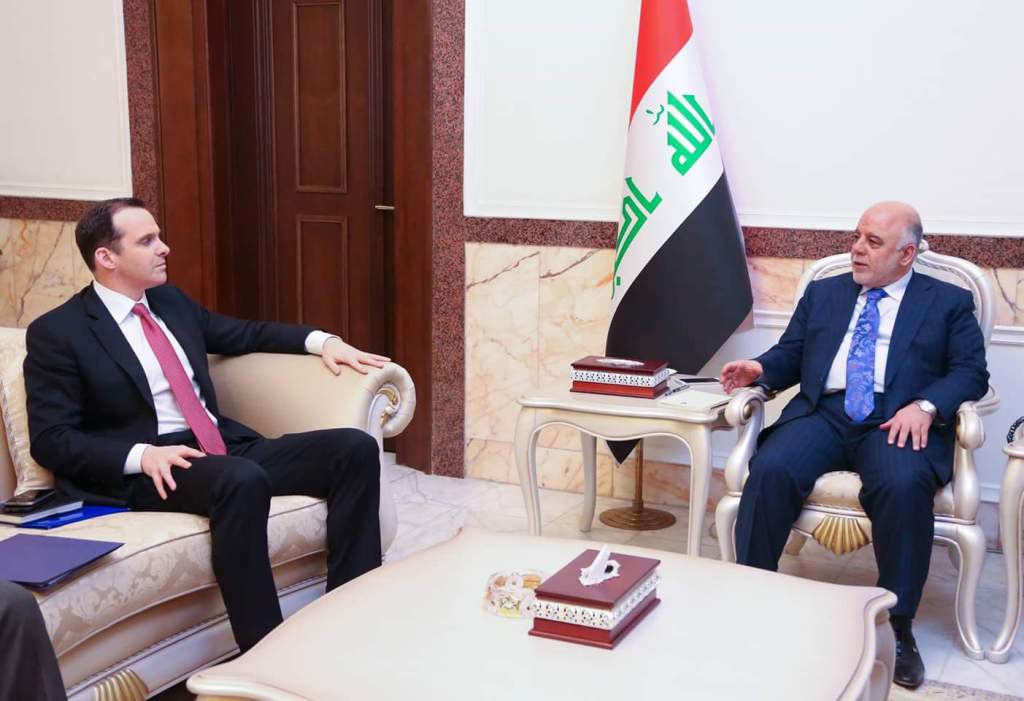 Brett hasn't lit up Arabic social media with his visit, however, a large amount of discussion revolves around a rumored trip by Joe Biden in the next week to Iraq.

Meanwhile, a joint press conference was supposed to take place today.  NATIONAL IRAQI NEWS AGENCY reports that cleric and movement leader Moqtada al-Sadr was supposed to participate in a satellite press conference with the leader of the Islamic Supreme Council of Iraq Ammar al-Hakim and that journalists were present and waiting when the delay turned into a cancellation with no explanation offered.

Last Friday, Moqtada sent his followers into Baghdad's Tahrir Square to show support for reform measures that Haider had proposed a week before.

He has called for his followers to turn out this Friday at the gates of the Green Zone.

It's not a protest.

If you doubt it, ALL IRAQ NEWS reports Baghdad Operations Control has announced they will be providing security for the rally.


Of course, they didn't protect real protesters, not from December 2011 through Janaury 2014, when actual protests took place in Baghdad.

Of course, they may be bringing their own protection or 'protection.'


The topic of the failed press conference is not known.

Nor is it know why it was cancelled but ALSUMARIA reports Moqtada has publicly vowed he will reach the protesters in spite of death threats.


Death threats may or may not have led to the cancellation of the press conference.

On those reforms that Haider's called for and Moqtada is backing, former prime minister Nouri al-Maliki is saying that they must be real and not for show.  Nouri's political slate, State of Law, has had various members tossing water on the reforms proposals in the last six days.  And Nouri's not fading away.  ALL IRAQ NEWS notes he met today with the Special Envoy for UN Secretary-General Ban Ki-moon.


While Nouri plots his return, Haider tries desperately to hang on to the post of prime minister and to push through reforms or 'reforms.'   As Sheikh (DAR ADDUSTOUR) notes rumors of efforts on the part of Haider to make backdoor deals with members of the National Alliance (largest Shi'ite political alliance in Iraq) in order to push through his reforms or 'reforms.'

The White House
Office of the Vice President


The Vice President spoke with Iraqi Prime Minister Haidar Al-Abadi today and offered condolences to the people of Iraq targeted by ISIL’s indiscriminate and cowardly attacks in Baghdad and other cities.  The Vice President reaffirmed the United States' unwavering commitment to Iraq’s unity and stability in the fight against ISIL, including coalition military assistance as requested by the Iraqi government.  The Vice President also pledged continued U.S. support as Iraq seeks to stabilize and strengthen its economy and reiterated the U.S. commitment to work with G-7 and other international partners, as well as international financial institutions, to ensure Iraq has the financial resources it needs to fight ISIL.  The Vice President reassured Prime Minister Abadi of the United States’ steadfast support for Iraq’s sovereignty and territorial integrity and its efforts to establish positive relations with regional states based on the principle of non-interference, under the Strategic Framework Agreement.


Lastly, at FIRST THINGS, a joint-statement has gone up decrying the genocide of Christians in Iraq and in Syria:


In the name of decency, humanity, and truth, we call on President Barack Obama, Secretary of State John Kerry, and all members of the United States Senate and House of Representatives to recognize and give public expression to the fact that Christians in Iraq and Syria—along with Yazidis, Turkmen, Shabak, and Shi’a Muslims—are victims of a campaign of genocide being waged against them by ISIS. In pleading that this genocide be recognized and called by its name, we join Pope Francis, the United States Commission on International Religious Freedom, the European Parliament, and many others. We urge our fellow Americans and all men and women of goodwill everywhere to join us in prayer for those of all faiths who are victims, and in determination to act in the humanitarian and political spheres to aid them and put an end to their victimization.
Robert P. George, McCormick Professor of Jurisprudence and Director of the James Madison Program in American Ideals and Institutions, Princeton University
Cornel West, Professor of Philosophy and Christian Practice, Union Theological Seminary and Class of 1943 University Professor in the Center for African American Studies, Emeritus, Princeton University